Okisaki Shogi is a game based on Shogi but on a 10x10 board and with Queens and Knights. Knights replace Helms. Queens go between the King and one of the Goldgenerals, although whether Kings share one file and Queens another or each Queen shares a file with the enemy King I have yet to confirm. My suspicion is that each player has the King on their right and Queen on their left, to balance the Rook on their right and Bishop on their left established from standard Shogi, and I have modelled this 3d version on that assumption. If anyone knows the Okisaki array I would be grateful if they post an Okisaki page on the site. Another Okisaki innovation is to make the corner piece a Rook restricted to moves taking it to any other rank, not just those ahead of it. This is termed a Reverse Chariot in Shogi variants, or a Rookranker in Man and Beast terminology.

For my expansion to a cubic board I decided to retain a face-to-face orientation to keep the meaning of "forward", so important in Shogi, simple. What I noticed first was that on such a board the Rookranker is joined by a Bishoranker - a Bishop restricted to moves that change rank. In 3d the Queenranker, known in Shogi variants as Flying Ox, is the Rookranker's compound specifically with the Bishoranker rather than the full Bishop. These pieces were pioneered in Quadlevel, a 3d Chess intended to emulate how some FIDE pieces can change rank and others cannot. The linepiece whose full symmetric move must change rank in 3d in the way that the Bishop's must in 2d is the Unicorn.

This inspired me to make the Unicorn's directions or nonstandard diagonals (NDs) the analogue of 2d diagonals and have three strands of analogues to 2d orthogonals. These would be the actual orthogonals, the Bishop's directions or standard diagonals (SDs), and both combined. This neatly led to three strands of Shogi-piece analogues, and numbers of piece types suiting three styles (described for convenience as sizes) of Shogi set. As however some Goldgeneral analogues are more worth promoting than some Queenwise pieces, a physical Shogi piece does not necessarily represent its analogue - especially as I assume non-Okisaki physical sets.

The Bishop has only the one analogue, of course, and I also "topped and tailed" with just Queenwise analogues. Oblique directions I dispensed with altogether. For these reasons, although each file has the same piece density as non-Okisaki 2d Shogi - 4 times as many pieces and cells - I suggest using 5 Shogi sets, 1 of the largest and 2 each of the others. This coincidence in piece density also prompted me to revert to 9 ranks rather than the 10 of Okisaki Shogi as 3 lots of 3 ranks appealed more to my aesthetic sense, especially when other diomensions are divisible by 3 as well.

Ranks are numbered 1 to 9, filestacks lettered a to f, and levels lettered u (top) to z (bottom). 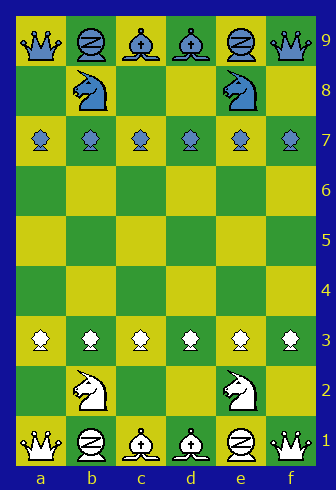 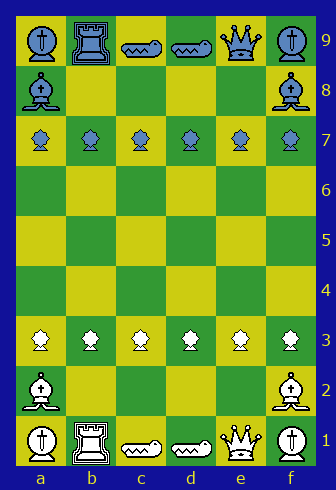 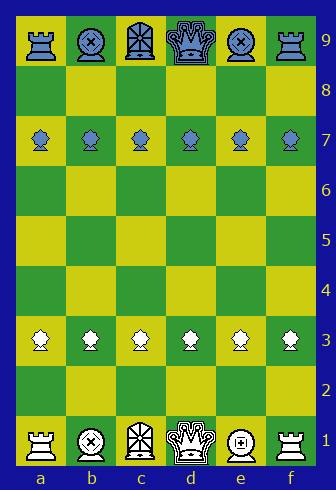 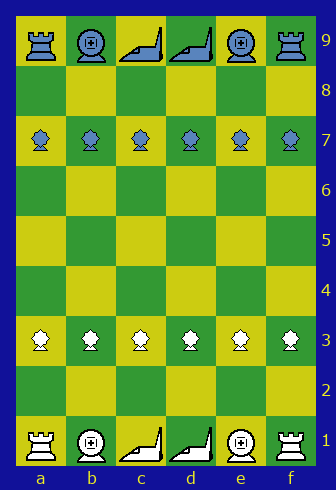 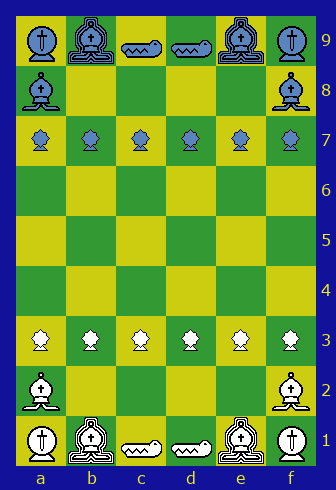 Level z
same as Level u

I have made use of this image set to get satisfactory images for all pieces, including promotees.

Promotable pieces can be promoted at the end of any move entering, moving within, or leaving the three ranks of the enemy camp. In the case of the Rookranker/Goldgeneral and Bishoranker/Silvergeneral the switch can be made either way at the end of such a move, as both forms of the pieces have their advantages and disadvantages. A Princeling reaching the far rank must be promoted.

A player capturing an enemy piece may later, in place of a normal move, add that piece to their own army, in its array form on a cell where promotion would not be compulsory.