This variant is inspired by the logo of an organisation that my father used to work for, the QuANGO English Heritage. The shape is suggestive of a bird's-eye view of a grand courtyarded historic building of the kind for which they are reponsible, while the embattled outer edge hints at the fortification of some such buildings. This secondary connotation ties in with the mediaeval warfare with which Chess is widely associated, and especially the tower shape of Staunton-set Rooks. I wondered whether I could produce a variant on a board of that shape, called Herichess - a reference to heritage being "tHE RICHES Saved for the nation"! I rejected a board of just 28 cells modelled on 1d variants as too restrictive, and a board formed of 28 3x3 (or larger) supersquares as too large, that giving over 250 cells! Therefore I settled on 28 2x2 supersquares, giving 112 cells.

It also seemed logical that with nearer twice than once the FIDE number of cells it should be a 4-player variant, and that with such narrow corridors Bishops and Bishop compounds should be Crooked. Then I threw in a Fusion feature - a rex-exclusive version of the single variation of Fergus Duniho's Fusion Chess - in order to reduce congestion when so many pieces are as confined as they are. This involved adding in Princes to give capturable (and in one case Crooked) versions of Fusion Chess' compound royals, in the same manner that Hybrids adds them to the Straight simple pieces of the FIDE array.

My original array gave each player 4 Boyscouts (Crooked Bishops), two on each binding. Eventually I realised that this board bound Knights as well, but that this did not matter because of Fusion. Therefore I decided to have only two Boyscouts aside as well, as their binding did not matter either. At the same time I dropped the array Boyrooks (half-Crooked Queens), which I realised were an unnecessary complication. This is again in keeping with the lack of FIDE Queens in Hybrids.

Since posting this page I have devised a 3d variant based on the same logo, Raumherichess, with Straight Bishops, array Queens, and no Fusion.

I depict the array in two stages. To the right is the empty board in four colours to illustrate the presence of two kinds of supersquare - to get from one red supersquare to another a piece must pass through a blue supersquare, and (more obviously) vice versa. Below are the actual pieces, which as far as I can see can only be shown on a two-colour board. Note again that diagonal moves are Crooked. 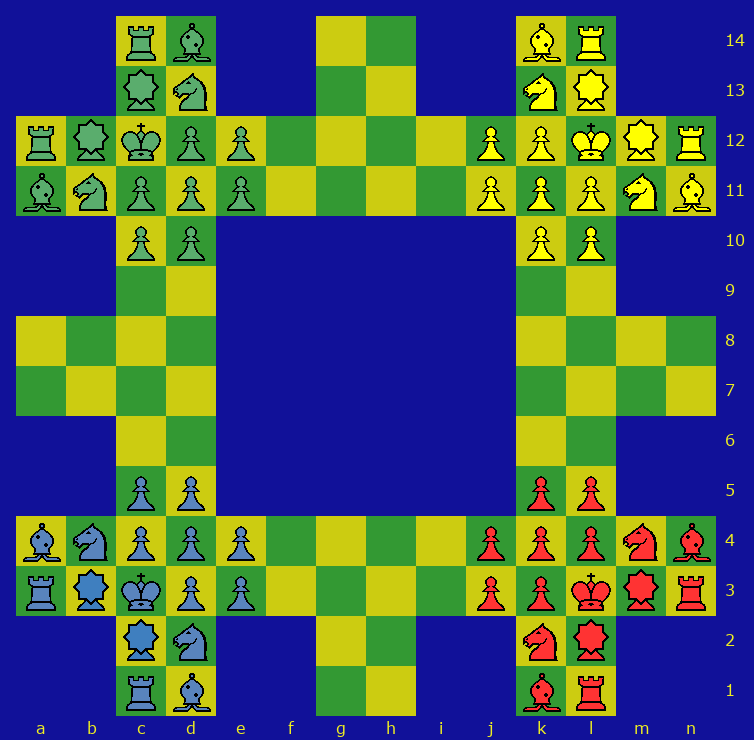 Red plays first, and play proceeds in anticlockwise order. Pawns starting on blue supersquares have an optional noncapturing double-step initial move, but those starting on red ones do not. There is no Castling. All these rules are inherited from my first 4-player variant, Fivequarters, which has 5 4x4 supersquares. A difference arising from Herichess going around rather than through a central area is that En Passant capture is between adjacent-colour Pawns, with no kind of capture possible between unpromoted opposite-colour Pawns (cf Superchess). A Pawn capturing En Passant may have started on either kind of supersquare.

A Pawn reaching an enemy blue supersquare is promoted to a Rook, Boyscout, Prince, or Knight.

FUSION involves moving a Knight, Prince, Bishop, or Rook to a cell already containing a piece of the same army and another of those four kinds. This results in a single more powerful piece. Should this piece be captured, both its components are lost.

FISSION involves using one of the moves available to a compound piece to an empty cell but only moving one component and leaving the other behind. The moving component must be one that could make that move on its own. Thus most moves by a compound piece can have one of two results: the entire compound moves to the destination, or the component whose move is being used reaches the destination and the other remains behind. A Crooked Primate moving one cell diagonally or a Chatelaine moving one cell orthogonally can have three results, as the move is common to both components. Note that a Fusion piece making a capture must remain intact.

A player whose King is en prise to the player about to move is Checkmated and their pieces removed from the game. The Checkmating player then makes their move and play proceeds with the remaining players. The first player Checkmated loses and the player delivering the last Checkmate wins.

Three distinguishable FIDE sets can physically represent the array, with the third set's Bishops representing two players' Princes and its Knights those of the other two. Queens and other set 3 pieces would represent promotees on an ad hoc basis. Compound pieces would be represented by both components on the same cell. Other alternatives are to use (a) two distinguishable Xiang Qi sets or (b) two Shogi sets pointing diagonally. In both cases pieces would be substituted positionally, but with both Cannons and Points representing Pawns in case (a) and Rooks, Bishops, and Tokins being spare for promotees in case (b).

I haven't come up with a satisfactory cell labelling yet. I considered
ABCDEF MN OPQRST
in one dimension and
GHIJKL MN UVWXYZ
in the other so that the two duplicate letters M and N are nowhere used either with the same other letter or in any camp. Any better ideas for notation are welcome.