This 10x8 chess variant was inspired by the larger (12x8) old chess variant Courier-Spiel. It occured to me that 'less might be more', if I reduced that game's board size, and dropped its two pieces that had the same short range characteristics as the guard and centaur piece types. In addition, the (Modern) Elephant piece type might prove more effective, given my chosen smaller 10x8 board size. This game's Elephant is also an old-fashioned third minor piece type that would remain as a possible attraction over standard (8x8) chess, and this apparently without it often taking players too many moves longer to get castled, or to get their rooks connected, as may happen in Courier-Spiel. 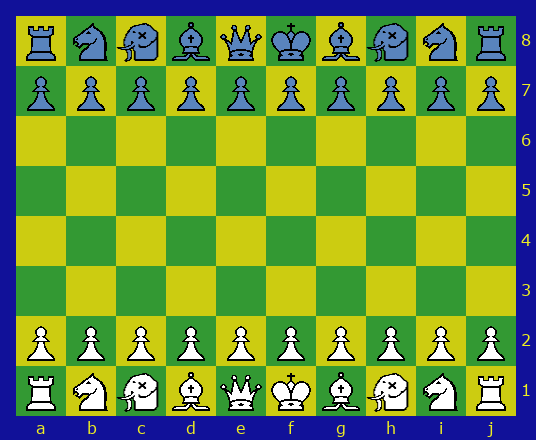 There are 7 piece types in Hannibal Chess, 6 being the same as for standard chess (pawn, knight, bishop, rook, queen and king). The other piece type is the Elephant:

The Elephant is a compound piece that moves like a ferz (one square diagonally) or an alfil (i.e. leaps 2 squares diagonally). Note that this piece type is colour-bound, and is also more formally known as a modern elephant (or ferfil).

Castling is as in standard chess, except a king goes three squares sideways during the process (instead of two squares). Threefold repetition of position is a draw as in chess, and similarly the 50 move rule is also in effect in Hannibal Chess (i.e. game drawn if no captures or pawn moves before 50 consecutive moves by both sides). Pawns move as in chess, and can promote to any piece type included in the setup, except for a king.

For those who might wish to have a physical 10x8 chessboard, Dr. Muller has mentioned elsewhere that a simple solution would be to cover up two ranks of a physical 10x10 chessboard. For those who might wish to search for a more elegant solution, at least in the past such boards were sold in Germany for the 10x8 variant Janus Chess (the pieces of its set could be somewhat suitable to play Hannibal Chess with, too). Here's a link about that game, with the specifics for ordering a set included:

Finally, a variant idea of mine some may wish to try would be Lieutenant Chess. This would use the same rules and setup as for Hannibal Chess, except to replace each side's (Modern)Es with Lieutenants (from Spartan Chess). Lieutenants have the same powers as (Modern)Es, plus they can instead take a single-step non-capturing move sideways, i.e. for one square in either direction along their current rank, and thus they are not colour-bound pieces. On a 10x8 board, such as for this variant idea, I'd tentatively estimate a Lieutenant to have a value of 2.97(or 3 approx.).