4D Hexagonal Chess is played on a hex-shaped four dimensional board of nineteen 2D hex-shaped boards (each with 19 hexagonal cells, & having a peak width of 5 cells), the entire 4D board having a total of 361 cells, with a peak width of five 2D boards. Both sides begin a game with 26 units, i.e. with 1 king, 1 queen, 2 rooks, 3 bishops, 2 knights & 17 pawns. The game is a 4D analogue of Glinski's Hexagonal Chess. In a number of ways it is based on editor Joe Joyce's Hyperchess4 4D variant that uses square cells. Exchanges that Joe & I have had have confirmed some conclusions of mine regarding 4D variants, as well as a number of my concerns about designing any sort of 4D hexagonal variant (these exchanges can be found eventually by searching through the Comments section of The Chess Variant Pages, or that of Hyperchess4's page).

A Game Courier preset for play is available. Note that links to pages for Glinski's Hexagonal Chess and Hyperchess4 are given further below (the former in the Pieces' movements section, the latter in the Notes section). 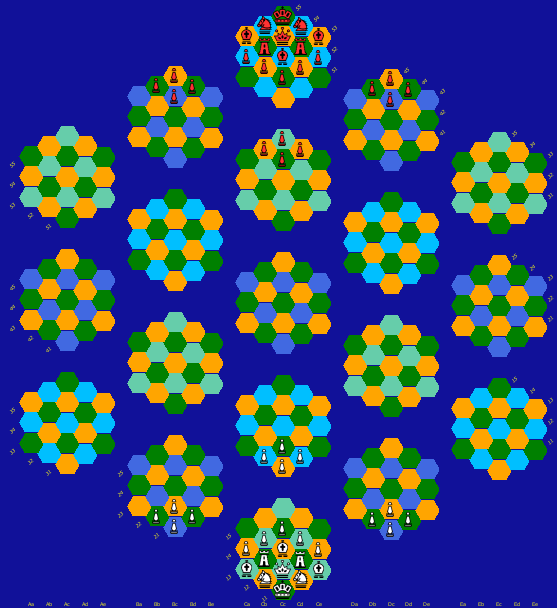 1) There are 6 piece types in 4D Hexagonal Chess, the same ones as for chess (or for Glinski's Hexagonal Chess), i.e. Pawn, Knight, Bishop, Rook, Queen and King.

2) All 6 piece types can move as in Glinski's Hexagonal Chess when making moves that stay on the same 2D hexagonal board in 4D Hexagonal Chess, except pawns cannot make an initial double step or en passant capture (pawn promotions to be discussed later), and bishops are allowed to take a single orthogonal step instead of moving diagonally (a bishop can eventually reach all 361 cells on an empty 4D board, as can be deduced shortly).

3) Except for knights and pawns, the pieces move between 2D boards by always going to the same 2D board cell (i.e. by rank & file) that they start on, but on a different 2D board. In doing so, these piece types move (orthogonally or diagonally) between 2D boards in the way they as a piece type would move on a single 2D board, i.e. so long as their path is not obstructed.

4) The preceding paragraph applies in 2D knight move (rather than orthogonal or diagonal move) fashion to some moves between 2D boards that a knight can make (in leaping, being a knight), i.e. when moving so that it arrives on the same 2D board cell on its destination 2D board as on its original 2D board.

4a) In addition, a knight can move to a new 2D board that is one board away orthogonally, with it landing on a 2D board cell that is two cells orthogonally away from the 2D board cell that it was on on its original 2D board, provided that the destination cell is not of the same basic colour as the knight began upon. As an aside, note that in the 4D Hexagonal Chess page's diagram for the setup position, blue is one of three basic colours for the 4D board hexes, in spite of there being 3 shades of blue used. The shades are there to help players visualize diagonal moves that go between 2D boards. If moving a piece diagonally (in that way, or else entirely upon a 2D board), note that a piece always stays on cells of the same basic colour and shade (imagine that the other two basic colours besides blue also have 3 shades each, which would have been excessive if actually shown in the setup diagram).

4c) Note that while a knight cannot reach the centre hex of a 2D board by moves made only on that 2D board, it can get to such a centre hex eventually on an empty 4D board by making moves that include going between 2D boards; thus a knight's tour of all 361 cells on the 4D board is possible.

5a) When moving between 2D boards without capturing something, a pawn moves one 2D board forward orthogonally, on the same column of 2D boards that it starts on, towards its promotion (note that individual columns are labelled A to E in the setup diagram). It then lands on the same 2D board cell as it starts on on its original 2D board, provided that cell on the destination 2D board is unoccupied.

5b) When moving between 2D boards by capturing something, a pawn can do so by going one board forward orthogonally (i.e. staying on its column, moving towards promotion), or it may capture something on an adjacent column by going one 2D board step 60 degrees forwards (either way). In case of capturing to a 2D board on the same column as it starts on, a pawn arrives on the destination 2D board forward one cell 60 degrees (either way) from the 2D board cell it was on on its original 2D board. In case of capturing to a destination 2D board on an adjacent column, a pawn arrives on the same 2D board cell as it was on on its original board.

5c) Note that the 4D Hexagonal Chess board is checkered in such a way that a pawn will never move to a cell of the same basic colour as that upon which it starts, a feature which also applies to the 2D board used in Glinski's Hexagonal Chess (when playing that game).

There is no castling. Stalemate is a draw.

When a player's last unit except for his king is captured, his king is "bared", and it is to be "confined" for the rest of the game in one of two ways, which the player with the now bared king must immediately choose from. This is indicated in the making of his very next move, by whether his bared king is moved on the same 2D board that it starts upon, or goes between 2D boards. That is, a bared king is to be confined to only making moves on the same 2D board, or else it is to be confined to making moves that go between 2D boards (i.e. it may only move to the same cell of any 2D board that it might move to). Note that the other side's king must not move into check, that is as though the opposing king were still unconfined in this respect. This confinement rule allows for more 'basic' checkmates to occur than may happen otherwise, while still allowing for cases of insufficient checkmating material at times.

I'd tentatively estimate the piece values for 4D Hexagonal Chess to be:

King (K) has a fighting value = 2 approx., though naturally it can't be traded.