This page is written by the game's inventor, James Spratt.

JETAN SARANG is a large chess-type variant of Edgar Rice Burrough's (ERB) original game of JETAN, invented in 1922 and published in his great science fiction novel CHESSMEN OF MARS.  Jetan Sarang is played on a 12 x 12-square board, using three rows of 12 pieces each.  The twenty-six different playing pieces contain the original eight pieces from Jetan and additional pieces representing other characters and creatures from Burroughs' series of eleven Martian books.  Some of the thirty-six pieces per side move in novel ways, in character with their identities in the exciting Martian tales, and the playing pieces are represented by pictorial icons designed to fit their descriptions. 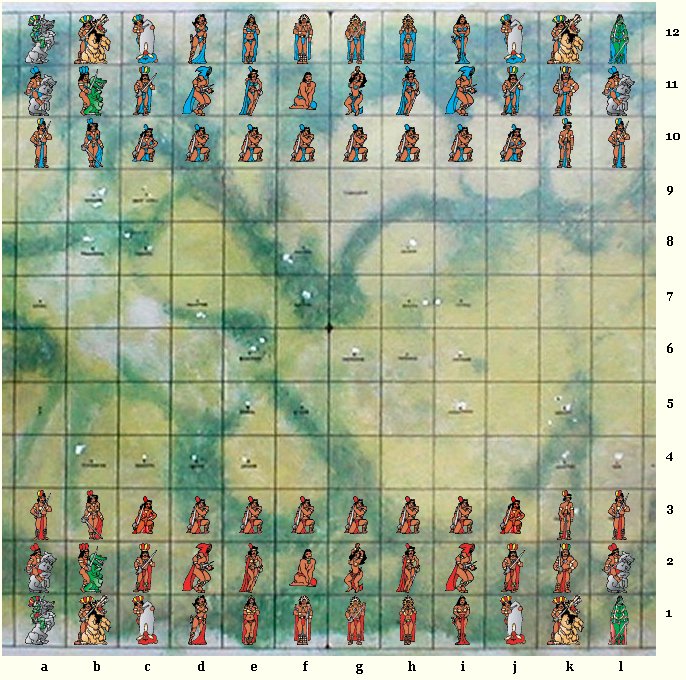 Pieces: The below list includes the names, move descriptions, letter designations for Game Courier, and graphics for each piece. This list is also a hierarchy for the purposes of promotion and squad moves.

TO WIN:     A.  Capture all enemy royal females--Jeddara, Jedda(s), and Princess Tara.

B.  Any Jeddara or Jedda to cross the board wins, upon reaching the 12th rank.

PROMOTION:  Any female to reach the opponent's back row may be replaced at that point with any lost piece, according to her promotion ability as listed in her piece description.  She returns to her original starting position on the board. If that position is occupied, behind it, or as close next to it as possible, but not in front of it.

SLAVES may only be captured by armed pieces of their own gender.

ASSASSINS do not capture unarmed opponents, or females, armed or not.

ESCORT:  Any female may be escorted by any armed companion of either gender, if she begins the move behind, beside or before the escorting piece. If the escorted piece is armed, she too may capture at the end of the move, and must land in the same position relative to the escort as at the beginning of the move.

SQUAD MOVE:  Military armed pieces (in descending order:  Jeddak, Jed, Thark Tars Tarkas, Jedwar, Odwar, Teedwar, Calot Dwar, Dwar, Thoat, Padwar, Than, Tha, Panthan and Pantha) may institute a Squad, or group movement, wherein it may take along with it up to three other lower-ranking pieces than itself, from within 4 adjacent squares, in one of which it sits.  All pieces must move as the highest-ranking piece moves, and must land in the same relative position to the leader.  They may make concurrent captures of opponent pieces upon landing on enemy-occupied squares.

IMMOBILIZATION: Immobilization by the charming, unarmed females does NOT include the following pieces:

RAPID DEPLOYMENT:  Any unbroken rank may advance one rank forward as a normal turn, whether it is in its original configuration of pieces or not.  If any particular piece in the rank is blocked from forward movement, the rank still moves, leaving the blocked piece(s) behind.

THE CHARGE: When a player has no fewer than six of his men within one move of direct threat position, he may call a "Charge", wherein he may move one of his pieces from each of his twelve rows.

Sample Game: Click on the below link to see a game of Jetan Sarang being played in Game Courier.

See this link to ERBzine's article on James Spratt and the creation of Jetan Sarang.

See this link to ERBzine's article on James Spratt and his sculptures.

Note that we have no connection to, or bear responsibility for the linked sites.
﻿