This game is the witness of a strong attachment to what others might consider as meaningless eccentricities. I discovered Timur's or Tamerlane's Chess in 1978 with Pierre Berloquin's book (in French) and understood that the chess game I knew was not as ancient that I thought and that alternative forms were possible. A this time, I built up my first Tamerlane's chess set and board and I soon adapted more modern moves for its pieces. Progressing with many trials, I had to modify some of them, especially to create those of the Ship, Elephant and Guards.

In 1997 I found successively D.B.Pritchard's reference book and the formidable Hans Bodlaender's Internet site. I then realize not be the only one to be attracted by this large chess. Among my predecessor there is Eric Greenwood, inventor of Renniassance Chess which is in a sense, Tamerlane II competitor.

Eric has chosen a violent facing between pieces with very strong offensive powers. This is a respectable option which led to an original and captivating game. Tamerlane II is on a more quiet approach. The piece number increase is compensated by reasonable and limited moves. This game also tries to keep the magic of this thousand and one nights chess.

After trying the 11 x 10, then the classical 10 x10, I finally adopted the less common 11 x 11. The 11 files respect the original configuration of Tamerlane's chess with a central king. The 11 ranks give more space to the game allowing to arrange the piece before struggling. Moreover, they place Bishops and Camels on same colors allowing attack of opposite counterparts and mutual protection.

The General and the Governor are the King's Guards. Both pieces and the Camel are taken from Tamerlane's Chess.

The Cannon is taken from Xiang-Qi. This piece and the Elephant can also be found in Shako.

The Ship is an original man inspired by the Giraffe from Tamerlane's chess and the Gryphon from "Grande Ajedrez".

The Ship has less liberty than the "Cavalier" from Renniassance and is more limited than the Gryphon from Grande Ajedrez which can move horizontally. Nevertheless its move power is comparable to the Rook and the Bishop.

There is no Queen at the start of the game. This piece may appear later on by promotion.

Victory is obtained when the opposite King is checkmated with no possibility to be replaced.

All other types of endgame (pat, perpetual check,...) are classic.

I miss an extensive practice of these rules. Then, it might happen that with a more frequent use some critics will appear. Nothing will make me happier. Here are two modifications, firstly rejected, but which will merit maybe one day to be reconsidered. They give more liberty to the pieces:

Shako, another game of my invention, has been derived from Tamerlane II, approximately around 1990.

Mail me at: (email removed contact us for address) ssvariants.com

Below, you find a photo made by Jean-Luc Muraro of the set of this game, designed and made by Jean-Louis Cazaux. If you click on the picture, you can see it in large size. 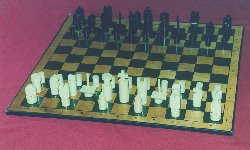 Tamerlane II is a submission in the contest to design a large chess variant. You can download a set of bitmaps of the pieces that are used in Tamerlane II. Zipfile; designed by Jean-Louis Cazaux. You also download a zrf file to play Tamerlane II providing you own Zillions-of-Games software.

With the submission of this game to the contest, Jean-Louis Cazaux added the following comments:

Tamerlane 2 is a genuine Large Chess Variant with a large board, a large number of different pieces and the typical flavor due to several unique rules like color conversion for bounded pieces, promotion for other than pawns or king replacement. To my opinion, the major trap of such a Large Chess, having too many powerful pieces which turns the game into a boring massacre, as been avoided by rejecting the inclusion of Queen or equivalently ranked piece on the initial setup. Well, this is just an opinion...