One of my earliest pages featured a family of variants collectively called ECUMENICAL CHESS. It was an extension of Wildebeest Chess to include not only the compound of Knight and Camel but also the compounds of each of those pieces with Bishop and with Rook.

There are twice as many non-Pawns as in FIDE Chess, and in the simplest forms this was reflected in using 2 ranks of a board with 8 files by either 8 or 10 ranks, depending on whether there is a Pawn rank or not. Both preserve the FIDE pattern of four ranks between the camps. An alternative is to use two complete FIDE boards, with Pawn and non-Pawn ranks on both, joined either side by side as in Ralph Betza's Doublewide Chess or back to back as in Köksal Karakus' Besiege Chess. Either might be done twice over to create a wraparound, as in Köksal Karakus' Torus Chess. 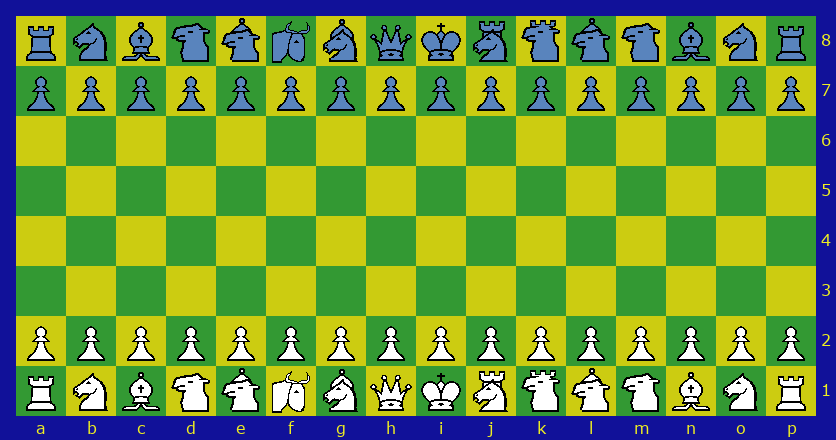 This variant preserves the FIDE Pattern of compound pieces in the middle and simple piecs in the usual order on the outer files. It is named for the North European tendency to increase files more than ranks, as in Courier, Duke of Rutland's Chess, and my variants of both. 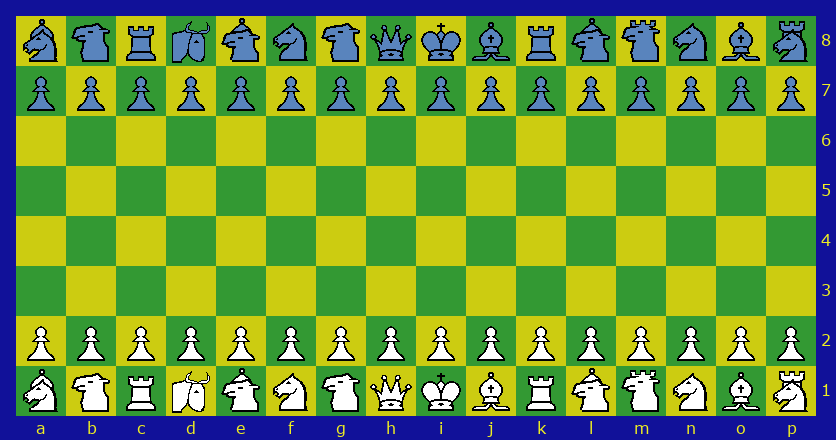 This variant distributes compound pieces in four pairs throughout the first rank as all files are, in a sense, middle files. Note that Rooks are put far apart, as would not be the case were the Rook files from Northern EC simply joined together. 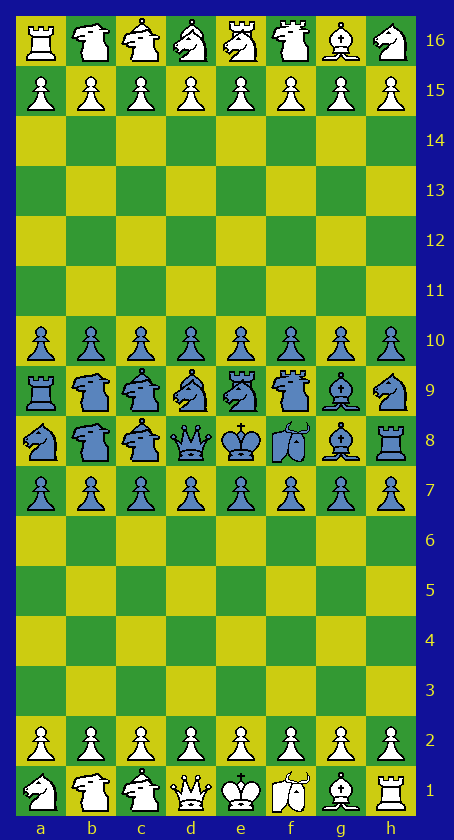 In SINGLE BESIEGE EC the board is as shown and each player has disadvantages - White's divided army and Black being attacked on two fronts, as in Besiege Chess.

In DOUBLE BESIEGE EC the board is wrapped round at the end ranks, so that both armies are united and both attacked on two fronts, as in Torus Chess. 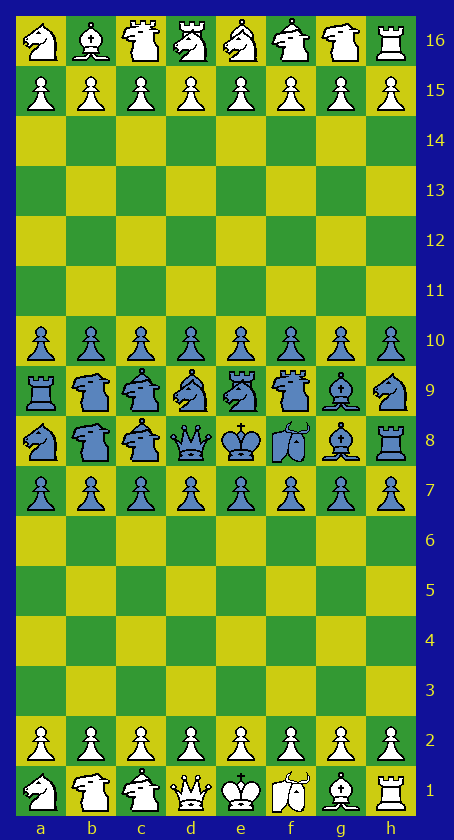 As Double Besiege EC, but the ends are wrapped round the wrong way round. This means that each file joins up not to its own other end but to that of the "opposite" file. This unbinds Bishops, Camels, and Caliphs as well as allowing Rook and Bishop moves twice as long as in Double Besiege EC.

I have also created an Ecumenical form of Quadruple Besiege Chess.

The PAWN, ROOK, KNIGHT, BISHOP, QUEEN, and KING are the same as in FIDE Chess, extrapolated as the board permits, and except for Pawns are in the same numbers. Long-range moves are restricted to 15 steps in most cases, to prevent null moves. In Moebius EC they are restricted to 31 steps, and Bishop moves in Quadruple Besiege EC are restricted to 7 steps.

Pawn double-step moves and En Passant are as in FIDE Chess, except in Quadruple Besiege EC which has neither. Pawns move towards the nearest enemy rank and on leaving that rank are promoted to any other capturable array piece. In Quadruple Besiege EC a Pawn on an enemy long diagonal may make a noncapturing move on either "forward" orthogonal but capture only along it.

None of the Besiege EC variants refer to the Besieger piece of my 3d Shogi variant Tunnelshogi, which is a Unicorn promoted by adding the Wazir move, and therefore does not occur in any 2d variant.

Pieces can be represented by two distinguishable FIDE sets. Unlike other forms of Ecumenical Chess, these subvariants require both lots of Pawns to represent Pawns themselves (or one lot Pawns and one lot Yeomen). The rule of large K/Q and small B/N/R as themselves, small K/Q as Cardinal/Marshal, and large R/B for Canvasser/Caliph may be retained, but the Gnu should be represented by an unturned large Rook to free the large Knights for representing Camels.