It is a chess variant that mixes Marshal and Cardinal of Embassy chess, and Crazyhouse rules. However, I adjusted the position of the piece and the size of the board so that it feels close to the FIDE chess, and some of the rules of Crazyhouse were refined. 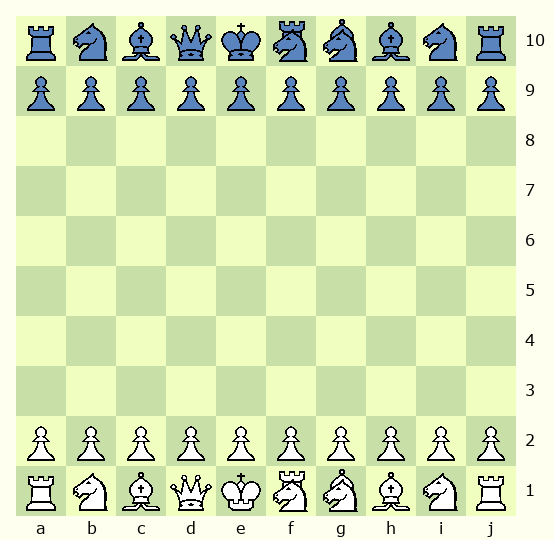 Rook, Bishop, and Knight have additional King's move when promoted. Marshal and Cardinal become the same as Queen when promoted. King and Queen are pieces that are not promoted.

Jade/King (J. Ok玉/Wang王) : Moves one square orthogonally or diagonally. White player has Jade, and Black player has King. When called without distinction between Jade and King, it is simply called King. (therefore, in notation, Jade and King are written as same K.)

- The state in which your King is attacked by enemy piece is called check. if your King has no way to get out of the enemy's check, call it checkmate and you are defeated.

Knight (N. Gi騎) : Moves one square orthogonally and then one square further diagonally. It can pass pieces. Promotes to Scepter.

Scepter (S. Gyu圭) : Moves like a Knight or a King.

Marshal (M. Su帥) : Moves like a Rook or a Knight. Promotes to Apricot.

Cardinal (C. Ye猊) : Moves like a Bishop or a Knight. Promotes to Whole.

1. Castling is possible if Jade and Rook are at the starting point and there is no piece between them.

3. However while Jade is being attacked, castling is not possible, and if at least one of the 3 spaces Jade moves is exposed to an opponent's attack, you cannot cast in that direction.

2. When a promoted piece is captured, its promotion disappears.

3. A piece that has been promoted cannot be returned to before promotion.

- A piece that has not been promoted when it leaves the enemy's last rank can only be promoted or not until it reaches the last rank again.

2. The piece cannot be promoted as soon as it is dropped to the last rank. A dropped piece needs to move after it is dropped if it wants to promote.

3. Pawns cannot be dropped on the first(1st) rank and last(10th) rank.

5. Even if a Rook or Jade moves or drops, castling is possible as long as they are in the correct position(=starting point). Likewise, even if the Pawn is dropped or moved, it can move up to 3 squares on the second rank, 2 squares on the third rank.

- Since castling is only possible at the starting point, King must be on the e-file. (King on f-file cannot be castling)

If a player can no longer move or drop pieces, it becomes a draw as a stalemate.

- If a draw is made due to threefold repetition or stalemate, the match is played again by swapping White and Black.