This page is written by the game's inventor, Jonathan Rutherford.

The majority of chess variants play in two dimensions, and several of them are quite entertaining.  Adding a third dimension has become quite popular, resulting in a plethora of enjoyable 3D chess games.  There are even a few variants with four or more dimensions, some of them very clever (i.e. “Timeline”).  But ironically, creating a playable and enjoyable one-dimensional game of chess is perhaps a more serious challenge.

Ito Shogi, or “String Shogi,” is a one-dimensional chess variant. My first interest in one-dimensional chess variants began when I ran across the One Dimensional Chess Variants page here.  I tested these variants out, but most of these suffer from a handful of fatal flaws.  For instance, unless one plays very poorly, material trade-offs tend to be largely equal, and the game ends in a King vs. King draw, or one side winds up with a single piece advantage that wins the game.  Some game inventors were clever enough to complicate the game sufficiently to avoid such a game of attrition.  Sadly, most of these still result in drawish positions, where the first player to show any real aggression suffers material loss, permanently crippling his/her game.  The strategy that players quickly learn is to just sit back, and wait for the opponent to make a mistake.  Though all of these variants are certainly intriguing, most are not fully analyzable or playable, at least in the long-term.  I attempted designing my own one-dimensional chess variants, but continued to face the same challenges as previous designers.

As I reflected upon what it would take to make a truly great game, I had an epiphany: shogi is the solution!

Shogi variants are remarkably versatile, forming the largest chess games I know (“Tai Shogi,” “Taikyoku Shogi”) as well as the smallest (“Micro-Shogi”, “Nana Shogi”).  By virtue of its immortal pieces and the capacity to promote nearly every piece, it lends itself to miniaturization far better than any other chess game I know of.  Shogi and its many variants offer so many preexisting pieces to choose from, it was unnecessary for me to invent any pieces of my own.  I simply had to adapt the moves of those already in existence for one-dimensional play.  Shogi armies do not suffer from attrition; shogi games get more complex as they play out; shogi pieces can be dropped in the midst of the enemy army rather than waiting for the army to shrink; shogi pieces are generally weaker than chess pieces, meaning that adaptations of their pieces to a single-dimensional game could allow for interesting interplay among the armies; most shogi pieces promote, allowing for pieces' moves to change, thus complicating decision-making.  Yes, if I were to create a truly complex one-dimensional game, a shogi game would work best!

I originally invented Rutherford’s 1-Dimensional Shogi in 2002, but I had not really thought through my principles of development or playtested it with anyone.  In 2007, I applied very specific principles to making a better game, redesigning it in an attempt to simplify the rules of the former game, yet complicate the tactics and strategies involved.  I named this new game Ito Shogi, but still had only tested the game alone.  After Malcolm Webb designed a Zillions file for the game, testing the game against itself made me realize that there were remaining design flaws.  However, I eventually met a shogi enthusiast friend named Andrew Sheedy, and together, he and I redesigned the game substantially, resulting in the updated 2022 rules.

The Ito Shogi board consists of 31 squares in a single file.  Like all Shogi variants, its squares are uncheckered.  However, because some of the moves are difficult to visualize without the checkered pattern, every other square has “notches” in its corners.  The picture to the left shows the trays where players keep their pieces “in hand,” but such is not necessary, if players feel that it detracts from the game’s claim to having only one dimension.

Each piece comes from another Shogi game.  I converted each pieces move into a one-dimensional move by adopting the following strategy:

There are quite a few pieces considering the limited playing field.  The starting pieces and their promoted values are grouped together:

Silver Cannon - As many squares as desired in a forward or backward direction, as long as exactly one piece (of either side) is jumped.  There may be any number of vacant squares on either side of the jumped piece.  The piece that facilitates jumping is not captured, only the piece that is “landed upon” (see diagram for clarity). [from Cannon Shogi]

Reverse Chariot (promoted Silver Cannon) - As many unobstructed squares as desired in a forward or backward direction. [from Chu Shogi]

Goose - Jump to the 4th square forward or jump to the 2nd square backward. [from Tori Shogi]

Flying Swallow  - Jumping each 1st, 3rd, etc. squares, landing on the 2nd, 4th, etc. squares.  As many unobstructed squares in this fashion as desired in a forward direction, or step 1 square backward (see diagram for clarity). [from Taikyoku Shogi]

Bishop (promoted Flying Swallow)-Jumping each 1st, 3rd, etc. squares, landing on the 2nd, 4th, etc. squares.  As many unobstructed squares in this fashion as desired in a forward or backward direction (see diagram for clarity). [from Shogi]

King -The royal piece, which must be protected at all times.  1 square forward or jumping to the 2nd square forward or 1 square backward.  Note that this is the only piece whose move does not correspond exactly to its two-dimensional equivalent.  This allows for a weakened position, a sort of compensation for the King’s otherwise inherently strong defensive position. [from Shogi] 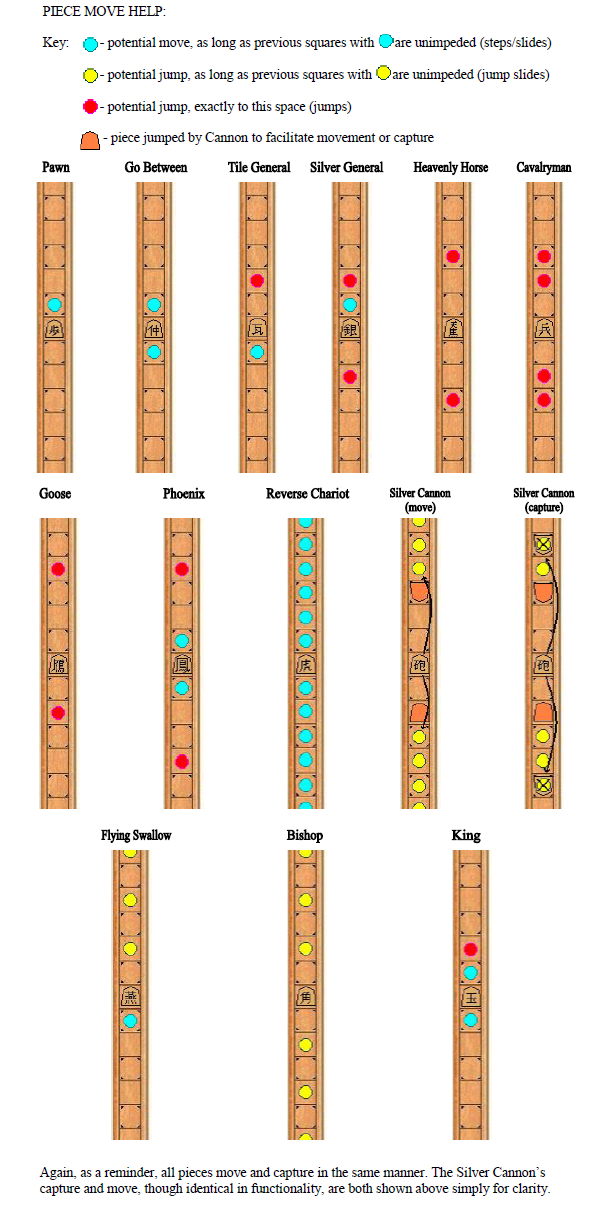 As in Shogi, the object of Ito Shogi is to checkmate the King.  Stalemates are illegal.

Captured pieces become the property of the captor, and as such may be re-entered on to any vacant square as that player’s turn with the only restriction being that it must be dropped at its unpromoted value.  Unlike classic shogi, a piece may be dropped or moved onto a square from which it may not make any further moves.

Promotions are as in Micro-Shogi: every time a piece makes a capture, it automatically is flipped so that the opposite face is showing, and the piece assumes the properties of that face.  Upon making another capture, the piece is again flipped.  This promotion/demotion may take place any number of times throughout the game.  Only the King is never flipped.

As in Shogi, there is a prohibition against repetition of moves: If players create a previous position for the third time (including pieces in hand and the same player to move), the move must be retracted and a new one played.

Many thanks go to:

Larry L. Smith, who gave me the idea for “notched corners,” preserving the Oriental feel of the game, while allowing easier visualization of many of the moves.  Also for his suggestions in the past and his extensive help with Rutherford’s 1-dimensional Shogi, this game’s predecessor.

Steve Evans, for reviewing my rules and helping me clarify them, as well as identifying this game’s strong points and giving encouragement.  Also, if he had not created his Shogi software, I may have never fallen in love with Japanese chess, and therefore would have never created this game in the first place.

R. Wayne Schmittberger, for finding strategic flaws with Rutherford’s 1-dimensional Shogi, which I have tried to remedy in Ito Shogi.

Malcolm Webb, for programming the Zillions file, which exposed flaws in earlier design, and his patience as I meticulously made alterations to the rules.

Andrew Sheedy, who playtested the game with me, offered many suggestions, and might very well deserve being called a co-creator of this final 2022 version.