This variant combines two ideas that had been in my mind. One was finding a use for the more complex pieces in what is now Man and Beast 11: Long-nosed Generals. Another was making better use of the longer range of the Camel and its forward-only (FO) version the Hump highlighted in comments on Mitregi.

It then struck me that as a board gets bigger generals get weaker and might usefully be replaced by pieces mixing one- and two-step moves depending on direction. Enhanced Pig/Raj pieces have that property, and on a 2d board always have all forward moves in one range and at least one backward move. There are eight types, two colourbound and one bound to half the files, so allowing 2 of those to cover all cells, plus the King, gives 5+(2x3)+1=12 central pieces. I also fill "Pawn ranks" with pieces that can move one or two steps forward, in accordance with the giant board.

There are two subvariants, Leaping and Stepping, depending on whether the central and Pawn-rank pieces can leap over the halfway piece when moving two cells. Comments suggest that Leaping is much to be preferred! 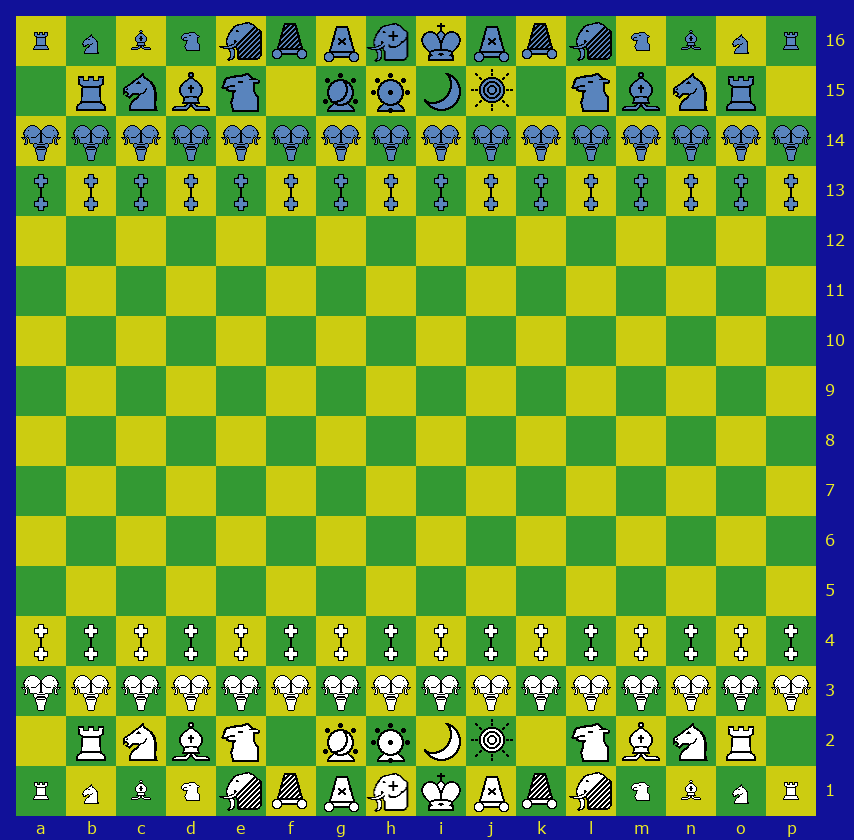 Original Mitregi pieces: Enhanced Pigs, described in terms of which Wazir/Ferz/Dabbaba/Elephant moves they have and explained more fully in my article Man and Beast 11: Long-Nosed Generals:

In the above diagram, the White pieces can capture the Black Knights 1 or 2 cells away but not move to any empty cell. Enhanced Raj pieces, described in terms of which Wazir/Ferz/Dabbaba/Elephant moves they have and explained more fully in my article Man and Beast 11: Long-Nosed Generals: Front Ranks: Promotees:

Castling and En Passant are not used in this game.

Promotion is allowed on entering, moving within, or leaving the four ranks of the enemy camp. A piece with no further move in unpromoted form must be promoted. Captured pieces may be reintroduced in the capturing army in unpromoted form, on any rank where promotion would not be automatic.