As my number of Dual Direction Variants has grown I have decided to split the page into two, based on how the pieces are combined. The original page deals with those where each radial piece is combined with its own dual. This new page deals with those where they are combined with a piece moving differently in the dual direction. Knights have the Camel move added to give a Gnu in both cases. This is useful for adding moves not included for any piece to variants with both of two duals. 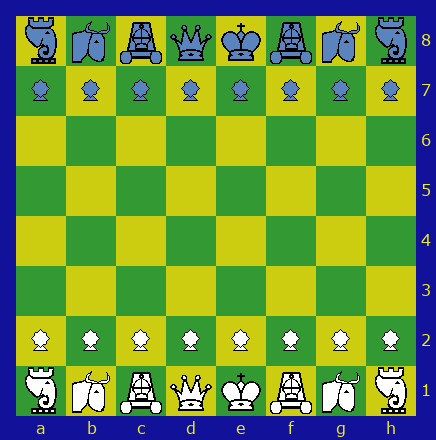 Ashtaranga means eightfold army, and in the context of this variant piece types represent two regiments each - infantry and yeomanry (Princeling), chariots and elephants (Infanta), cavalry and camelry (Gnu), and war engines and couriers (Inquisitor). This variant is derived from adding moves to the FIDE pieces, except for the Queen which already has both orthogonal and diagonal moves. This array can also be used for INQUISHOGI, applying similar rules to Bishogi. 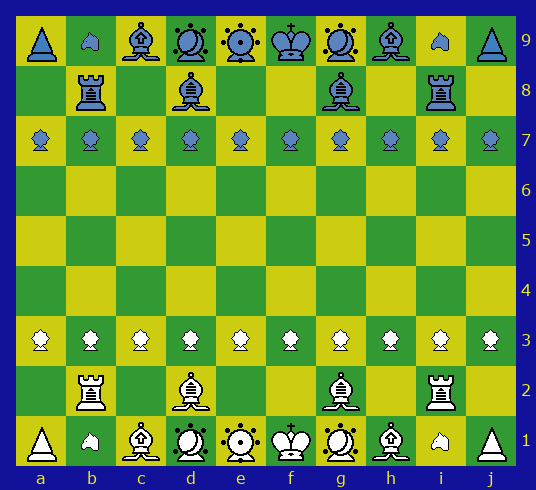 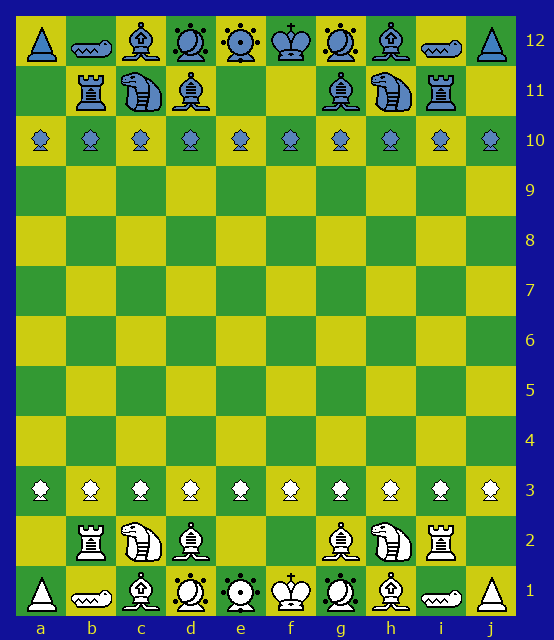 This is a crossover form of Mitregi. To make things more interesting I combine one symmetric component with one forward-only one in keeping with the generals. 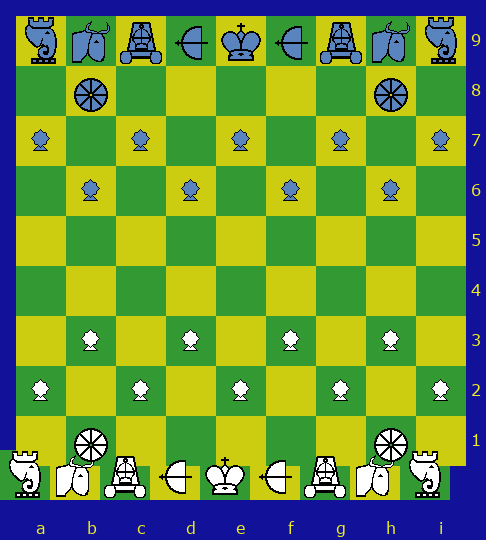 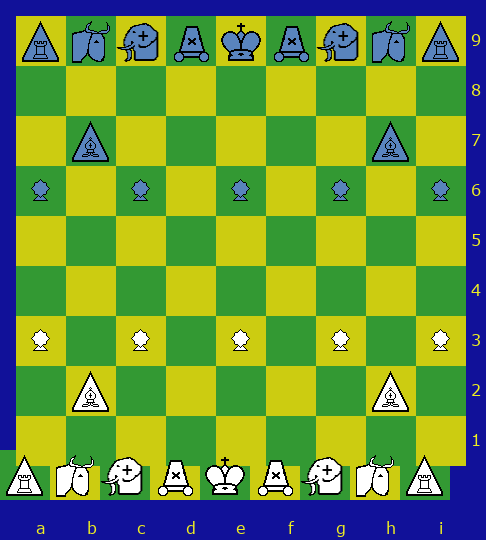 In Inquisition Ashtaranga Princelings are promoted to any capturable array piece, and in Inquisitor Qi to any captured piece, on reaching the far rank. In Inquishogi any piece except a King or Queen may be promoted to a Queen on starting or ending a move within the enemy camp. Beakgi has optional promotion following a move starting or ending in the enemy camp as follows: Princeling, Handyman, Goldgeneral, and Silvergeneral to Prince; Goldfaculty and Silverfaculty to Queen-Rook Secundigrade (Rook+Ferz+Elephant); Silverbeak and Goldbeak to Queen-Bishop Secundigrade (Bishop+Wazir+Dabbaba); Nitan and Caman to Gnu. Secundigrades are fully described in Man and Beast 11: Long-nosed Generals.
Castling and Double-step Moves

In Inquisition Ashtaranga an unmoved King may Castle with an unmoved Infanta, with usual FIDE restrictions on check. Other variants have no Castling. Princelings have no double-step initial move, as they are already considerably stronger than Pawns, and so no En Passant.
Oriental Rules

In Inquishogi and Beakgi, as in Shogi, pieces can be reintroduced, always unpromoted and on a cell whence they have an unpromoted move.
In Inquisitor Qi, Infantas cannot cross the River diagonally, nor Inquisitors orthogonally. Chatehoppers cannot enter or leave Fortresses diagonally, nor Primahoppers orthogonally. These are River restrictions on components added relative to the riverless Yang Qi. Inquisitor Qi also has the Yang Qi King Swap.
Hoo Qi pieces can cross the River orthogonally or Knightwise but not diagonally or Camelwise. Its King can enter and leave both Fortresses diagonally but not orthogonally while Princes, Waffles, and Fezbabas can do so orthogonally but not diagonally. Both rules are consistent with existing XQ moves, given that XQ Generals can never actually reach the River! Kings may not face each other along any file, rank, or diagonal without an intervening piece.
Winning

In all these variants the goal is to checkmate the enemy King. Stalemate is a draw.