This page is written by the game's inventor, Kevin Pacey. 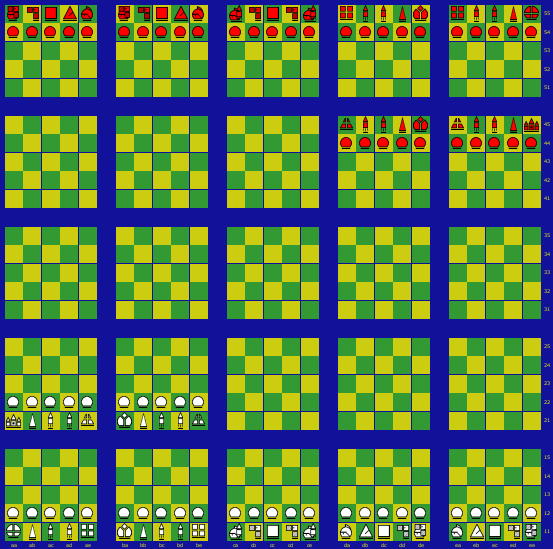 In 5*4DChess some 3D & 4D moving pieces are introduced, & all the pieces may possibly move between the mini-boards when performing a move (note that 'coordinate' in these instructions refers to the rank or file of a square on a mini-board, or refers to the row or column of a mini-board). Note a total of 14 piece types are used, 13 borrowed from my earlier 4*Chess & Super4*Chess 4D chess variants:

D=4*Chess Balloon (I'd nickname it Dirigible) - moves like a bishop except changes 4 coordinates as it moves & stays on same square colour (standard 4D fairy chess piece);

B=4*Chess Bishop - changes 2 coordinates as it moves, like a bishop (stays on same square colour);

R=4*Chess Rook - changes 1 coordinate as it moves, like a rook;

M=Super4*Chess Missionary (based on a piece from Shogi [promoted Bishop, or 'Horse', in that game]) - can move like a 4*Chess B or a 4*Chess K;

P=5*4DChess Pawn (a unit specific to this game that moves differently than a 4*Chess P) - moves like a 4*Chess R (unless capturing), but generally moves forward by only 1 square at a time on a rank, or forward by 1 row to another mini-board (but moves to same rank & file there). It may make an initial double step like a 4*Chess R moving forward two squares (i.e. not jumping over anything on a R move's path), that is either by rank, or by moving to another mini-board two rows forward on the same column (landing on same rank & file there). If it is making a capture it can do so like a 4*Chess B that moves 1 rank forward on the same mini-board, or it can do so like a 4*Chess B that moves to a mini-board that's adjacent to (but not behind) it, i.e. it must always advance by rank or row, & never retreat by rank or row. Capturing a 5*4DChess P that has taken a double step by en passant capture is allowed, with the side doing the capturing placing his pawn making such a capture on the square the enemy pawn would have gone to if it had taken only a single step in the same direction that it took the double step on the previous turn. 5*4DChess P promotions occur on the last rank of any mini-board that's on the same row where the enemy K starts the game, & a 5*4D*Chess Pawn may promote to any 4*Chess or Super4*Chess piece type above (other than 4*Chess K). It is possible for a 5*4DChess P to early on avoid being captured by an enemy 5*4DChess P simply by moving to the last rank of a mini-board.

An implication of the above is that the following pieces have certain max. number of directions that they can move along in making a move: 4*Chess R: 8 directions max. (including the 4 if it stays on the same mini-board as it starts) 4*Chess D: 16 directions max. 4*Chess B: 24 directions max. (including the 4 if it stays on the same mini-board as it starts) 4*Chess U: 32 directions max. 4*Chess Q (or 4*Chess K): 80 directions max. (the sum of the above pieces' max. directions) 4*Chess N: 8 plus 8 plus 4x4 plus 4x4 = 48 directions max. (can be true in 5*4DChess) If a game were to be recorded, all 4 coordinates (Column, then file, Row & rank) are given for where a 5*4DChess piece or 4*Chess P starts & finishes its move. If a 5*4DChess P promotes, this is recorded by tacking on the letter of the piece type selected after the promotion square's 4 coordinates. Similarly, a capture, check or mate can be indicated as in standard chess notation. Beyond easily checkmating a lone 4*Chess K with just a 4*Chess Q, I've imagined checkmates of a lone 4*Chess K with other 4*Chess pieces (excluding 5*4DChess Ps or pieces specific just to Super4*Chess), though these might not be even close to being generally forcible 'basic' mates if the starting point is not totally favourable (i.e. beyond mate in 1 move being available). Notwithstanding that, I conceived of possible mates in 1 move using any 4 such other 4*Chess pieces, but with at least 2 of them not being 4*Chess Ds. I'd guess the relative values of 5*4DChess pieces to be about as follows: 5*4DChess P = 1 4*Chess D (for within 5*4DChess, this piece for example could be called a 5*4DChess D instead, if one prefers) = 1.2 4*Chess R = 3 4*Chess B = 3.4 4*Chess U = 3.4 5*4DChess N = 3.6 (stronger than a 4*Chess N on its 4x4x4x4 board) Note that on a 5x5x5x5 board, individual Bs and (especially) Ds can't always reach the same number of cells on an empty board as other individuals of the same piece type, so some Bs & Ds are worth, at the least, very slightly more than other Bs & Ds, respectively, on such a board. Just as a chess Q = R+B+P in value, 4*Chess Q tentatively = ((4*Chess R + 4*Chess B + 4*Chess P) + 4*Chess D + 4*Chess P) + 4*Chess U + 4*Chess P = 14, but actually I penalized a 4*Chess D by two pawns worth for its additional forms of binding, so I think the value of a 4*Chess Q = 14 + 2 = 16. A chess K has a fighting value of 4 (even though it cannot be exchanged); this value in my view might be rather oddly expressed (for lack of a known formula) as chess K = 32 x (max. # cells chess K moves to [eight]) divided by (# of cells on a chess board [sixty-four]) = 4, and similarly, the fighting value of a 5*4DChess K = 32 x (max. # cells 4*Chess K moves to [eighty]) divided by (# of cells in 4*Chess [six hundred and twenty-five]) = 4 approx. I'd say a 5*4DChess X = 4 roughly (since it moves like a K as well). Here are my estimates for the remaining pieces: 5*4DChess S = 6.6; 5*4DChess T = 6.8; 5*4DChess M = 7; 5*4DChess H = 7; 5*5DChess J = 8.6 (just as Q=R+B+P in value, J=N+K+P in value). How would I try to assess the strengths & weaknesses of this 4D variant? In attempting to invent a number of 4D variants, I came up with 9 equally weighted (sometimes slightly conflicting) criteria, to try to compare these variant ideas with each other: 1. Low total number of piece types (the game is perhaps barely OK on this); 2. Low total number of pieces in the setup (barely adequate perhaps); 3. The pieces (other than pawns) are "natural" or "pure" to 4D Chess (no, not the Mann-like ones); 4. Good rules (& setup) for pawns (I'm not sure I'm satisfied having the initial double-step & en passant rules, but there's no ideal solution); 5. Some chance of early mate or relatively short game (scores adequately); 6. Variety of viable exchanges of differing piece combinations (excellent); 7. Variety of "major" and "minor" pieces (excellent); 8. K can legally attack opposing pieces/pawns (excellent, noting K not as powerful on 5x5x5x5 board); 9. Pieces (especially N-like) may obtain great scope (excellent due to 5x5x5x5 board); Fwiw, in scoring 5*4DChess with these 9 criteria, giving a score of 0-4 for each, I found it had a total score of 22/36 (or a little over 61%), just slightly greater than for my earlier 4D variants, 4*Chess and Super4*Chess. I'd note though that IMHO either of these scores slightly better than 5*4DChess if a score of 0-2 for each criteria is used instead. Also IMHO, the game's best attraction may be that it nicely meets criteria #6-9. Here are links to my Chess Federation of Canada website blog entries discussing 4*Chess & Super4*Chess: http://www.chesscanada.info/forum/entry.php?31-Updated-version-4-0-of-4*Chess-(four-dimensional-chess) http://www.chesscanada.info/forum/entry.php?100-Super4*Chess-(four-dimensional-chess) Here's a similar link to 4D crazyhouse/bughouse variants based on 4*Chess (similar variants could be made arising from 5*4DChess instead): http://www.chesscanada.info/forum/entry.php?86-Updated-version-2-0-of-four-dimensional-crazyhouse-bughouse-chess-variants Here's a link to 4*Chess as given on chessvariants.com: http://www.chessvariants.com/index/msdisplay.php?itemid=MS4chessfourdime Here's a link to Super4*Chess as given on chessvariants.com: http://www.chessvariants.com/index/msdisplay.php?itemid=MSsuper4chessfou A similar link to another 5x5x5x5 variant of mine (one which uses 74 pieces): http://www.chessvariants.com/index/msdisplay.php?itemid=MSopenking54dche