Here's an experimental 8x8x2x2 4D board variant idea of mine that was inspired by Alice Chess, Directed Alice Chess III and by my desire for there to be a completely viable 4D variant that is somewhat similar to standard (2D) chess.

A Game Courier preset for play is available. Note that links concerning Alice Chess and Directed Alice Chess III are given in the Notes section further below. 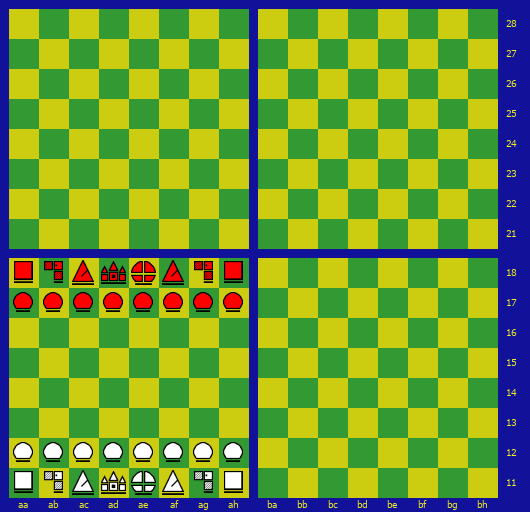 All 6 piece types that are used for standard chess are also used exclusively in playing 4D Quasi-Alice Chess.

4D Quasi-Alice Chess is played using four 2D boards, three of which are empty at the start of the game. All pieces move on these four 2D boards as in standard chess. However, in turn each player makes a single move on any of the four 2D boards according to the five rules that follow, which are somewhat similar to those of Alice Chess:

3) After moving, if the piece is not a king, it is transferred to a vacant corresponding square of that player's choice (if any available), on one of the other 2D boards, according to the restrictions stated by the previous rule. However, if the piece is a king, it may (in addition to transferring to a vacant corresponding square, according to the restrictions of the previous rule) possibly capture an enemy piece on the chosen corresponding square in the process of completing its move (though see next rule, concerning castling). Thus a double capture by a king in a single move is legally possible.

5) A pawn may capture by en passant any enemy pawn that lands beside it (on the same 2D board) after making an initial double step move - so long as the corresponding square on another 2D board that the capturing pawn can be chosen to transfer to is a square that is also empty.