Chess Variant Kits from the House of Staunton

I recently ordered two apiece of each of the Chess variant kits being provided by the House of Staunton in association with Musketeer Chess. There are now five kits, and you can order them through these House of Staunton affiliate links:

This picture shows Chancellors on the left and Archbishops on the right. The Archbishops are shown at different angles.

This picture shows white Chancellor and Archbishop pieces alongside the original pieces produced for Gothic Chess. The Chancellor design has changed quite a bit, but the Archbishop design hasn't changed as much.

Here is a closeup of both black and white Chancellors from both the Camaratta kit and Gothic Chess.

Here's a closeup of Archbishops from both sets, showing the Archbishop pieces at different angles.

Here is a closeup of the elephants, showing both front and side.

Here is a closeup showing the back view and the other side view.

The Leopards are shown with a Knight and a Bishop for scale. They are bigger than the Knight but shorter than the Bishop.

The Cannons are surrounded by some other pieces for scale. You can see that they are taller than a Bishop but shorter than a Queen. Besides some usual Chess pieces, which are colored natural and black, they are flanked by Cannons from Cambaluc Chinese Chess, which are colored cream and black. These two together could be used for Cannons and Vaos in games that have both, such as Eurasian Chess.

Here's an elevated view, showing the holes in the Cannons.

Here's a picture John Davis provided comparing the Musketeer Chess Cannon with the Cannon from ElephantChess Chinese Chess, which you can buy through the Amazon affiliate link below:

The Hawks are shown with some other pieces to show scale. These include regular tournament size Chess pieces colored black and natural and a black Archbishop from the Camaratta Chess kit.

The Fortresses have removable tops, which also makes them useful for short rooks.

The Unicorns look like horned Knights, which is suitable. 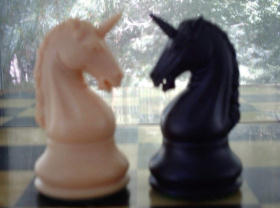 I have no idea why these are called Spiders. They do not look anything like spiders. They look like maybe an oriental variation on a Rook.

Before they came out, I was really hoping the Dragon pieces would look like dragons. These look more like knights with armored face masks. The piece is described as moving like an Amazon, and I suppose these pieces may be suitable for that piece.

The pieces are colored natural and black, and they are designed for pieces with a King whose height ranges from 3.75 inches to 4 inches. The Musketeer Chess website says that these pieces will match either the Marshall series or the Collector series. The Collector series follows the original Staunton designs, and the Marshall series is a Staunton variant. The Collector series linked here has a 4 inch King, but it appears that you can order each of the kits with a set of Collector pieces with a 3.75 inch King. At least that's what it says on the images. The text calls them "HOS Luxury pieces."

A less expensive alternative would be their Triple Weighted Regulation Plastic Chessmen with a 3.75 inch King in the natural and black coloring. Even less expensive alternatives include their Single Weighted Regulation Plastic Chess Pieces - 3.75 inch King and their Competition Series Plastic Chess Pieces - 3.75 inch King. I went with the option that was for me the very cheapest. Since I already owned two sets of black and ivory single-weight regulation plastic Chess pieces, I ordered two sets of Regulation Colored Plastic Chessmen in the natural color. I was disappointed that the coloring of these natural pieces was not an exact match with the coloring of the white pieces in these kits. Still, when I compared them with pieces from other sets, they were a closer match.

Here are some photographs showing how the coloring of the white pieces in the kits compare to white pieces from various sets. In the following two pictures, each file has a couple pieces from a different set. From left to right, these are my first Chess set, the Chancellor and Archbishop from the Camaratta kit, the natural colored single-weight regulation King and Queen, the Chancellor and Archbishop from Gothic Chess, a cream colored King and Cardinal from Cambaluc Chinese Chess, and finally an ivory colored plastic regulation King and Queen.

These two pictures show the Elephant, Chancellor, and Archbishop alongside some of the natural colored pieces I ordered:

The preceding pictures were taken with my digital camera, but I also took some with my webcam. This one shows the white pieces lined up by height:

Since I took that picture before the Fortress & Unicorn and Dragon & Spider kits came out, here is a more recent photo from John Davis showing all the pieces lined up with the Chess pieces.