please note this game has been updated august 6th 2005
new update adds an extra piece (another 'flying comet') and different positioning of generals and pawns, and another variant with a different piece ('flying horse').

hi everyone :)
i saw the movie 'house of flying daggers' which is set in ancient china, and it has these warriors that throw daggers long distances to attack/kill their enemies. so that is how i got the idea for this game. you can attack the enemy king from home-base! it has 4 new pieces.
* flying sun - moves like a 9-1 knight (leaps 9 forward, 1 sideways) and a sideways dabbaba.
* flying moon - moves like a 8-1, 7-1 knight and a mao.
* flying star - moves like a 6-1 knight, alfil and king.
* flying comet - moves like a 5-1 knight, alfil and king.
flying sun and flying moon can actually mate the enemy king from their 1st and 2nd ranks!!
sometimes the safest place for the king is moving up the board :) it took me ages to get this game playable, i nearly gave up lol. hopefully this game is sound, because if i have to go back to the drawing board, i really am going to scream :)

i know it might be strange to release a game and have a variant that really needs testing lol, but hey that isn't going to stop me :)
*flying horse - moves like a 4-1 knight, alfil and king.
this piece could be too dangerous for this type of the game (mate threats galore) but i did test it once (lol) and it played good, and, i just like the look of the 'flying horse' :)
let's put it down to intuition he he
it could be the best set up, so i have added it for testing.
there are another 2 variants in this zrf actually, 3rd variant is the 'failsafe' variant if the main 2 variants fail :), and the 4th is the original variant i first was happy with, which is now only for whatever :)
the 'readme file' within 'flyingdaggers' adds a lot of my thoughts when play testing this game, if that is of any interest. 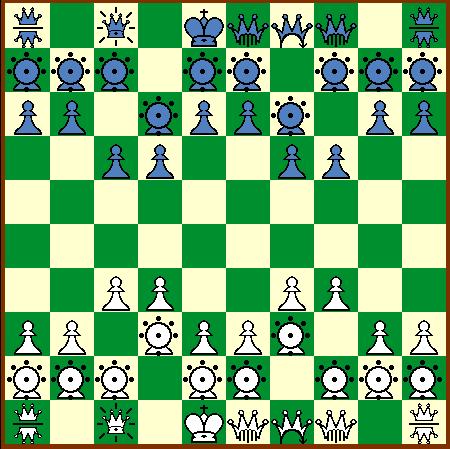 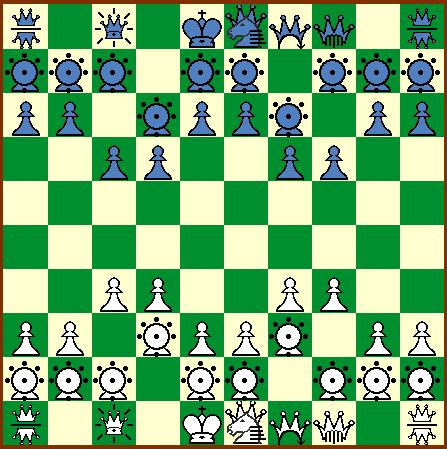 i would love to hear what anyone has to say about these variants, as i think this game is pretty interesting and to find the best set-up would be kinda cool :)