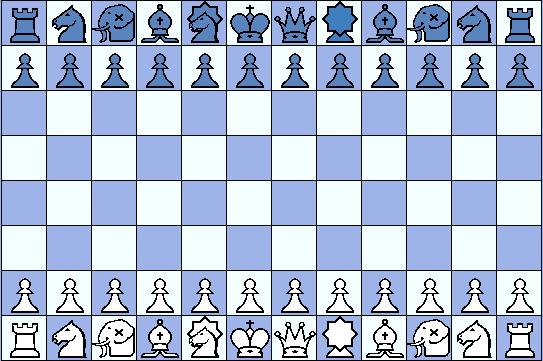 In 19th, a modern Courier Chess, most pieces are beefed up to be like modern Chess:

* When castling, the king moves to the square on the c-column or j-column; the rook goes to the nearby square jumping over the king (so to d1, i1, d8, or i8.) Castling is permitted, if all squares between the king and the rook are vacant and not under attack, neither the king nor the rook is attacked. * The courier moves like a bishop from orthodox chess. The fool moves one square in an arbitrary direction. The sage has the combined moves of a knight and king. * The archer moves one or two squares diagonally. When the archer moves two squares diagonally, it may jump over an occupied square. * The pawn moves and takes like a pawn from modern chess (including the possibility to make a double step at its first movement and en passant capture). After a pawn reaches the last row, it must stay there immobile for two moves, only at the third turn after the movement of the pawn it may move as the piece it is promoted to. So, if white moves a pawn to the last row, then first black moves, then white, then black, then white again, then black again, and then white may move with the pawn as a promoted piece. * There are a few rules here that are unclear: can the pawn be captured while it is waiting to be promoted? Gollon favors an immunity for capture here, and such a rule seems quite plausible and reasonable. * A pawn only promote to a Queen (Unclear?). * In addition to checkmate, a player can also win by stalemating the opponent. Another way to win is to capture all the opponent's pieces(except the King).