Here's yet another 10x8 board Chess variant named after a font.

As standard FIDE Chess, with the addition of of a Mann (non-royal King) and a Centaur (Mann plus Knight). Pawns may promote to Knight, Bishop, Mann, Rook, Centaur or Queen. Castling is extended one square in each direction -- the King moving three squares toward the Rook -- and otherwise like FIDE Chess' castling. 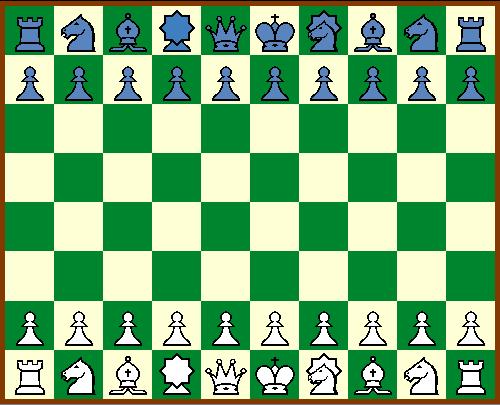 Where This Came From

There were a couple of sources of inspiration for this, yet another font-named 10x8 Chess variant. The immediate inspiration was Fergus Duniho's publication of his Univers Chess, although this game doesn't take very much from there. Another source is an unpublished variant of my own Not-Particularly-New Chess called Post-Modern Chess. The third source was a series of e-mail discussions with David Paulowich about appropriate piece strengths. David prefers adding weaker pieces than Queens (and in fact, getting rid of Queens as too strong). Thus, this game.

This is also my experiment with using the user posting system.

In the opening, try to develop your pieces more than your pawns. Always protect your King. Look for ways to exchange lower valued pieces for larger valued ones. The Bishop is probably worth a bit more than the Knight on this larger board, the Mann has been variously valued at Knight and Rook value, but is probably closer in value to the former than the latter, except in the endgame. The Centaur is probably intermediate between the Rook and the Queen, except in the endgame where it is probably as good as a Queen.