One style of game that has been less extrapolated than most is Yonin Shogi's pattern of a four-player array placing each army in a triangle sticking out from a side of the board. This is an attempt to apply it to the pieces familiar to players in Europe and the Americas. As these include so may long-range pieces I decided to have four full armies on a Nearlydouble Chess board. To avoid binding all eight Bishops to the same squares I use the Unhexed Chess trick of putting the Bishops on the first two squares of the middle files. I also decided to follow the Bishogi promotion and return rules as Knights could do with being promotable on so large a board and having pieces return from capture makes for more interesting dynamics in terms of how army size discrepancies build up. You can use Shogi sets to represent the pieces in the way described in Bishogi.

Remarkably, it was not until 2016 that I noticed how similar the array was to the one shown on this external link page. The extra Pawn in Yonin Bishogi, to use all of two distinguishable FIDE sets, is not a great difference, but hopefully the addition of Bishogi promotion rules is a morew significant one. 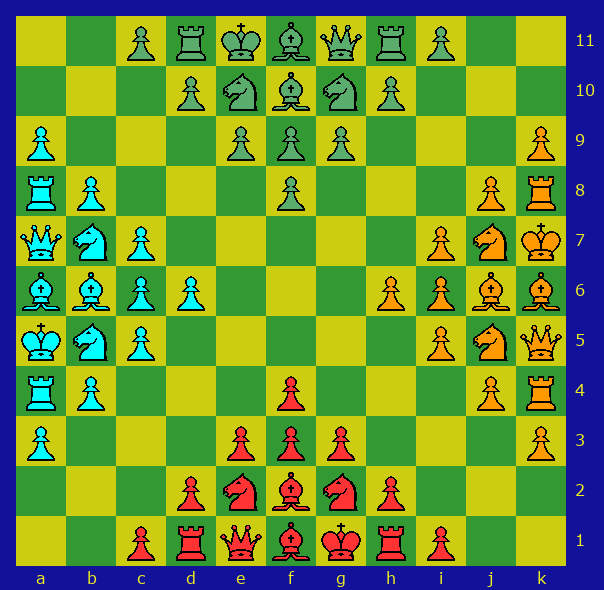 As in FIDE Chess - or perhaps more accurately, as in Bishogi

A Pawn on any Pawn starting square of its camp may make a double-step noncapturing move, regardless of whether it has already made one or more capturing moves - or in the case of rear Pawn of the middle file a previous noncapturing one - to get there. It may however be immediately captured En Passant by an enemy Pawn poised to capture it had it moved only a single step.

Pawns and simple pieces are promotable to Queen on reaching or crossing the diagonal connecting the opposite player's King square to either adjacent player's King square. This is based on an idea of making the promotion zone parallel to the front of the camp, which like the arrangement of the Bishops echoes Glinski's and McCooey's hex games. The way that capturing outward brings a Pawn two steps closer to promotion instead of the usual one further echoes McCooey, and the way that capturing inward brings a Pawn no closer to promotion durther echoes Glinski. A Pawn reaching the far rank must be promoted.

A player capturing an enemy piece can, in place of a normal move, reintroduce that piece as part of their army, in unpromoted form. Pawns cannot be reintroduced on the rank where promotion would be required.

A player is Checkmated when their King is threatened by the player about to move. That player's pieces are removed from the game and the remaining players then alternate moves starting with the Checkmating one. The last player not Checkmated wins.