This variant is to Xiang Qi what my Chaturanga variant Chatukanga is to Chaturanga. As in Chatukanga, I get rid of the Ferz, replace it with a compound of two of the paired back-rank pieces, and add in the other two such compound pieces.

Two differences relate to XQ elements absent from Chaturanga and its westerly offshoots. As Xiang Qi has two Ferzes aside, I substitute two of each compound piece aside rather than the one each of Chatukanga. What I do not compound is the Cannon, which is neither a back-rank piece nor a piece with standard Occidental analogues. Since posting this variant I have devised distinctive names for the Cannon's compounds with any kind of Knight (Marksman) and any kind of Elephant (Minethrower), and Chatehopper is a fairly unambigious term for Cannon+Wazir, but at the time Cannon compounds seemed an unnecessary complication. Rook+Cannon would definitely be off limits as too strong in individual directions.

Having twice as many compound pieces as Chatukanga makes up for the relative weakness of Stepping moves compared to Leaping ones, which would leave Xiang Qi's General rather weak against them. As, however, the Ferz move lives on in Chatukanga as part of the King move, I feel quite justified in adding the Ferz move to the General to give the King familiar to Occidentals. At one stage I considered a King whose diagonal move was restricted to the diagonals through the middle of the Fortress, as in Janggi, but decided that this too would be a complication too far. 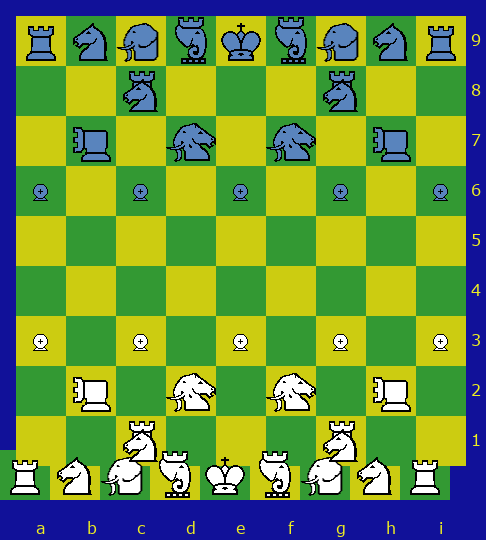 Pieces existing both in their own right and as components of compounds Pieces not involved in compounds: Compound pieces:

The King cannot leave a Fortress comprising the intersection of the back three ranks and middle three files. It inherits this property from the General regarding its orthogonal move, and from the Ferz regarding its diagonal move.