This variant came to me very suddenly through a series of coincidences relating to the westernmost part of Inner London. A new shopping centre opened (after which the variant is named), with an expansion in public transport in the area including new and expanded stations. Meanwhile I was in increasing communication with an employee of one of my firm's clients based in that part of London, a woman with a very attractive voice and the geographically appropriate surname Goldhawk. Geographically appropriate personal names grip my imagination, and this one inspired ideas for new pieces. As they are mixed-range and not entirely symmetric there is enough resemblance to Jared McComb's Ryu Shogi for me to credit him as an influence. I also threw in an idea of pieces "shepherding" each other, a broader but shorter version of the pushing in Push-Pull Train Chess, one of my modest variants, and inspired by the image of a shepherd driving his flock before him. I made the variant unidirectional - both players share the same "forward" direction in the style of Viking Chess. Finally I followed my usual practice for variants themed on post-WW2 Britain by having no King, but this game has no capturable Prince either as that piece would add little to the array. Full geographical details are included in Notes.

I fast-tracked this variant as I wished to use its pieces in a game before including them in my Man and Beast series of piece articles. The idea of these pieces settled my decision to give that series a final further article, which I posted four weeks after this game.

The dimensions are the same as those of Courier and Colchester Latrunculi, but this is by chance. They are a natural progression from combining larger armies with the Viking Chess kind of unidirectionality. 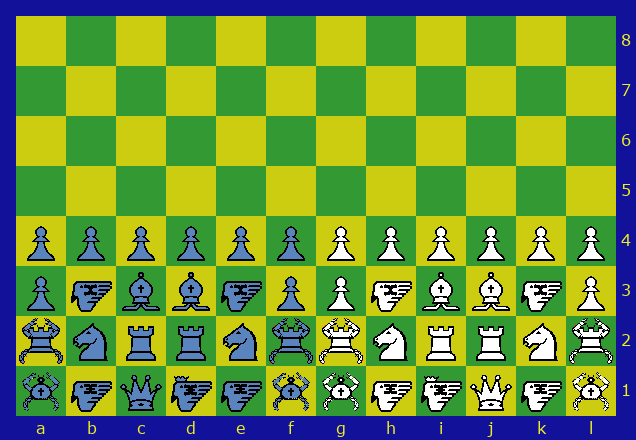 Pieces can be represented by two distinguishable sets.

FIDE pieces, represented by themselves from set 1:

Shepherding pieces, represented by themselves from set 2:

Pawns have no initial double-step move under their own steam. There is no Castling.

When a Shepherding piece moves it pushes any non-Shepherding piece of either army on three adjacent squares, one on the first intervening square of the Shepherding piece's move, one on the first square of each of the two flanking directions. This move is termed a Shepherd's Push. These squares need not be occupied for it to move, but if they are it cannot move without pushing them. A Shepherding piece cannot itself be pushed. Which way each pushed piece moves is determined by what kind of piece it is and its position relative to the piece moving it. All moves made as part of a Shepherd's push must be:
1 the same number of steps, counting a Knight leap as two steps;
2 no more than two steps if one of the pieces is a Supersilver or Pawn;
3 legal (save for the dispensation of two-step moves) as if all pieces were moving under their own steam, including not reaching their allies or overtaking their enemies;
4 in broadly the same direction. The following diagrams show the direction of the Shepherding piece in red and that for a piece subject to a Push in blue if compulsory or in green if a choice of two. The Shepherding piece's owner makes the choice. Directions shown are forward, but other directions are available unless a Pawn is being pushed. On each line the diagrams for a Shepherding Rook and Shepherding Bishop are shown in that order.

A Queen can be pushed as if it were a Rook or Bishop, again at the choice of the Shepherding piece's owner. Likewise a Supersilver but no more than 2 squares and not at all orthogonally backward. A Pawn can only be pushed orthogonally forward to an empty square, or one step diagonally forward to an occupied one. As forward is the same for both players a group of Pawns from both armies can be pushed as if they were all of one. A Gold or Silver piece can be pushed in its long-range directions like a Queen or in its short-range ones (but including othogonally backward in the Silverhunter's case) like a Supersilver.

A Supersilver or Pawn moved two steps by a Shepherding ally can be immediately captured En Passant, as if it had moved only the one step, by an enemy of its own kind moving under its own steam. Likewise a Gold or Silver piece moving two steps in one of its short-range directions. This may or may not also involve capture of the Shepherding piece!

Victory is by capturing all enemy pieces.

There can be no Goldhunter, Goldhuntress, Silverhawker, Silverhawkress, or even Silverhuntress as the unprefixed piece covers directions that the prefix does not. Corner orientation and 3d geometry allow a Silverhuntsman, but no Goldhawksman. The only cubic prefixed pieces ending in -swoman are Skyhawkswoman and Skyhuntswoman as the Sky directions are the only part-symmetric set including the entire Prince move.

The setting is toward the northern end of Hammersmith, Inner London's westernmost borough. The Westfield shopping centre is located between Shepherd's Bush, on which my Shepherd's Push is a pun, to the south and White City, which can be seen as represented by the presence of a White army, to the north. Further south along this axis is Goldhawk Road, reflected in the Goldhawker and Goldhawkress pieces. Further north is the area around, and named after, the North Pole public house. This is reflected by the unidirectionality which I have associated, ever since seeing Viking Chess, with two armies entering the frozen north to do battle as much with the common enemy of the elements as with each other. Use of the Supersilver refers to what goes on in public houses via its use in Shogi variants under the name "Drunken Elephant" - although the Elephant is an area named after a public house in a quite different part of Inner London!

The Silverhunter could be seen as representing a shopper frantically searching for change. The use of "silver" for currency in English slang still has some... well, currency, albeit less than "argent" has in French.

There is no connection with the University of London's former Westfield College, which was in yet another part of Inner London and closed many years before the shopping centre opened. Therefore the marker piece for my academic-themed variants is not used.