Historically, chess has overwhelmingly been a game of 2 players with each player moving one piece in turn. The attempts to make chess a multimove game have fallen into a few categories, generally games where players get some arbitrary in game terms, usually low, number of moves per turn, 2 being the most common, or games where the number of moves per turn increases or decreases as the game goes on. Only one game I know of, Fred Lange's Megachess, uses the number of kings a side has on the board to determine the number of moves that side gets in a turn. This actually makes sense to me; it provides a good reason why a player gets more than one move, and also why standard chesses only move once - they only have one king/side. The two games presented here, Superchief and Overlord, use that idea of one move per king to examine how not only multi-move games, but also multiplayer games might be developed further. Both games are modest variants of Chieftain Chess. Interestingly, all 3 games tend to be effectively over in around 35 turns or so. 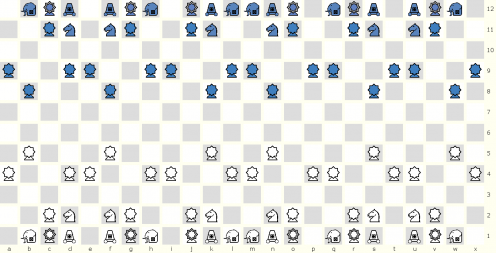 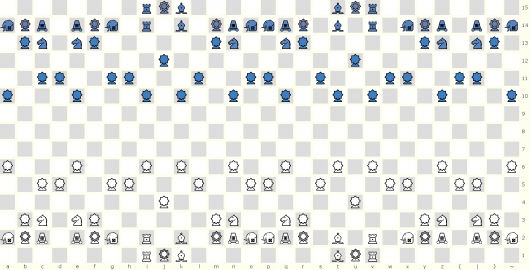 B - Bishopy. This piece moves as a 4-square bishop or a dabbabah. It slides up to 4 squares diagonally, or leaps to the second square orthogonally, jumping over the first orthogonal square and any piece that may be in that square. In Betza's funny notation, it would be a B4D.

R - Rookish. This piece moves as a 4-square rook or an alfil. It slides up to 4 squares orthogonally, or leaps to the second square diagonally, jumping over the first diagonal square and any piece that may be in that square. In Betza's funny notation, it would be an AR4.

Victory: The game ends when all Chieftains of one color are captured.

Gas Hogs: Warriors of the Silicon Plain
Ran into a rules problem during playtesting. Nobody understands activation. The rules are technically correct, but by themselves are inadequate to give people a 'feel' for how leaders, command radius, and activation *really* work. A good analogy to something familiar is needed. I've actually managed a silly analogy that I hope and think works. Comments are solicited. This part of the notes is copied from two comments on Chieftain Chess.

Q: I don't understand activation. How does it work?

A:Pretend all the pieces are robots, little gas-powered robots.

They have their engines and little gas tanks in their bases, the bottom of each piece.

Every piece, from chief to warrior, has its own engine and gas tank in the base of the piece.

All of these gas tanks are empty at the start of the game.

There are some special robots that have storage tanks in their heads, and a gray band around their storage tank.

At the beginning of each turn, this gray band sucks gas right out of the air, and fills the storage tank in the 'head' of the piece. [The 'storage tank' is the 8-pointed star shaped area inside the grey band on the chief icon.]

Each storage tank holds enough gas to fill 1 piece's gas tank, then it is empty until the beginning of the next turn.

The gray band unfolds into a hose that reaches 3 squares [or the gas tank in that chief's base, allowing it to move itself unassisted], allowing gas to be pumped to any one piece within that 3 square range.

Each gas tank holds enough gas for 1 turn, then it's empty again.

A chief's gas tank can be filled by another chief's storage tank, allowing that first chief to carry its own storage tank load of gas with it. So it can then fuel something else 3 squares away from where it has just stopped.*

Remember: each piece must gas up just before it moves, and then it must move immediately, or the gas evaporates. Gas cannot be saved up for a later turn.

These two games give one example of what can be done by using some simple ideas/rules that begin to create a higher-level organization of pieces in chess variants. The two games can be characterized by saying their leader[king] pieces can each activate[move] one piece per turn, at a distance[command control radius] of three squares. There are other options. Leaders may control one or more pieces, at a range of up to one or more squares. A hierarchy of leaders can be established, with lesser leaders needing to be within some specific range to a higher-level leader. Using different values of leader orders per turn and effective ranges of orders give games, strategies and tactics, and pieces themselves that are radically different from other chess variants.

Here, I've tried to keep the games clean and fairly simple. All pieces are short range. There are only 5 types of pieces in Superchief, which starts with 48 pieces per side. In Overlord, 2 new short range pieces are introduced, giving 7 piece types for 64 starting pieces per side. This allows players to concentrate more on the novel ideas in the games than on constantly re-learning 25 different piece moves each turn.

- Leader2. This is a royal piece. It slides 1 or 2 squares. It may not jump. It may change direction during its move, but may not move back to the square it started from. It has the special power of activating 2 pieces per turn, at a command control range of 1 or 2 squares [but not 3], so they may both move. Preset