Teramachy is the child of Metamachy with 12 rows and Terachess with 16 columns. This is a Chess variant with 23 different pieces on a 16 x 12 square board. There are the familiar 6, the 6 encountered in Metamachy, the 5 coming from Zanzibar-S and the 6 FIDE compound pieces.

The board has 16 x 12 checkered squares with a white one at the right end of each player.

There are 48 pieces per side: 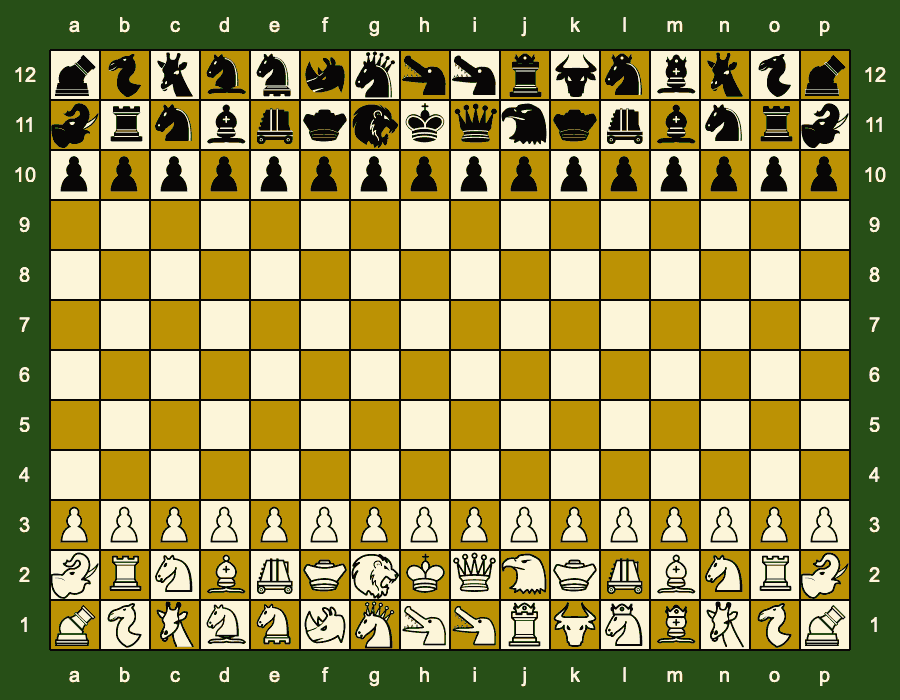 Rhinoceros: moves one square vertically or horizontally and then slides away an indefinite number of squares diagonally. It is authorized to go only one square in along its rank or file. It cannot jump, and the unobstructed path must start with the orthogonal movement. This piece is inspired by the Unicorn of medieval Grande Acedrex. It is a counterpart of the Eagle.

Pawn and Prince Promotion: A Pawn or a Prince reaching the last rank of the board is immediately replaced by an Amazon, a Lion, an Eagle, a Rhinoceros or a Buffalo. Promotion to any other type of piece is not allowed. It is permitted to promote a Pawn or Prince to a type of piece already present on the same side; however; it is considered "good etiquette" to avoid choosing a piece which is not captured yet, if possible.

A lot of players would disagree and give less or more points to several piece. Never mind, make your own scale.