This variant was inspired by thoughts of pieces with exactly eight moves, one in each (square-cell) radial direction, going one number of steps along all orthogonals and a different number along all diagonals, in all cases in the range 1 to 3 steps. This gives six kinds of piece, all included in my piece article Man and Beast 06: The Heavy Brigade. Four are unbound and the other two only as bound as the Bishop, so I was looking at eight individual piece for all types to cover the board.

Next I wondered what kind of variant could use them. Shogi has always made good use of short-range pieces and its back rank has, guess what, eight capturable pieces plus the King. The new pieces would have a longer range than Shogi generals - or even their counterparts in my own Dai Mitregi, but that is at the expense of losing forward-only long-range pieces. Therefore I looked to a 9x9 board, Shogi 2nd and 3rd ranks, and pieces returning from capture. As the back rank would comprise symmetric pieces, I settled on naming the variant Symgi. Paradoxically the back rank lacks reflectional symmetry, as there are only one of some and I wished to put the paired pieces on different bindings. There is however Shogi's own rotational symmetry within the array as a whole. The pieces with the longer orthogonal move are on the Bishop side and those with the longer diagonal move on the Rook side for balance those pieces.

Overall this variant can be seen as another member of a growing spectrum of variants with FIDE Chess at one end and Shogi at the other. This currently runs:
* FIDE Chess;
* Chessgi (adds reintroduction of captured pieces);
* Crazyhouse (adds promotees returning unpromoted);
* Bishogi 64 (adds promotion of all, no choice of promotee);
* Bishogi 81 (enlarged to Shogi board and size of army);
* Symgi (Shogi 2nd and 3rd ranks, short-range symmetric pieces in 1st rank);
* Shogi. My later variant Frontofhouse could be seen as an alternative link en route from Bishogi 64 to Shogi.

The stepping subvariant also has something of the flavour of Xiang Qi, the leaping one of Chaturanga, and the MD one my own Cannonless XQ variants, by the nature of the longer short-range moves.

A later variant of mine, Ringworld Chess, uses AltOrth analogues to this variant's pieces. I have not as yet considered a variant using McCooey analogues to them, as the hex diagonal carries pieces forward so quickly. A cubic version of Symgi would require 1 aside of 10 kinds of piece (Waffle, Wazzock, Warper, Warmer, Frog, Paddick, Bullfrog, Natterjack, Newt, Eft), 2 aside of 4 (Fezbaba, Fezzock, Tribune, Juniper), and 4 aside of 4 (Vicbaba, Wilful, Dazzler, Lazarus). This plus an Emperor would make a 35-piece back rank, so perhaps 5 levels by 7 filestacks by 9 ranks = 315 cells. I imagine the back rank having the Emperor at the centre and a corner each full of Vicbabas, of Wilfuls, of Dazzlers, and of Lazaruses (Lazari?), but how the other pieces would be arranged and what would be on the next two ranks is open to suggestions. Such a variant might be called Froschschach, if this has not been used already. 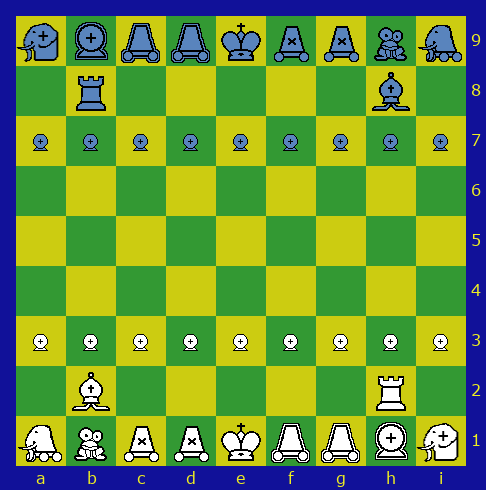 Array pieces inherited from Shogi: Promoted forms of the above: New array pieces:

Players capturing enemy pieces may reintroduce them in place of a normal move. A captured corner piece (Waffle or Newt) can return as either corner piece, and a captured next-in piece (Warper or Frog) can return as either such piece. A player cannot have more than one unpromoted Point on a file, or more than one of a colourbound piece (including both Bishops unpromoted) on the same binding.

Back-rank pieces are not promotable, as their symmetric nature nullifies the need for their promotion. Rooks and Bishops inherit their Shogi promotion rules (including losing their promotion on returning from capture), mainly because promoting Bishops unbinds them.

Points may optionally be swapped with a stronger enemy captive, if there are any, when ending a move in the enemy camp. This swap is permanent and survives recapture. A Point reaching the far rank must be so swapped unless there is no such captive, in which case it is promoted to a Wazir by the normal flipping. A captured Wazir returns as a Point. A Wazir returning to its own camp must be swapped with a stronger enemy captive, again unless there are none, in which case it flips back to being a Point. In the latter case the move is disallowed if there is an unpromoted Point on the same file. Any Rook or Bishop returning through a swap does so unpromoted, although promotion on its next move may well be possible.

Check, Checkmate, and Stalemate are as in FIDE Chess (and Shogi).

This variant can be played with a standard Shogi set, using opposite faces of the same physical piece type for Waffles and Newts, likewise for Warpers and Frogs. This was of course what inspired the interchangeability rule.

The 125% and Flyover Shogi approaches to expanding to 4 players can be applied to this just as they can to any 9x9 variant with 20-piece armies.

One thing that can be done better with a symmetric-piece back rank than with a standard Shogi one is changing the orientation. Thus it can be used for a corner-based array, such as: 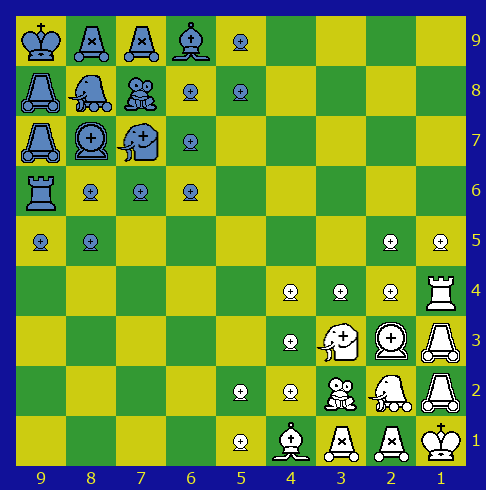 or even a four-player array, such as: 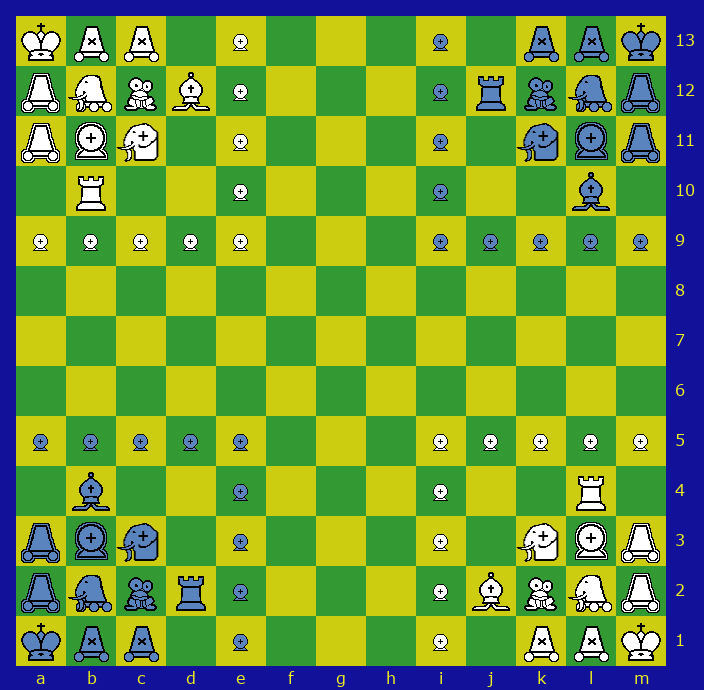 The name of this variant has no connection with that of Symchess, which refers to the symmetry of the array. A return-from-capture variant of that would be called Symchessgi or Symbishogi, depending on whether promotion survived capture or not. Whether you could have a Symshogi or even a Symsymgi is another matter.

Symgi uses only 6 - or 7 if you count the King - of the 15 possible compounds of two 1-3 step simple pieces. Is it worth considering a "Dai Symgi" adding more of them? Even discarding the Alibaba and its 3-step counterpart the Trilby as bound to too few squares, the answer is probably no, given the response to Dai Mitregi.