Shogchess was invented by H. Ã“. Kjartansson who likes to play shogi and chess. So he made a chess variants that combined these two games, it has the castling rule from chess and the starting setup, promotion rule and the drop rule from shogi (Therefor, all pieces are same color. Their direction tells which player it belongs to). All pieces used in shogchess are used as well in shogi or in chess; or in both; except for: the Amazon (a promoted queen), the Alifil or Elephant (which comes from xiangqi), the Vazir and the Camel 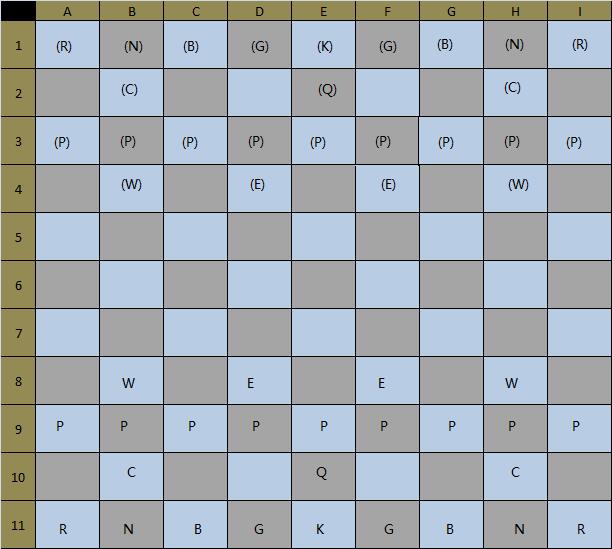 The game is played on a board 9x11 squeres.

NOTE: All pieces are of the same colour. Only the direction of the pieces tells which player a piece belongs to. P=pawn. The pawn of shogchess move as in shogi, ie. one squere orthogonally and captures as it moves. They may step two spaces orthogonally without capturing on their very first turn. The pawn promotes to gold.

W=wazir. It is the first of four pieces that doesn't belong to shogi or to chess. It moves one squere orthogonally and captures as it moves. Promotes to gold.

E=elephant. Another piece that doesn't exist in shogi or chess. Moves exactly two squeres diagonally. Can jump over other pieces. Promotes to a bishop

C=camel. The third non-shogi non-chess piece. It is a (3,1) jumper and promotes to a knight.

N=knight. Moves exactly as in FIDE chess. Promotes to gold.

G=gold. Moves as a king but can't move diagonally backwards. Does not promote.

B=bishop. Moves as in chess. Promotes to a pegasus.

R=rook. Moves as in western chess and promotes to a dragon.

Q=queen. Moves as bishop or as rook. Promotes to an amazon.

K=king. The royal piece, if it gets captured, you lose. Moves as in chess.

S=pegasus. Moves as king or as bishop. Note that the pegasus isn't royal.

D=dragon. Moves as king or as rook. Note that the dragon is not royal.

A=amazon. Moves as a queen or as a knight. Note that the amazon isn't royal.

1. The object of the game is to checkmate the opponent's king.

2. If a sequence of moves is repeated three times, the game is a draw.

6. Pawns may move one or two squeres on their very first turn. A pawn dropped on it's starting file is seen as not moved, so it may take two steps.

8. You cannot mate by dropping a pawn.

If you think you can help me make this game better, please contact me at : [email protected] Enjoy!