This page is written by the game's inventor, David Paulowich.

The name Shatranj Kamil, meaning Perfect Chess or Complete Chess, was given to several chess variants on 10x10 boards around 1000 years ago. For examples see Shatranj Kamil I and Shatranj Kamil II. Usually the variant would increase the size of each army by two pawns and two new pieces (for example, the dabbabah). Jean-Louis Cazaux wrote [2006-05-14]:

But the most important mistake is the Pawns which should be arranged on the 3rd line! (Murray, p341).

This variant was already posted when I discovered that useful fact. In my continuing search for a perfect blend of pieces, I have examined games from places as far away as China and Japan and Mars! 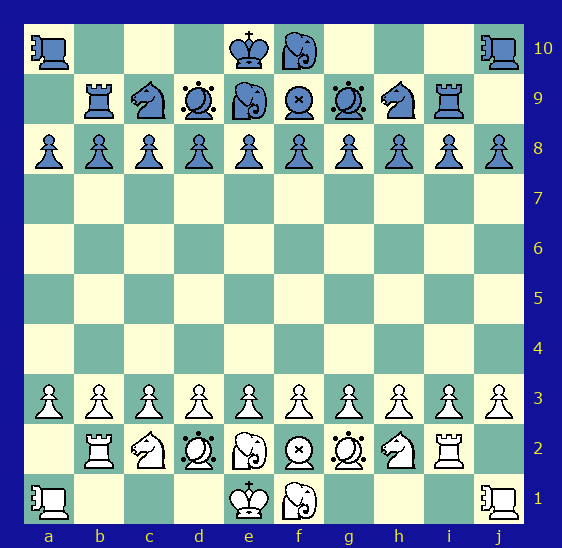 This game keeps all the pieces of Shatranj, while giving the elephants a more useful move. I took the forward pawn structure of MAKRUK (Thailand) and SHOGI (Japan), and moved most of the other pieces up next to the pawns. Each army has one King, one Ferz and two Elephants, which move like the Chained Padwar in JETAN (Martian Chess), invented by Edgar Rice Burroughs ninety years ago. This nonleaping piece makes every move possible for a Chinese Elephant and also makes "bent moves" like f1-e2-f3 and f1-g2-f3. Thus it always makes exactly two diagonal (Ferz) moves in a row, ending up two squares away from its starting place. Do not confuse it with the Alibaba. Note that the "Elephants on their own colors" setup here requires a checkered board for ease of play. I kept the pair of Silver Generals from MAKRUK (and SHOGI) and added Cannons from XIANGQI to the four corners of the board.

Each Cannon can capture a Pawn in the initial setup, giving White 32 possible first moves. All pawns promote on the player's tenth rank to War Elephants (not in the initial setup). This colorbound piece, combining the moves of the Ferz and the Elephant, is identical to the Free Padwar in JETAN. It can also be found in my variants Opulent Lemurian Shatranj and Midgard Chess. In order to make the Ferz piece equal in value to the Elephant, I decided to have the Ferz also promote to a War Elephant on the tenth rank. War Elephant Rules: [1] slides 1 or 2 squares like a ferz. [2] may change direction during its move, but may not jump. [3] may not make a null move (move off and then back onto its starting square). [4] a capture immediately ends its move, no piece in this game is allowed to capture twice.

NOT FOUND IN THIS GAME: (modern) Pawns and Jesters, which can both make a special initial move. Also not found: the (different) Elephants in my 2005 chess variant on 64 squares.

No king's leap or castling rules in this game. Pawns never move more than one square. I have eliminated the bare king loss rule, but otherwise tried to remain true to the spirit of the old Shatranj rules.

[Rule 1] Mandatory promotion of a Pawn or a Ferz to a War Elephant of the same color on the player's tenth rank.

[Rule 2] After your opponent has been reduced to a lone King, you may claim a draw at any time. The game is automatically drawn when only the two Kings remain on the board.

[[Rule 3] Checkmating your opponent wins the game. Note that you require a king and at least one other piece in order to checkmate your opponent.

[Rule 4] Stalemating your opponent wins the game, except when you have only a lone King. Then the result is a draw.

AL-CES [2000]: 40 empty squares, 60 pieces, 13 piece types. When an Alfil reaches the last rank, it may promote to a Bishop or stay as it is. This is an early example of minor piece promotion in a "western" variant.

Play Online: Shatranj Kamil X can be played on this site with Game Courier. A fully automated, rule-enforcing preset for this game can be found here. You can also view games that have previously been played on Game Courier here.