A very slight variant of Old Shatar which keeps the traditional 8x8 board, pieces and rules, with exception of having placement of a Bodyguard (Hia) added to each side after their initial King moves (1 Hia for White, 1 Hia for Black). When the King moves for the first time, place a Hia (Bodyguard) on the vacated square.

But at the moment the Hia (du or DU) must manually be removed at beginning of game. 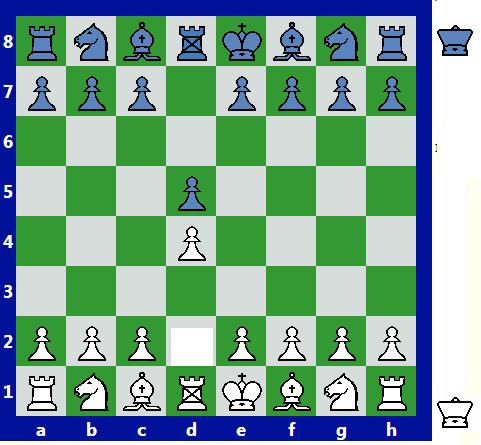 â€¢Queen (Berse)or baras - Is like a promoted rook in Shogi (Japanese Chess) and moves either like a rook or one square diagonally.

â€¢Knight (Mori)- same as in western chess, but cannot give mate.

â€¢Pawn (Chu) or kuu - does not have a double initial step, with the exception of the queen-pawn. Pawns only promote to Berse (Queen). The first move of the game must be: 1. d2-d4, followed by black playing d7-d5.

â€¢Bodyguard (Hia) Moves and captures like a Queen in western chess, but can move only one or two squares. The Hia cannot give check or mate (Kings are immune to it and can move next to and capture it). The Hia also has a special field of influence such that (1) a Queen, Rook, or Bishop sliding through any square adjacent to the bodyguard, must stop its move; and (2) Any piece adjacent to a bodyguard can move only one square.

Note: See Jose Carrillo's excellent write up and diagrams for the Hia under Hiashatar rules or under his Hia Chess rules which include diagrams explaining the Hia.

The rule information except for Hia aspect are based on Hans Bodlaender's 1998 Shatar-Mongolian Chess write-up,which in turn is based upon text by Fabio Forzoni.

Regarding the Hia (Bodyguard) it is suggested that players visit Jose Carrillo's rules for the Hia under his text for Hiashatar or his Hia Chess.