This page is written by the game's inventor, Sam Trenholme.

Schoolbook is my take on 8x10 chess with the rook + knight and bishop + knight pieces added. While a number of different opening setups using these pieces and board have been proposed, I have not been completely satisfied with any of them. My goal, in designing Schoolbook, was to come up with an 8x10 opening setup with the following characteristics: There are two opening setups which meet this criteria. I chose the one where white's queen is left of his king, since this allows a right-side castle to be done more quickly, and since this preserves the traditional idea of having a "king side" and a "queen side".

The name "schoolbook" comes from the recent tradition of naming 8x10 chess variants after fonts. 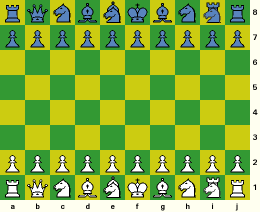 For people who can not see the image, the ASCII version of the setup is as follows:

Names of the pieces

R: Rook. Moves as a Chess rook; the only difference is in how this piece may castle.

B: Bishop. Identical to a chess bishop.

K: King. Moves a a Chess king; object is to checkmate this piece. The only difference is how this piece castles.

A: Archbishop. Has the combined moves of a knight and bishop.

M: Marshall. Has the combined moves of a knight and rook.

Value of the pieces

A lot of research has been done in determining the values of the pieces in 8x10 chess variants with the rook + knight and bishop + knight pieces. Schoolbook is able to utilize the fruits of this research.

Here is a table of four different derived values for the pieces, obtained from three different chess variant playing computer programs and one other source.

The figures generally agree on the following:

The verdict is still out on some other exchanges:

Castling comes from Fergus Duniho's Grotesque Chess: The king may castle two or three squares towards the rook on the right hand side, and two, three, or four squares towards the rook on the left hand side. The rook leaps over the king to land besides the king. The king can not castle out of, through, or in to check. Both the king and rook that the king castles with must not have previously moved.

The notation used for this game is standard algebraic opening, where the lower left corner is square a1, the upper right corner square j8, and 'A' signifies the Archbishop and 'M' signifies the Marshall. When no piece name is specified, a pawn is assumed to move. For example, f4 is the move that moves the King's pawn to the forth rank. When castling, only the King's move is noted, such as "Kh1" to signify that the king has moved to h1 and the rook to g1. In order to minimize the confusion between "i" and "j", the I file is always upper case in notation.

The rules are otherwise as in FIDE chess.

The opening of Schoolbook hs many similar themes to the opening of FIDE chess, since both games have the knights and bishops in the same position relative to the king in the opening setup. There are, however, a number of differences. For example: One good opening position for white is as follows:

Black's goal is to stop this kind of opening setup. Considering the tactical power of all of the Schoolbook pieces, Black has many options to try and equalize.

I make no intellectual property claims whatsoever with this (such as it is) invention. Note that the diagrams uses a piece set based on a font that is only free for non-commercial use. I have made an attractive set of chess diagram pieces which I can use without worrying about intelectual property claims; these pieces can be seen here.

While Smirf does not implement Schoolbook's castling rules, it is possible to get the Schoolbook opening position in SMIRF by selecting a new CRC game, and selecting position number 27621.

For people who own the commercial program, I have made a Zillions of Games rules file that allows one to play Schoolbook chess here.

I have also made a Game Courier preset which is available here.