This variant was devised to celebrate the start of the full service of commuter trains on the high-speed railway line between London and East Kent (1). Until these trains were introduced all lines of this kind in Europe were dedicated to long-distance passenger expresses between major national or regional population centres - in this case London, Lille, Brussels, and Paris. The introduction of the Kent commuter trains made it unlike Continental high-speed lines... but like the Japanese high-speed lines, or Shinkansen. These have long had both the Hikari (lightning) long-distance trains and the Kodama (echo) intermediate-distance ones (2). A Japanese link meant of course a Shogi variant, and the two levels of service also suggested to me the two sides of a piece. Now reading Hikari=promoted and Kodama=unpromoted doesn't quite work with standard Shogi promotions as one-step Goldgenerals are promotions of (among others) longer-distance forward-only pieces. However, the "Sainted Shogi" rule mentioned in my Unidirectional variants - substituting a second Bishop (3) for the array Rook and promoting Shogi pieces by adding moves of their Xiang Qi positional equivalents - suited the theme far better. This variation always promotes absolutely, rather than just in terms of the piece's location at time of promotion. The name of that variation, after the Saint which is one of its promotees (Bishop+Cannon) also ties in with the London terminus of this line at Saint Pancras (4), which also has trains to the major cities of the East Midlands (5). This gives the themed variant in turn its name.

In practice I modify in one respect Sainted Shogi promotion as defined for unidirectional Shogi: Promoted Points gain only sideways steps, as in Xiang Qi, as they are promoted in the actual enemy camp. The two levels of service I represent with two sets, save for a King and Point aside. Points follow the pattern of Frontofhouse Pawns and all Shogi-set Nearlydouble pieces by all starting unpromoted, but other promotable pieces start with two aside with each face up. As "promoted" usually means promoted from an array status, I term the face that includes the XQ move Hikari and the face that doesn't Kodama after the train services. Pieces starting Hikari return from capture Kodama, following the model of the Frontofhouse back rank. Again like them such pieces can resume their array move by returning from capture and subsequently being promoted, just as Kodama array pieces, like Frontofhouse Pawns, can (except for the Goldgeneral) resume theirs by being promoted to Hikari and subsequently returning from capture Kodama.

Board size is reduced compared to the Nearlydouble ones as I judged the increase in strength by adding Xiang Qi moves to half the pieces, though substantial, substantially less than the Nearlydouble increases. I retain 12 ranks as 12 is a useful number for its divisiblity, but made do with just 11 rather than 13 files. I arranged for each player's two Bishops to start on opposite-colour squares. 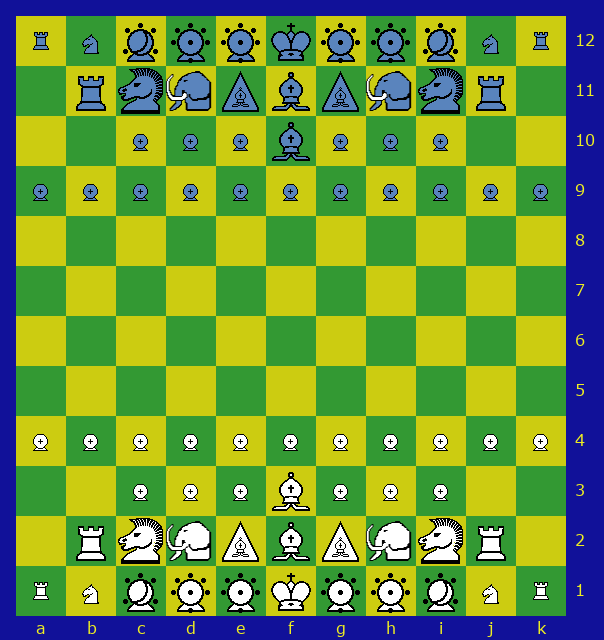 Other pieces exist in two forms:

Any Kodama can be promoted to the corresponding Hikari on entering, moving within, or leaving the four ranks of the enemy camp. If it can move further as a Kodama promotion is optional, if not it is compulsory.

A player can, in place of a normal move, reintroduce a piece captured from the enemy. All pieces return as Kodama pieces.

A player may not have more than two Points on the same file or more than two Bishops on squares of the same colour. Once a Point is promoted to Superpoint or a Bishop to Saint it is no longer counted toward this total and a second unpromoted one can be added.

The boundary between the sixth and seventh ranks is a River that Silverfearfuls can cross only by a single step. This reflects the elephantine nature of their extra, longer move. Points are unaffected by it as they are still behaving only as Shogi Points until they reach the enemy camp.

(1) The reason for the shorter-distance service is because the current international service uses far less than the line's maximum capacity. This is in turn because shuttles carrying road vehicles between terminals near Folkestone and Calais also use the tunnel and take up much of its capacity. The shuttles are somewhat contentious as it is hard to see what they do that the pre-existing ferries do not. The rolling stock was built for the peak service, and since this page was first posted the off-peak service has been expanded to make better use of that rolling stock.
(2) The reason for this shorter-distance service is because the Shinkansen lines are the only standard-gauge ones in Japan and narrow-gauge lines are inadequate for even a medium-distance service of reasonable speed.
(3) As in all forms of Sainted Shogi, extra Bishops are represented by the physical Rook piece, and pieces actually moving as Rooks by promoted Wings.
(4) Place names starting in Saint often have it abbreviated to St., but still listed alphabetically as if written in full - before Salcombe, Sale, and Salford, for example. The abbreviation is usually unstressed, and the pronunciation in that state represented as "sunt". However before certain consonants, particularly in London, it can undergo assimilation, a change of consonant(s) to be more like neighbouring, usually following, ones. Thus it becomes "sunk" before the likes of Catherine, Christopher, and Gregory and "sump" before the likes of Basil, Bernard(ette), Mark, Mary, Matthew (or "Maffew" if the assimilation goes both ways), Pancras, Paul, and Peter.
(5) The rural area east of this conurbation is a rich source of historic British Chess variants: Duke of Rutland's Chess, Lincoln Circular Chess, and Welbeck Kriegspiel.