This page is written by the game's inventor, Mariano Moran.

This game was formerly known as The RoyalChess. To avoid confusion is now called the Olden-RoyalChess. This game is not the same as "Royal Chess", which has elephants and is an 8x10 game, this is another one; this is a variant of Classical Chess.

It's a 12x12 Chess Variant made by Mariano Moran in October 2013, this is an original variant, only taking reference of a single piece of Capablanca's chess.

The starting setup is shown below. 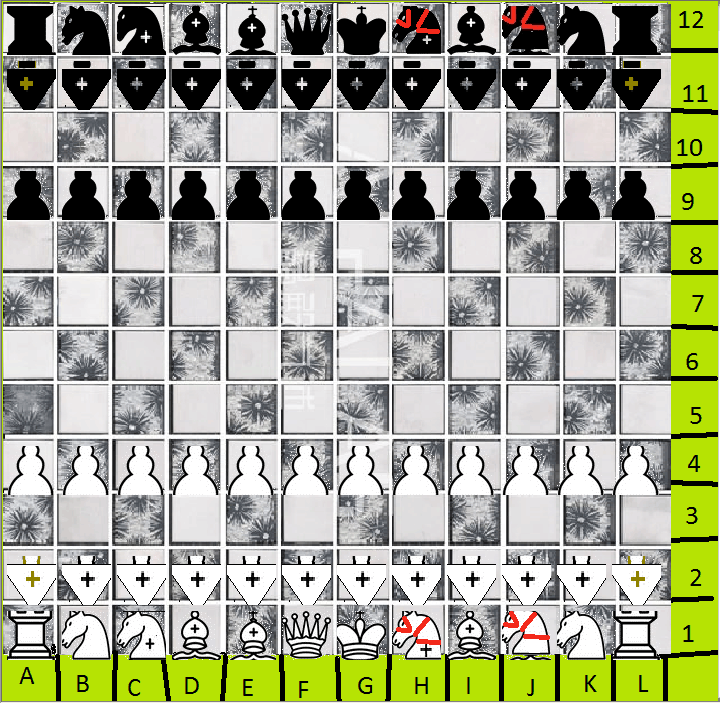 One good thing about this variant is that it's not as complicated as other variants, nor difficult to understand plus well programmed (zrf file)

This variant includes 7(2 types of Squires) new pieces+ new rules
Squire(Escudero) A kind of Pawn, this can promote to all pieces(Not King, nor any kind of Pawn)+Tower

GoldenSquire(GranEscudero) A kind of Pawn, this can promote to all pieces (Not King, nor any kind of Pawn)+Tower+Emperor

1-The same as in Classical Chess
2-The only one that varies is the castling; instead of 2 and 3 squares it castles 4 and 5.
3-The Squire moves like a Pawn,but varies on its initial movement (3 squares) and it can normally go forward from 1-2 squares.
4-Promoting depends on the piece
a) Pawn (normal pieces)
b) Squire(all pieces+tower)
c) Corner/Golden Squire(all pieces+tower+emperor)

This game is in Spanish and in English, this game is for Zillions of Games (zrf file)