In my Unidirectional version of Xiang Qi, with both armies starting the same side of the River, I suggested thinking of the rule lifting blockability of Fortress squares as reflecting a multi-storey Fortress and remarked that that had given me aother idea. Here is that idea: Xiang Qi (XQ) with the Fortress extended one level up and one down in a 3d-Chess sense. The enlarged Fortress also of course echoes Tardis Taijitu, although I don't use that variant's feature of making the Fortress mobile.

As just letting the pieces extrapolate their existing moves to the extra planes within the Fortress seemed dull, I decided to give them additional triaxial moves within the Fortress, with the restriction that any step changing level must happen entirely within the Fortress and not be into/out of it. This gives echoes of my Fortified-piece Xiang Qi, but without affecting how pieces move on the original board.

The name is of course a pun on "Qi" (Chinese-style game) and "cube" (describing the shape of one of the Chinese-style features, the Fortress). I rejected a piece name before Qi as the pieces are 2d+3d compounds and so have rather convoluted names.

For the array diagram I considered knife-and-fork double piece images Ã  la Crossover-piece dual-direction variants, and a single image with movement diagrams, but as both would be too complex I eventually settled on Ascii Art with names of enhanced pieces abbreviated to a generous five letters. This represents either half of the board as viewed by that player. River and Fortress markings are hopefully self-evident! Files l-n (l for lower, and all consonants that can be syllabic) are below, and u-w (u for upper, and derived from single letter in very early Latin) above, the central files c-e. 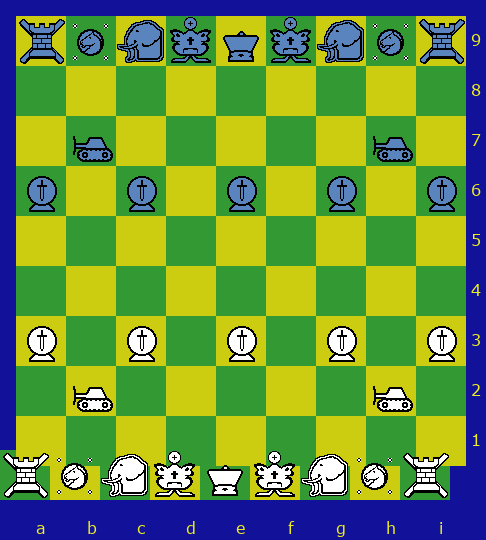 There is no initial double move, En Passant, or Castling, as XQ has none of these.

Like XQ Generals, Granddukes cannot share file d, e, or f without an intervening piece, but can share any of files l-n or u-w as those files have gaps between the Fortresses.