Prime Ministers Contemporary Random Chess (PM-CRC), is a variation closely related to Contemporary Random Chess, played on a standard 8x8 board with a Prime Minister (Bishop + Knight) instead of a Queen in the initial random setup. In PM-CRC when a player first moves a piece from its original square, that player has the option of dropping a Queen on the vacated square as part of the player's move, Ã  la Seirawan.

All pieces (minus the Queen) are randomly placed in the playerâ€™s first rank, with the only restriction that the King must be between the two rooks. It is possible for both Bishops to be on the same color squares (dark or light squares). The opponentsâ€™ pieces are placed with reverse symmetry (Whiteâ€™s piece at a1 is equivalent to Blackâ€™s h8, Whiteâ€™s b1 to Blackâ€™s g8, Whiteâ€™s c1 to Blackâ€™s f8, Whiteâ€™s d1 to Blackâ€™s e8, and so onâ€¦)

There are 2,520 different legal starting positions in Contemporary Random Chess.

In this example once the Prime Minister first leaves it's starting square, a Queen is dropped in the vacated square. Diagram above the right after 1.e2 e4 2.Mc3(Qd1) 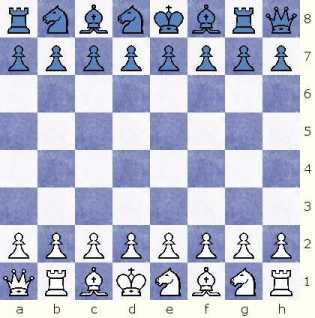 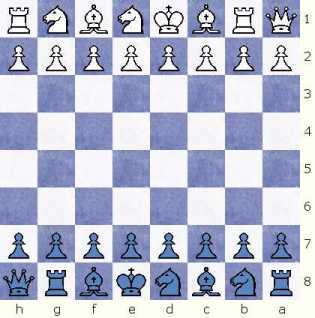 Orthodox Chess rules apply when applicable. Modified Castling rules are below, as well as the new Bishop Adjustment Rule, and the rule about the Queen's drop on the board.

When a player first moves a piece from its original square, that player has the option of placing the Queen on the vacated square, as part of the player's move.

A Queen can not be dropped on the squares vacated by pieces previously moved by the Bishop Adjustment rule, as these pieces are considered to have already left their initial squares.

A player has up to eight opportunities to bring the Queen into play. If a player fails to do so, the unplaced Queen remains out of play.

In PM-CRC, depending on the pre-castling position on the castling King and Rook, the castling manoeuvre is performed by one of these four methods:

Castling the King and Rook will be placed as if the player had castled short in Orthodox Chess, both to either side of the board. There is no long castling (O-O-O) in PM-CRC.

Note that the Bishop Adjustment rule has the following consequences in PM-CRC: