This variant is part of the Tunnelchess family of 3d variants. As regards radial linepieces its Emperor, Empress, 4 Unicorns, and 2 aside of every other compound compromises between the Simple variant with 4 of each simple piece and 1 of each compound, the Intermediate variant with no simple ones but twice the compounds of this one, and the Pawnless variant with twice everything except Unicorns. As with Simple and Intermediate it concentrates these pieces on the first rank. The second rank is filled with Coheirs (of which more below) in PAIRED-LINEPIECE TUNNELCHESS, with pairs of simple and compound 2:m:n leapers along with curved-path pieces in PAIRED-EVERYTHING TUNNELCHESS, and with pieces changing between the two in ORDERS-OF-KNIGHTHOOD TUNNELCHESS. I considered adding these to the main Tunnelchess page but eventually decided against this. Reasons include:
1 losing the link between Tunnel/Wall/Frame files of the Tunnelchess board and central/intermediate/edge files of the FIDE board as carrying every-radial compounds/minor pieces/Rooks;
2 the multiplicity of subvariants;
3 PLTC's distinctive second-rank pieces and PETC's distinctive compound 2:m:n leapers, which are not found on the standard Tunnelchess page but are found together in Ecutunnel and Ecumillstone and now also in Nichtschach;
4 the backlog of posting by editors at the time of invention.

Files are lettered a-d on the top level, e-h on the next, i-l on the next, and m-p on the bottom one. The Frame comprises files a/d/m/p, the Wall b/c/e/h/i/l/n/o, and the Tunnel f/g/j/k. Ranks are 4x4 supersquares of cells, numbered from 1 at the White end to 8 at the Black end. 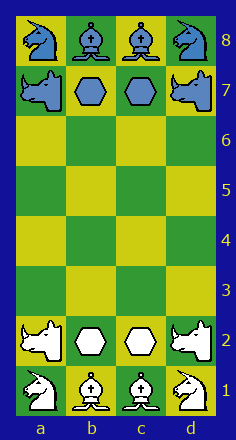 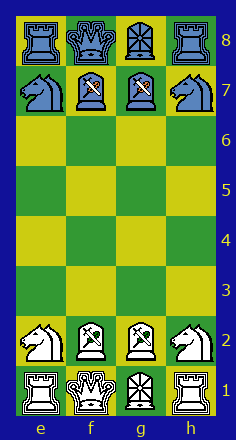 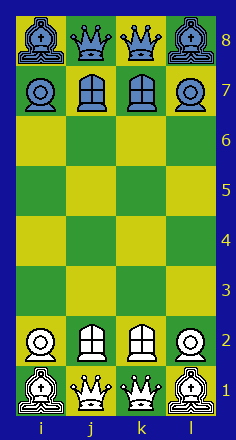 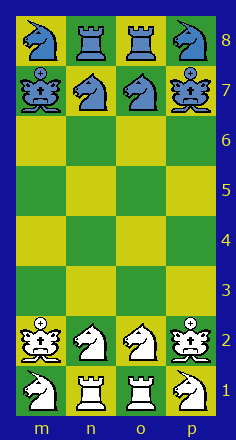 PAIRED-LINEPIECE TUNNELCHESS differs in having a Coheir on every cell of ranks 2 and 7. ORDERS-OF-KNIGHTHOOD TUNNELCHESS replaces these with Garters on the Frame and Tunnel, Thistles in front of the Duchesses and Governors, and Patricians in front of the Bishops and Rooks.

First rank Second rank In PLTC, Forward-only
The COHEIR is a restricted version of the Heir, which is the forward-only form of the Baron and moves one step forward (away from its own camp) Bishopwise or Unicornwise. Whereas the Heir need only switch to a different file when it moves, the Coheir must switch to a differnt kind of file. It cannot switch between two Tunnel or two Wall files. Thus the b2 (White) Coheir can make its first move to a3, f3, or g3, but not c3 or e3; the f5 (Black) Coheir can move to a4, b4, c4, e4, or i4 but not g4, j4, or k4. This is a compromise between the full Heir and a divergent piece, and specific to Tunnelchess geometry. If the idea is popular I may make it the standard Tunnelchess front-rank piece.