Discussions about piece names in Daniil Frolov's Korean Carrera resulted in my questioning my use of Marshhopper for the compound of any Cannon (Chinese or Korean) with any Knight (leaping or stepping). Feeling challenged to devise a better name I settled on Marksman, but postponed launching the rename until I had better names for similar compounds. The full list is now in my piece article Man and Beast 08: Diverse Directions. The four simplest square-board ones will also be seen in the page for my 3d variant Ecumenical Eurasian Ninjachess once the update that I submitted last month has been posted..

Having devised names for the pieces I wondered about using them more widely. An obvious starting point was to build on Fergus Duniho's Yang Qi. There were many ways to do that. One might be to combine Yang Qi with another Duniho idea, the piece merging of Fusion Chess, but I'm not sure how well that would work with the smaller-than-FIDE initial piece density. It might work better on only 9 ranks. Another idea might be Yang Qi but with promotion to compound pieces. In all cases I would bar Rook+Cannon and Bishop+Arrow compounds. I welcome Dr. Duniho's thoughts on such subvariants.

Eventually I devised an Overkill-style variant having two each of the compound pieces from the start and none of the simple ones. As Yang Qi has no compounds of them itself I saw no case for having triple compounds. Adding the King gave 17 symmetric pieces, so I applied a modification of the Nearlydouble principle. A second King would have meant an increase from 11 to 18, so I multiplied 18/11 by Yang Qi's 90 squares and got 147 and a bit. The Nearly bit meant taking the second King back out and shaving something off the 147. Twice-prime 146 was clearly out, and 145 a not-much-better 29 by 5. 144 might look better but I wanted an odd-files board to put the King on a single central file and 9 files by 16 ranks was still not that good. 143 looked a lot better, and I decided on 13 ranks by 11 files, as Yang Qi itself has more ranks than files. 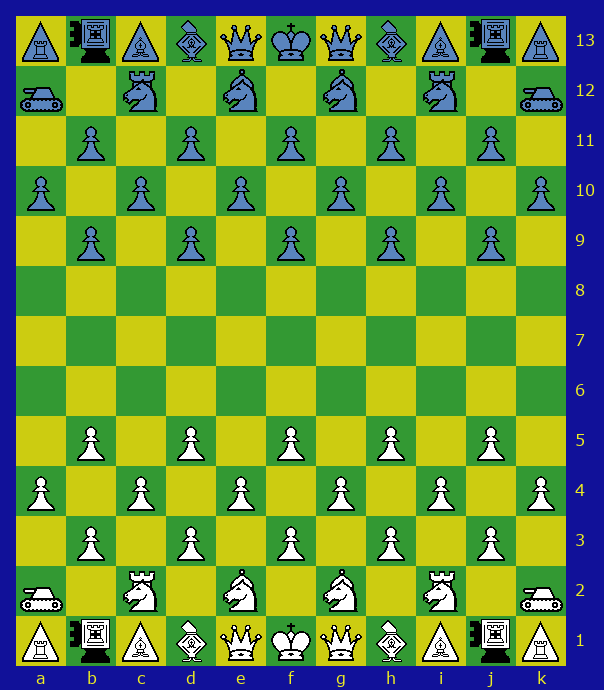 Other symmetric pieces are compounds of two out of the Rook, Bishop, and Knight of FIDE Chess and the Cannon and Arrow differing from the Rook and Bishop in that capturing requires a single intervening piece of either army which survives the move. They are as follows:

Pawns have an optional double-step initial move from their player's third or fourth rank, but not the fifth. They can immediately be captured En Passant by suitably placed enemy Pawns as if they had taken only the first step.

As there is no colourbinding there is no King Swap. In compensation the King can Castle with either Sparrow, both pieces moving three steps. Usual restrictions apply.

A Pawn moving within the enemy camp can be promoted to any stronger piece captured by the enemy. If it reaches the far rank promotion is compulsory, and moving a Pawn to that rank is not allowed if the player has their full complement of symmetric pieces.

Check, Checkmate, and Stalemate are as in Yang Qi.