This page is written by the game's inventor, Daphne Snowmoon.

(The actual shape is here.) 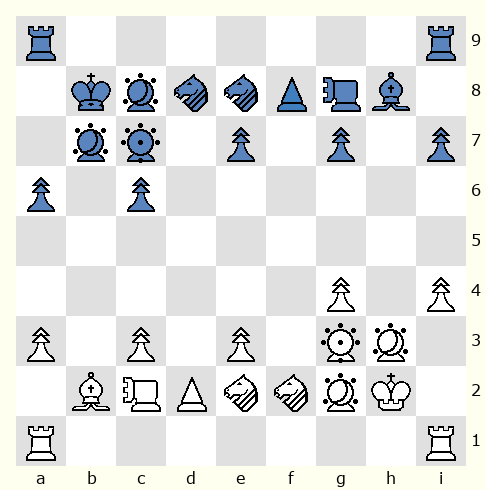 Jade/King (J. Gyoku玉/Ou王): Moves 1 square orthogonally or diagonally. When called without distinction between Jade and King, it is simply called Jade. The first player has a Jade, and the second player has a King. When your Jade has no way of blocking or avoiding the enemy's attack (that is, checkmate), you are defeated.

Incense (I. Kyou香): Moves any number of squares orthogonally - like a Rook in Chess. Promotes to Dragon.

Dragon (+I. Ryuu竜): Promoted Incense. Moves as an Incense or one square diagonally.

Angle (A. Kaku角): Moves any number of squares diagonally - like a Bishop in Chess. Promotes to Horse.

Horse (+A. Uma馬): Promoted Angle. Moves as an Angle or one square orthogonally.

Cannon (N. Hou包): Slides orthogonally, but must hop over a single intervening piece to move or capture - like the Cannon in Korean Chess. Promotes to Iron.

Iron (+N. Tetsu鉄): Promoted Cannon. Moves as a Cannon or as a Van. Thus, it can slide orthogonally without capturing, or can hop over a piece to continue moving or to capture.

Van (V. Zen前): Slides orthogonally when not capturing, but must hop over a single piece to capture - like the Cannon in Chinese Chess. Promotes to Copper.

Copper (+V. Dou銅): Promoted Van. Moves as a Cannon or as a Van. Thus, it can slide orthogonally without capturing, or can hop over a piece to continue moving or to capture.

Cassia (C. Kei桂): Moves one square orthogonally and then one square further diagonally, but cannot move if blocked at the first square. Like the Horse in Korean Chess. Promotes to Scepter.

Pawn (P. Hu步): Moves one square orthogonally forward or sideways - like the Pawn in Korean Chess. Promotes to Gilding.

2. When a Promoted piece is captured, its promotion disappears.

3. Unlike Shogi, Pawn(步), Incense(香), and Cassia(桂) can choose whether or not to promote even when they reach the end of enemy camp.

2. The piece cannot be promoted as soon as it is dropped to the enemy camp. a dropped piece must move after it is dropped so that you can choose whether to promote it or not.

3. Unlike Shogi, Pawn(步), Incense(香) and Cassia(桂) can be dropped at the end of enemy camp. because they can go not only forward, but also sidewards or backward.

4. Unlike Shogi, You can drop a pawn to call check or checkmate.

Jitai(﻿持態) is a situation in which it is difficult to determine who wins or loses anymore because the jade and pieces of both players have penetrated a lot into the enemy camp. When Jitai occurs, Cannon, Van, Incense, and Angle are counted as 5 points and the remaining pieces are counted as 1 point each. When becoming Jitai, the player with a total score of less than 31 loses. If both players have at least 31 points the game is a draw. if a player's score is 39 or higher, the player with 39 or higher wins.

- Jitai's occurrence conditions are based on two things:
First, When 8 or more pieces(excluding Jade) of both players are in each other's enemy camp
Second, When Jade from both players enters the enemy camp

- Jitai only counts pieces in the enemy line and pieces that are captured.

- If a draw is made due to Sennichite, Jitai, or other reasons, the match is played again by swapping first player and second player.

Other rules are same as Shogi.

The arrangement of the pieces referred to Old Sittuyin.