This variant is intended to complement Vernon Parton's Neutral King Chess. The idea is that each player's King and Queen are initially their own, but the rest of the FIDE set are initially neutral. The reason why Queens are not neutral is due to how players recruit neutrals for their own army, which is also why the Pawns are differently positioned. 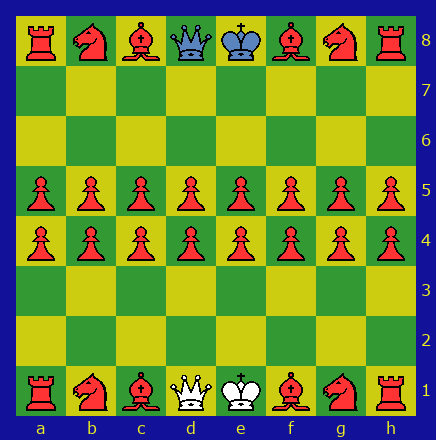 As FIDE Chess, with "forward" for Pawns interpreted as away from the player moving them.

Neutral pieces may not capture each other. As will soon be seen, the question of neutral pieces capturing or checking recruited pieces never arises.

At the end of the move a player recruits as their own any neutral piece A that would be threatening a recruited piece B were it already of the opposite colour to piece B. If piece B is one of the player's own this nullifies the threat, so that enemy cannot immediately capture it. If piece B is an enemy one it confirms the threat, so that the enemy must move piece B or if possible capture piece A to avoid losing piece B. If piece B is the enemy King it is in Check. If another neutral piece C threatens piece A, the player recruits piece C in turn, and so on until there are no neutral pieces threatening recruited pieces.

Castling is allowed through squares threatened by neutrals as it ultimately recruits them. Note that the Rook will necessarily already have been recruited either because of the lack of intervening pieces or previously. Castling to escape check, and therefore with a Rook recruited by the enemy, is not allowed. The notes include an example of such recruitment.

A player moving a Pawn to their own seventh rank also recruits it as their own. This serves to both stop the Double Move and En Passant questions arising and increase the chances of promotion. The bar on two successive opposite-player moves by neutral pieces also helps with this. A Pawn reaching an end rank is promoted as in FIDE Chess.

Piece allegience could be indicated with Draughts pieces underneath, or by using a highly directionalised novelty set with neutral pieces facing sideways. It is the latter option that qualifies this as a "usual equipment" variant.

The rules for neutral pieces could also be used for pieces left by a checkmated player in subvariants of multiplayer variants.