This page follows on from Mitred Framing 1. Although the board size is the same as that previous page, it is worth having a separate page as the "mitring" process is slightly modified.

This time the starting place is 9-file variants - though again only those already having Bishops in them. The pieces from all but the centre file are then arranged on a FIDE board, usually bringing the two camps closer together. An extra row is added around the new board, and FO versions of the outer pieces again placed diagonally out from them rather than directly behind. The middle cells of the end ranks are then filled in by a restored King - or in the Notchess case Cardinal - either alongside a Prince or as part of the Mitregi set of generals. Pawn ranks are again filled out at either end.

Interestingly the numbers and diversity of pieces in the variants mean that Xiang Qi sets - a 9-file game itself - are more useful representations than 8-file FIDE sets.

The next page in this series puts a rim round 6x6 variants to gfive 8x8 ones.

All these variants have an intimate connection between how pieces are represented and how they are promoted. In particular, only pieces represented by Shogi pieces are promotable and only those and Silvers represented by Xiang Qi Points (which are in sufficient supply to represent with a switch of opposite-coloured ones) can return from capture. For this reason unpromoted Shogi Bishops/Points represent Pawns, and unpromoted Silvers Mitres. Unless otherwise stated other Shogi pieces and Cannons represent themselves, and other Xiang Qi pieces their FIDE counterparts. I have not managed to devise Mitregi or Frontofhouse versions of any of these as the number of distinguishable piece types using two Shogi sets is not sufficient. 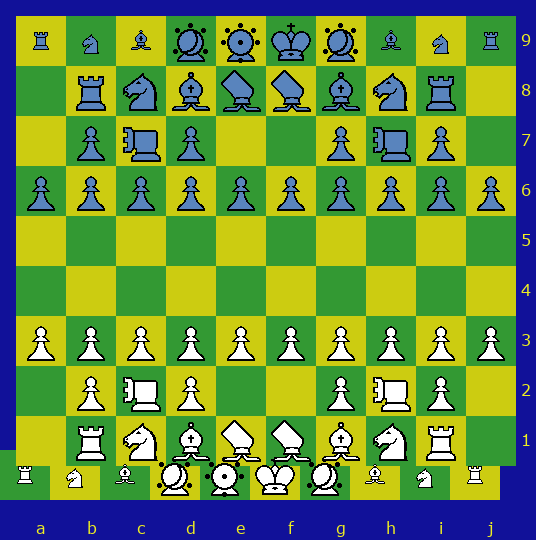 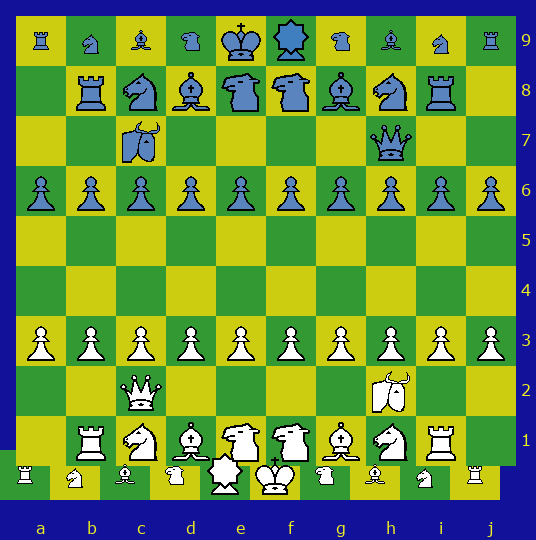 MITRED KNIGHTED-PIECE NOTCHESS uses one Xiang Qi and one Shogi set minus the Shogi King/Rook. A Ferz represents the Queen, a Cannon the Marshal, the General the Cardinal, and XQ Points array Silvers. 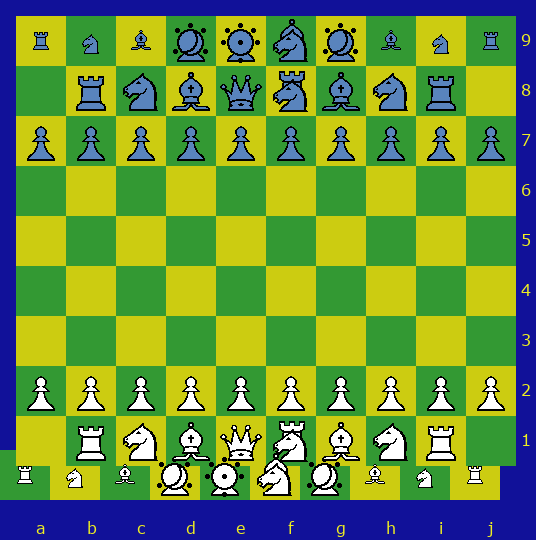 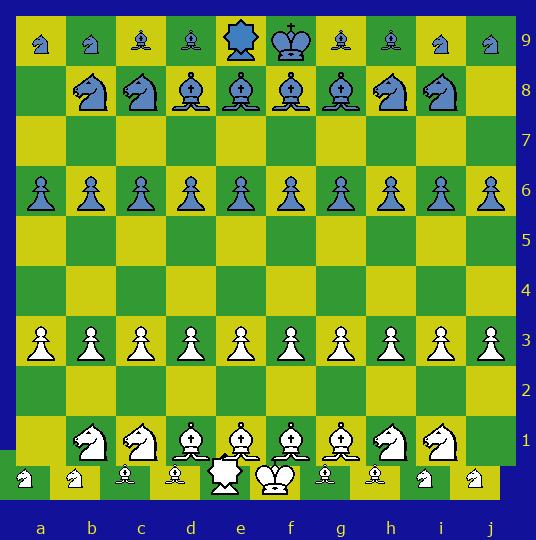 Pieces are listed by my preferred English name for them, with an actual or suggested Japanese name and its translation in brackets. Pieces returning as a lesser piece can be promoted back to their array piece type, and promotees always return unpromoted.

Pawns have an initial double-step move from anywhere on their player's first three ranks, and can immediately be captured En Passant by any enemy Pawn that could have captured them normally had they moved only the single step.

Castling involves the King moving 3 steps sideways and the Rook to move to be adjacent to the King on the inner side. With the King and Rooks starting on different ranks restrictions are loosened to those in Ecumenical Chess - that the King has not left the middle two files, the Rook involved has not left its own and the adjacent file, neither has left the back two ranks, and both are on the same rank.

Check, Checkmate, and Stalemate are as in FIDE Chess, except in Mitred Knighted-piece Notchess. The latter variant has victory by capturing all of any of the following groups (including those promoted to other pieces):
* Rooks, Wings, Queens, Marshals;
* Bishops, Mitres, Queens, Cardinals;
* Knights, Helms, Marshals, Cardinals.