It is fitting that my first variant after a completing a complex series of 4-player 3d variants should return to minimalism. This variant is clearly inspired by Minishogi, which has one aside of each of most Shogi pieces on a board of just over half each dimension of the Shogi one. The exceptions are the Rook and Bishop, strong pieces of which the original game had only one aside. This variant does much the same with Xiang Qi, but at a third of the original the board is a rather larger proportion than Minishogi's. As all capturable pieces run to two or more aside in Xiang Qi, I retain every piece type (but still only one aside).

Since posting the first version of this variant I have been informed that I made an error regarding extrapolation from Minishogi. I was inclined to correct the error, but as the first version has since been implemented I decided instead to add a closer-to-Minishogi game as a second subvariant. It is not as if the array diagrams take up much space! Pieces and rules are the same in both. I considered also giving the stepping Knight more mobility than in the first, but as it was pointed out below, this would stop the Elephants preventing instant Checkmate. 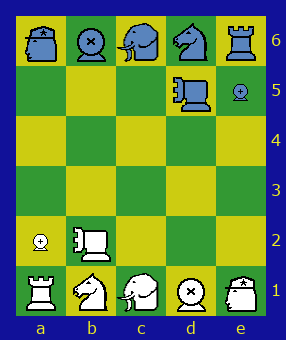 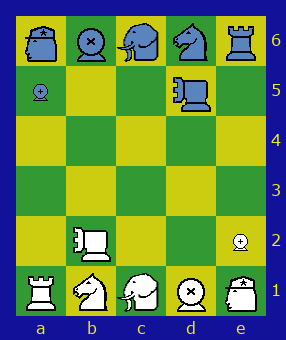 Pieces are the same as in Xiang Qi. Board size however restricts long-range pieces to move 5 ranks or 4 files, and so reduces their advantage over short-range ones.

The border between the middle two ranks is a River. The General and Ferz cannot cross it. The Elephant is free to cross it as even unrestricted it has only 4 squares available, a different 4 for each player. On crossing the River the Point acquires the ability to move one square sideways.

The pattern of 7 squares reachable by a Ferz echoes that for an Elephant in full-size Xiang Qi. As in Xiang Qi, the Point starts only two steps from promotion. A difference is that as the two players' Cannons do not start on the same file nothing starts En Prise to them.