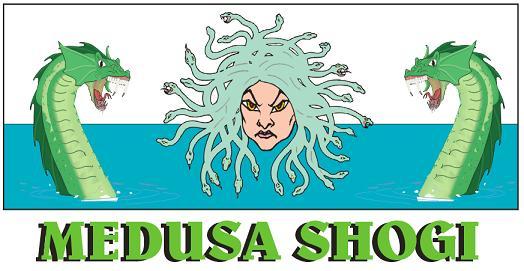 (c) Jan 2006 by Gary K. Gifford Medusa Shogi is played on an 11 x 11 board and contains the full piece set of my Pillars of Medusa, from which the game is derived. My original Pillars of Medusa is also played on an 11 x 11 board and is based on Turkish Great Chess. I thought of Medusa Shogi after reading a game comment by L. L. Smith in which he suggested that the pawns be moved to the fourth ranks and that the right and left-hand setups be relatively the same for each player, thus for example, each playerâ€™s Queen will be his left. This is not the case in Pillars of Medusa. After relocating all pawns to the fourth rank I modified the L.L. Smith setup idea by shifting the pieces up a rank, with exception of the King, Queen, Serpent, and Rooks. This setup is a bit like that found in the first ranks of Freelingâ€™s Grand Chess. 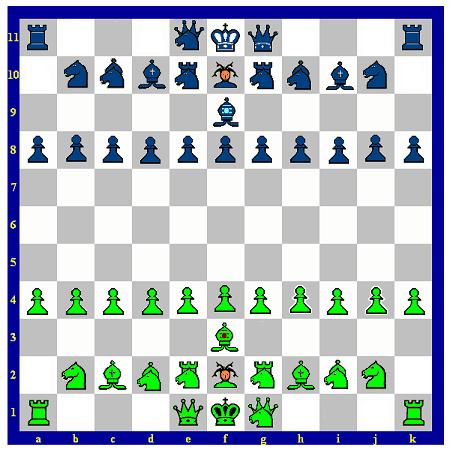 This is the initial setup.

As in Turkish Great Chess with additional Morph and Medusa discussed below.

Note: In Medusa Shogi, the Medusa is a little different than the one seen in Pillars of Medusa and in Mini-POM. Morph captures of Morphs is also different. Both issues are discussed below.

How the Pawns, Medusas, and Morphs Move Note: Only pawns can promote. Castling: Medusa Shogi allows for a player to castle to his left or right, with the same mechanics as in western chess; but with a choice of castling options. a) Move your King 1, 2, 3, or 4 spaces towards the Rook on the desired side. b) Place that Rook on the square next to the King, and toward the center. Thus The left Rook would go just to the King's right; or if castling to the right, that Rook would go just to the King's left. Note that you can castle right by an enemy Medusa on your second rank, but would be imobilized at the end of castling if the King or Rook or both were adjacent to the Medusa, as applicable. Note that a King can move 1 square left or right without castling. Pawns Pawns move and capture as do Western Chess-pawns; with the following exceptions: (a) these pawns are limited to an initial move of 1 space. (b) there is no "pawn en passant," (c) Pawns can only promote to a Medusa. For Shogi-drop purposes: 1) unlike in Shogi, you can have more than one of your pawns on the same file. 2) A pawn can be dropped on any free space that is not in the last rank. 3) A pawn moving to the 9th rank or 10th rank (relative to you) can promote to a Medusa. 4) A pawn moving to the 11th rank must promote to a Medusa. 5) A pawn never promotes on the move in which it is dropped. 6) A Morph-Pawn must promote to a Morph-Medusa* *Since Medusas cannot capture, the morph aspect is only relevant when the Medusa is captured, resulting in a Morph-Pawn in-hand. Medusa The Medusa in this game moves like a standard chess King. This Medusa can make no captures and cannot deliver check or checkmate. What it does do is "turn adjacent-square enemy pieces, King, and pawns to stone." When the Medusa moves, such that petrified pieces (or pawns) are no longer adjacent to her, those pieces (or pawns) are once again free to move. It should also be noted that pieces are capable of traveling through spaces adjacent to Medusas [without turning to stone] as long as they donâ€™t end their movement on such a space; if so they would then turn to stone on that space. A Medusa cannot turn the opponentâ€™s Medusa to stone. All Medusas, when captured, turn into pawns the color of the capturing piece. They are removed from the board and placed in-hand for the player who made the capture to later drop. You will never see a Medusa in-hand, but you may see a lot of pawns, each which can later become a Medusa. If a Morph captures a Medusa, it can Morph into the Medusa and have immediate affect. Whether the Morph transforms or not, a Pawn would be placed in-hand. More about Morphs: Some have been confused by the Morph -- for example, thinking that it absorbs the piece it captures. But this is not the case. The Morph captures by displacement, just like its non-Morph counter part. It can then change its form into that of the piece just captured, but is not required to do so. In either case, the captured piece changes color and becomes part of your â€œin-handâ€ set, ready to drop. If a Morph captures a Medusa, the captured Medusa changes to a Pawn of your color, and goes in hand. If the captured Medusa was a Morph-Medusa, you will have a Morph-Pawn in-hand. If the Morph captures another Morph, you get to add that captured Morph (in your color) to your hand. This is true whether you decide to transform your Morph or not. (Also see â€œMorphs in non -Shogi Medusa gamesâ€). Morph-related examples follow: 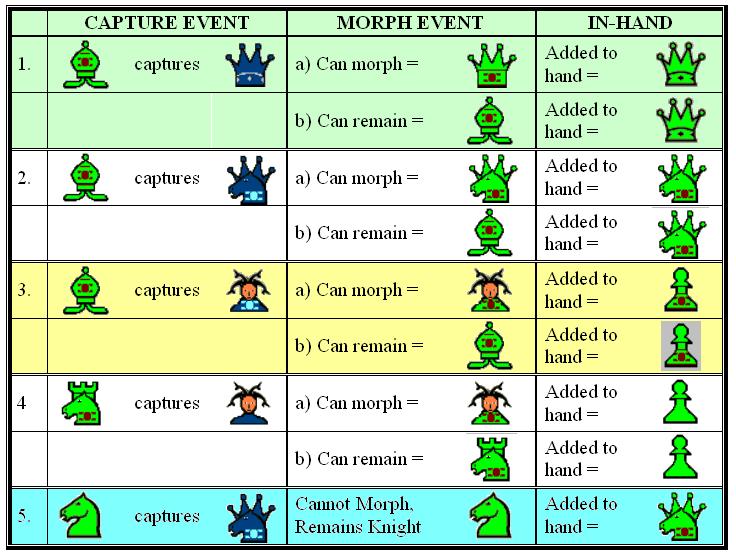 Other Issues: A piece "in-hand" can be dropped on any vacant square, even if this is instant checkmate. A captured Morph remains a Morph; thus it is a Morph when you drop it. A frozen piece can be captured by a piece, pawn or King of enemy color. The piece, when in-hand, can then be dropped as an active {unfrozen } piece.

1.Why canâ€™t one Medusa turn another to stone?

Answer: Game testing indicated that Medusa immunity (from each otherâ€™s stares) provided for a much better game than would result from the Medusaâ€™s turning each other to stone. Also, from a mythological stand point, Medusa had two sistersâ€¦ they saw each other without turning to stone (mythological speaking, of course).

2.If I move a piece such that it travels next to a Medusa, but is intended to move past it, does the piece turn to stone when it is one square from the Medusa? Or can it move right on by, unaffected?

Answer: The piece moves by, unaffected.

When using the pre-set, how can I keep track of the Morphs?

Answer: The piece set includes images with the little Morph designator (like the ones seen on the Morph Bishops).

4. Why is it that the Medusas in this game only move 1 space at a time, but in your other games they move up to 3? Also, why can't these Medusas capture pieces?

Answer: My origininal rules to this game did have the Medusas moving 3 spaces, making captures, and retaining their Medusa form when captured. However,after further thought, such Medusas seem far too powerful for this Shogi variant. As suggested by Michael Howe, I therefore decided that captured Medusas would be lowered to pawn status. Since there is also a lot of power in the game, plus the Shogi-drops, a Medusa that can move only one space but "turn pieces to stone" without the ability to capture seems appropriate. We could end up with several slow moving Medusas and several stone islands. Remember that when a Medusa is no longer adjacent to a piece (or pawn, or King) that previously frozen unit is free to move again.

In my other POM games the Morph aspect disappears if a Morph captures another Morph and makes the transformation. The only reason this was the case is that I made a wooden disk set of Pillars of Medusa. Each piece had a â€œflip-side.â€ So, for example, the flip-side of a â€œWhite-Knightâ€ would be a â€œBlack Morph-Knight.â€ This was very convenient for over-the-board play as when you captured a piece with a Morph and wanted to make the transformation, you simply flipped the captured piece and you had the new Morph in your correct color. This meant that when a Morph captured another Morph, the flip-side of the piece was not a Morph when the transformation was made. With computer versions of POM, and Shogi Medusa, the Morph-negation of convenience is no longer needed. See Pillars of Medusa for more information.

A special thanks to:

- Corel Draw, which was used to make the title graphic.

- Michael Howe for his concern over of the power issues and suggesting that captured Medusas revert to pawn status. This recommendation was incorporated into the game.

A link to the first Medusa Shogi pre-set follows. The pre-set has no piece holding zone. Players will have to keep track of captured pieces. Eventually a holding zone set should exist.