This variant is a simple spinoff from Chatukanga, one of my Chaturanga variants. That game took its name from its replacing the Ferz with one each of the compounds of two paired pieces, one of which Timothy Newton had previously named Kangaroo. The pieces were rather cramped on an 8x8 board, although the cramping is probably less of a problem for such pieces than it would be for the modern Bishop and its compounds. I wondered how they would perform on a 10x10 board, judging that as Elephant compounds were unbound their strength would be more than the sum of their components. I based the array on Grand Chess and its offshoots as the name of this variant could be seen as a translation of Grand Chess. 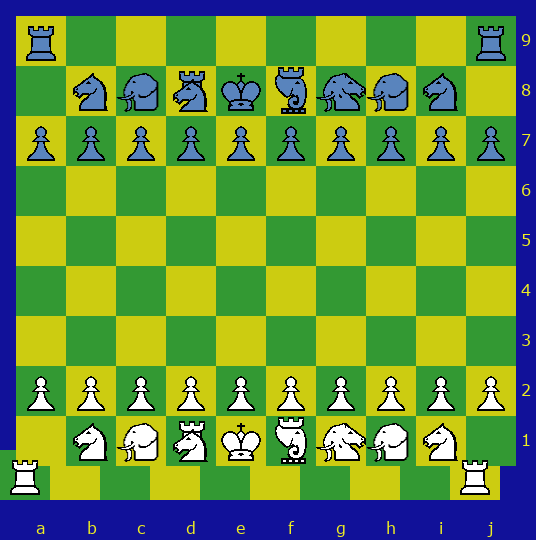 As Castling, the initial double-step move, and En Passant did not exist at the time of Chaturanga nor does this variant have them.

A Pawn reaching the far rank is promoted to Infanta, Marshal, or Kangaroo. The ban on underpromotion is to maximise overall army strength as Pawns get promoted. Pawns promoted on the middle 4 files can become any of the three pieces, but Pawns promoted on other files must be promoted to a compound of the piece type whose starting file it is.

Bare King, Check, Checkmate, and Stalemate are as in Chaturanga.