This page is written by the game's inventor, David Paulowich.

The game of Jetan or Martian Chess has fascinated me for years and inspired this variant with 8 Pawns and 12 other pieces on each side. While the Knights now have a longer journey to the central squares, they also have the option of leaping to the player's fourth rank on their first move. 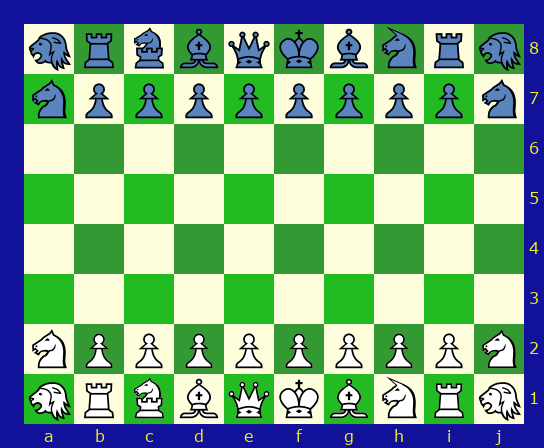 With exceptions noted below, all usual Chess pieces are the same as in Chess. Additional pieces are described below.

The Unicorn moves as a Bishop or a Nightrider. A Nightrider can make consecutive Knight moves in the same direction, until it makes a capture, is blocked by another of the player's own pieces, or has gone as far as the board will let it. The Nightrider move can be blocked only on the spaces it would land on with a Knight move. Any of its Knight moves can leap over pieces as a Knight would.

The Chancellor moves as a Knight or a Rook. Placing Chancellors and Queens in the corners (with the Pawns in front of them also defended by Knights) is an opening setup I have used on 64, 80, and 100 squares.

The Lion is Ralph Betza's "Half-Duck" (HFD, a piece that can move one square diagonally or jump two or three squares orthogonally), from the Remarkable Rookies army. I chose the name Lion as a reminder of the Lion in Grande Acedrex (a 3-square leaper, according to some accounts). That game also has a piece called the Unicorn (or Rhinoceros).

The King moves as the King in Chess. It castles by moving two spaces toward the Rook, with the Rook moving to the space the King passed over. The usual castling restrictions from Chess apply.

Any Pawn may make a double move from the square it started on. Whenever a double move take a Pawn to a space horizontally adjacent to an enemy Pawn, the enemy Pawn may take it "en passant" on the next turn. On reaching the last rank, a Pawn promotes to a Chancellor, Queen, or Unicorn of the same color, but not to any lesser piece.

Most of the rules are covered under the piece descriptions. Checkmate is a win and stalemate is a draw, as usual.

Can a chess variant be too exciting? With all the power of Unicorn Great Chess compressed down to 80 squares, sharp tactical play is to be expected. Some of the test games I ran on Zillions ended in draws by perpetual check, which is another consequence of adding 4 powerful leapers to the 16 standard pieces of chess. This variant represents my ultimate "unicorn game". Lately I have been busy playing (and designing) Shatranj variants with much weaker pieces.

Play Online: Lions and Unicorns Chess can be played on this site with Game Courier. Fully automated, rule-enforcing presets for this game can be found here. You can also view games that have previously been played on Game Courier here.