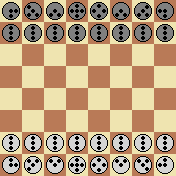 'Pawn': These have two directions (hereafter 'pips' for brevity) 180° apart. As a consequence of the rules (see below, likewise for all other pieces), the pawns are generally incapable of long-range captures, and serve the primary purpose of defending or obstructing specific squares. Each player has 8 pawns filling either the 2nd or 7th rank, with pips initially pointing forward.

'Wedge': These have two pips at a 90° angle. This allows long-range capturing by making a long-range move in one direction followed by an adjacent capture in the other direction. It also allows short-range double-captures. Each Player has 4 of these. 2 adjacent to the king and queen, with the pips initially in the two diagonally forward directions, and 2 in the corners, with one pip directly forward and the other toward the center of the board.

4. A piece may rotate to a new orientation if it meets at least one of the following criteria:
a. No captures have been performed during the turn.
b. Every available pip has been used during the turn.
Rotation may only be performed as the final action of the turn. A valid orientation is one in which all pips are pointed in one of the 8 standard queen-like directions. A rotation which leaves the same combination of directions available to the piece is not a valid action (example, rotating the pawn 180°).

Again, all pieces but the king follow the same rules, and are distinguished only by their available pips. The only difference with the king is that action 1, moving without capturing, is limited to a single step rather than sliding as far as desired. However, through jumps or captures, it's not uncommon for the king to be able to move more than one square in a single turn. If the king passes through check, that is permissible, as long as he is not in check at the end of the turn. 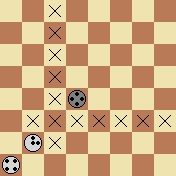