This variant is named after the river Irwell, a northern tributary of the more famous Mersey in Greater Manchester. Among my series of River+university+cathedral variants, it is the first to be set so far north.

Because it is based on two full-sized cities (Manchester and Salford) a strong influence is Avon, particularly on the size and shape of its board and teams. As the city centres adjoin across the river, however, rather than being on distinct stretches of river separated by suburbia as Avon's Bath and Bristol are, there is unrestricted movement between files in camp, and rather than having four groups of pieces in corners, pieces of one colour in a camp flank those of the other. These factors make moving pieces within camp hard without a net loss of material. The tendency will rather be to move Pawns out first and other pieces in their wake. This claustrophobic feeling within camp suitably evokes the heart of the most populous and centrally placed of the four South Pennine metropolitan areas. Another of the four has since become the setting for a later variant in the same family, Aire.

The City of Manchester was relatively straightforward to represent as it has the usual features (my father was a graduate of its university), but Salford was tougher. It too has a university but no Anglican cathedral, and while it has a Catholic one those are beyond the scope of this family of variants, which are after all an offshoot of Anglis Qi. I then wondered about alluding to Salford's associations with the soap opera Coronation Street. Well, the leading non-royal figure in Coronations is again usually a Bishop, but in The Lord of the Rings, which has also now been dramatised and is an established theme of variants, it is a Steward, so I found a way to combine the two.

I also decided to try and fit a Rose in somewhere. As in Wey this name has Lewis Carroll connection, though from the other end of his life, but it is also a local heraldic emblem. See notes for more detail. 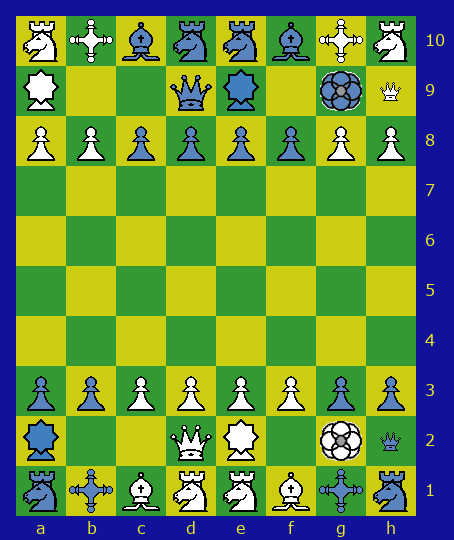 Ranks are numbered 0 to 9, files lettered a-h. The River is between ranks 4 and 5. Note that while one Prince aside is initially En Prise to a Queen and a Rose, it is also doubly protected and will result in an exchange of the Queen and Rose for only a Prince and a Steward.

Players are initially restricted to moves starting or ending their side of the River. Playing order is White 0-4, Black 5-9, White 5-9, Black 0-4.

When a player moves their Rose, it cannot be moved again until that player and, if still in the game, their partner have each moved another piece. This gives time, for example, for the Black 5-9 player to move both d7-d6 and f7-f6 to protect their Queen from a Rose moved to e4.

There is no initial double-step move, En Passant, or Castling. As in Wey (and for the same reason of initial proximity) there is the further restriction that Pawns cannot capture enemy Pawns moving in the same direction - although they can capture each other when crossing the River and can capture other enemy pieces in the usual way. Pawns crossing the River, whether capturing or not, become Stewards.

A player with no legal move (including ending with a royal piece on their half of the board) drops out of the game. All that player's turns are subsequently missed. Their partner, if still in the game, gains total control of the army with the Princess becoming a Queen and any remaining unpromoted Pawns Stewards. This strengthening is some compensation for the army moving only half as often as before. As with Avon the form of partnership is suggestive of the card game Bridge. The game usually ends when both an army's players drop out of the game.

I say usually because of Coronation. A move ending with a Prince the only piece between a Bishop and a Steward along a diagonal, or on the edge with one unblocked diagonal to a Bishop and the other to a Steward, regardless of colour, results in Coronation. The Prince becomes a familiar KING, and must thereafter be kept out of Check. A player cannot end a move with a Coronation of one of their own Princes involving an enemy Bishop or adjacent enemy Steward, as this would be moving into Check. Checkmate and Stalemate then become further ways of a game ending. Theoretically a move can end in two Coronations, of opposite-colour or same-colour Princes. An army both of whose Princes undergo Coronation, either simultaneously or in separate moves, is also defeated as it is judged too unstable with two rival claimants to kingship! Once captured, a Prince cannot undergo Coronation but its absence may cause the army's players other problems.

Irwell is playable using two FIDE sets distinguishable by size, with (large/small) Pawns for Steward/Pawn (as Pawns are promotable to Steward), Bishops for Bishop/Prince, Queens for Queen/Princess, Kings for King/Rose. All Rooks can represent Marshals. No substitution is needed for mass promotions when a player takes control of their entire army, as such promotion is obvious from the partner dropping out.

If the idea of promoting Pawns to Stewards rather than Wazirs proves popular, I may include it in the other variants of this family. Its special powers in this variant are the only thing about it with more connection to the Northern setting than to more southerly ones.

Note that once a player has lost their Queen, Princess, and one Prince (and necessarily, their partner in the process), Coronation of the remaining Prince is irrelevant.

Until the metropolitan areas mentioned (among others) were formed the Irwell and the cities either side were in Lancashire, of which the red rose was a heraldic emblem. The Mersey which it joins was the border between that county and Cheshire, from which Cheshire Cat Chess ultimately takes its name. This relates back to Lewis Carroll's birth and childhood along that border near Warrington, downstream of the Irwell confluence.

Both sides are linked to royal titles. Cheshire and Lancashire originally meant the territories of the Earl of Chester and the Duke of Lancaster. These were originally normal hereditary peerages, but Earl of Chester became a subsidiary title of the heir to the English throne in 1246, and Duke of Lancaster a title of the English sovereign in 1413, which they have remained since. The Steward piece also has royal connotations, although those are Scots ones and this variant is set only halfway from London to Scotland's main conurbations.