Swapping round bits of FIDE piece moves to create Nimrod Chess resulted in one each of the four new pieces, making the pair of Knights rather an anomaly. While one way to resolve this was with Bachelor Nimrod's smaller army and board another would be with larger ones. While still balking at mixing the Knight's move with radial ones, I wondered about mixing it with the Camel move in a larger variant. As I could think of more than two pairs of such pieces I chose the pairs best balancing ease of understanding with strength of movement.

Naturally my jumping-off point was Wildebeest Chess with its neat balance between radial and oblique pieces. I retained its board, army size, total set of moves, and radial/oblique separation. As no resulting piece was colourbound I saw no need to place similar back-rank pieces (no identical ones remained) side by side, and so put radial ones on the first and third files in from each side and oblique ones on the second and fourth, as is more typical of variants with even numbers of files such as my own Reinforcement Ecumenical Chess and Wildeurasian Qi. The middle three files remained the Wildebeest ones as I was retaining their original pieces, the compound ones. The rotational, rather than mirror, symmetry between the armies in the array followed from these files. 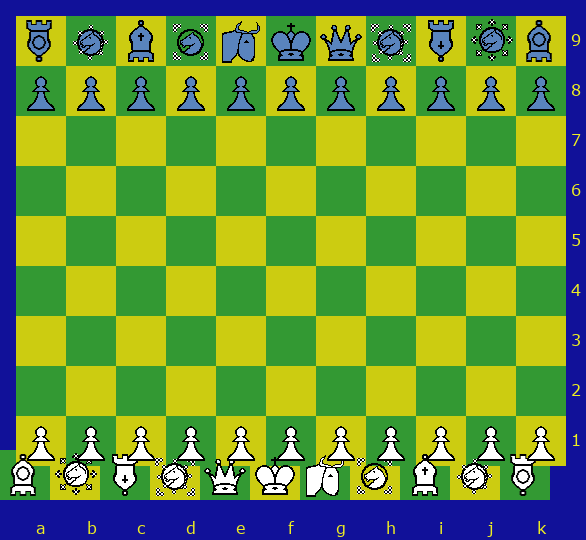 Pawns have same optional initial moves as in Wildebeest itself, complete with En Passant.

The King may Castle with either five-way piece, exactly as with Rooks in Wildebeest itself.

Pawns are promoted to any other capturable array piece type on reaching the far rank.

Pieces can be represented by 11 Pawns used indiscriminately, and 1 of each other piece, from 2 distinguishable FIDE sets, e.g. large King as King and large/small Queen as Queen/Gnu, Rook as Huntress/Hartebeest, inverted Rook as Hawkress/Cohartebeest, Bishop as Hunter/Hinny, Knight as Hawker/Cohinny.

The Co-prefix should be stressed in piece names starting with it. This is mainly to emphasise the difference from the piece without, but partly to make Cohinny sound less like Queen, as the variant has both pieces.

One pair of pieces that I considered but rejected were the Gnuranker, which like the Fibnif has no move exceeding one file left/right, and Gnufiler, which has none exceeding one rank forward/backward. This seemed too limiting on a larger-than-FIDE board, and too far removed from the ranges of the original Knight and Camel.

The name Hinny may raise two questions. Firstly, why bring donkey genes in for a piece mixing some Knight (horse) and some Camel leaps? Well, horses and camels cannot interbreed anyway. Secondly, why not use Mule for the reversed Hinny? Partly because Cohinny does the task perfectly well and partly because Mule would not extrapolate to other pairs of oblique directions. It occurred to me recently that the currently spare Mustang and Mule could be used for one-off pieces with subsets of the Gazelle moves - Zebraranker+Nightfiler and Zreb+Barc respectively. However, there would also need to be distinct names for Nightranker+Zebrafiler and Crab+Berz, as Comustang and Comule would more logically be Zemelranker+Camelfiler and Zrem+Marc. Perhaps Mule should be Nightranker+Zebrafiler. It would also be logical to have four real words to name the pieces with the corresponding subsets of the Bison moves and the same prefixed by Co- the ones with Cobison moves.