This page continues the theme of Horn Rimmed Hex 1 but starting from the smaller board of Compact Hex Chess. As with the first page the first array, a Wellisch-orientation one, doesn't actually have Horns, but to compensate it does have Supersaltires rather than plain Saltires, which would be very weak indeed in the Wellisch orientation, and six aside to boot.

I again relegate Shogi-style generals to be promotees only, rather than include them in some arrays as I did with Mitred Framing. This means that the physical Silvergeneral can be used to represent other pieces, usually Unicorns. The Mitred Framing rule of not promoting trhem further becomes even more important on the hex board, as this page's variants inherit Hex Frontofhouse's promotion based on running out of moves rather than entering a set promotion zone.

The complication of the Unicorn having three bindings as against the Bishop's two means that the basic "inner" array is not always left fully intact. They are all designed for two players, and a three-players version is either impossible or not recommended. All these variants have an intimate connection between how pieces are represented and how they are promoted. Therefore the same array with different physical representations is a different variant, with different promotion rules. In particular, only pieces represented by Shogi pieces are promotable and can return from capture. For this reason unpromoted Shogi Points always represent the relevant Pawn analogue. Unless otherwise stated other standard-hex pieces represent themselves, as do unpromoted Wings.

HORN-RIMMED COMPACT WELLISCH uses Wellisch sets for symmetric pieces, and a mixture of Silvers and Helms from Shogi sets for Supersaltires. HORN-RIMMED COMPACT WELLISCH FRONTOFHOUSE uses only Shogi sets with the King as General and unpromoted/promoted Rooks as Virago/Vicereine, Wings as Wing/Rook, and a mixture of Shogi Bishops and Silvers as Supersaltire/Viceroy. 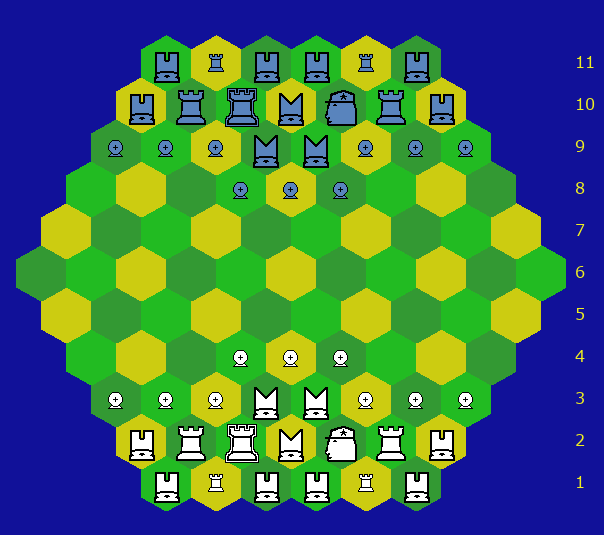 HORN-RIMMED COMPACT REVERGENT uses McCooey sets for symmetric pieces and Helms for Senhelms, and a mixture of Shogi Bishops and Silvers for Horns. HORN-RIMMED COMPACT REVERGENT FRONTOFHOUSE uses only Shogi sets with the King as Grandduke and unpromoted/promoted Rooks as Countess/Duchess, Wings as Wing/Rook, Helms as Senhelm/Sennight, and a mixture of Bishops and Silvers as Horn/Unicorn. 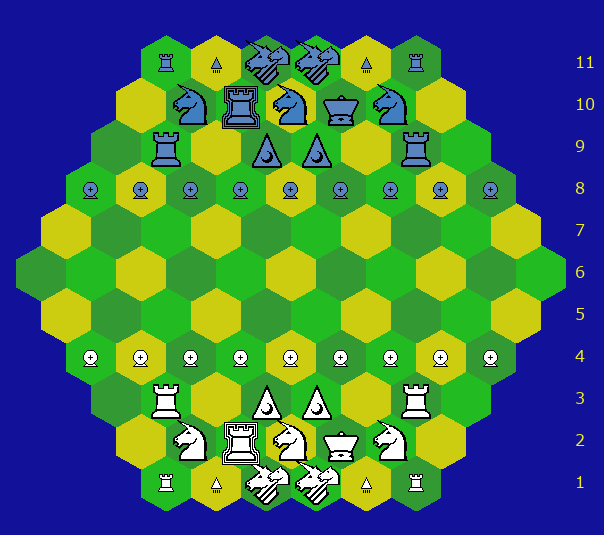 HORN-RIMMED COMPACT MCCOOEY uses McCooey sets for symmetric pieces and Helms for Senhelms, and a mixture of Shogi Bishops and Silvers for Horns. HORN-RIMMED COMPACT MCCOOEY FRONTOFHOUSE uses only Shogi sets with the King as Grandduke and unpromoted/promoted Rooks as Countess/Duchess, Wings as Wing/Rook, Helms as Senhelm/Sennight, and a mixture of Bishops and Silvers as Horn/Unicorn. 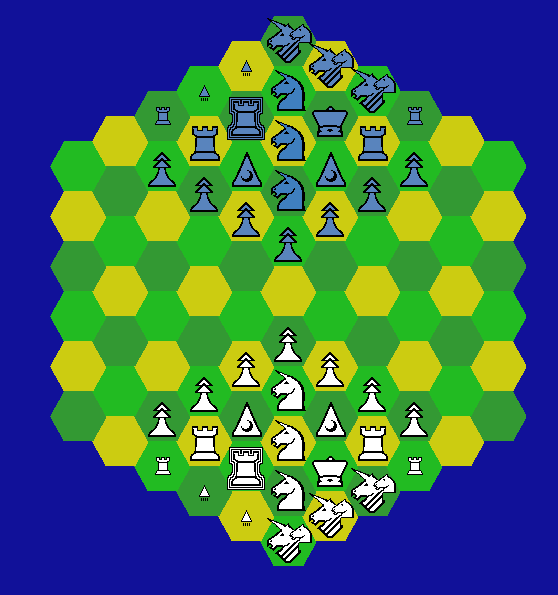 There is no double-step move, En Passant, or Castling

A forward-only piece reaching a cell whence it has no further move within the original 61 cells in unpromoted form can immediately be promoted to its symmetric form. Promotion is optional if a move is available to a cell on the board's rim, and required if there is no further move anywhere on the board.