These variants spring from the effect of hex-ranked hex-prism boards on non-FIDE pieces, as described in the Honeycomb Chess page. In particular I noted how it preserves the difference in numbers of moves between Shogi generals. I therefore decided to start 2007 with variants using these pieces in that geometry.

In the original Honeycomb Chess putting two FIDE armies minus second King files on a 15-file board was easy, the files forming a trianglular prism of side 5. The corresponding number for two Shogi or Xiang Qi armies is 17, which cannot form so neat a shape. I rejected two 6-file level sandwiching a 5-file one as that would give concavities between the four corner files. I considered 19 files (6+7+6) with an empty cell either side of the royal piece but eventually rejected this too. Instead I decided to cut down the number to 16 (5+6+5), removing not only the second royal piece but also one of its companions. This gives a FIDE-modelled asymmetry of the kind found in Mitregi.

The arrays are easily edxtrapolated to my dual-direction variants, both straightforward and crossover-piece, with the same substitutions as in 2d. A little more work is needed to produce Honeycomb variants based on Yang Qi and Taijitu Qi, with some swapping of pieces in order to have equal numbers of all four long-range types. Finally, the 19-file board is indeed required for Honeycomb Mitregi (based even on Mitregi 90) in order to fit four of enough pieces in. 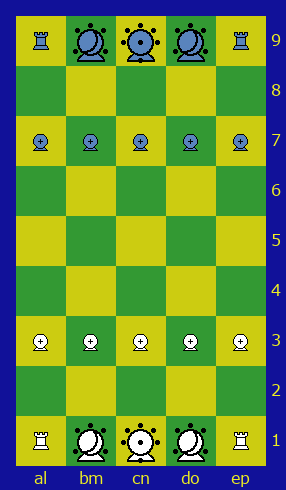 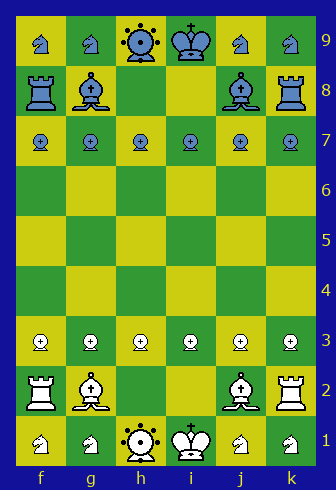 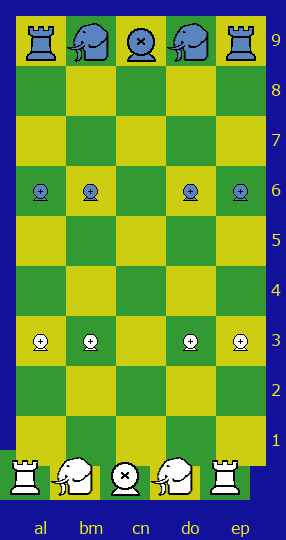 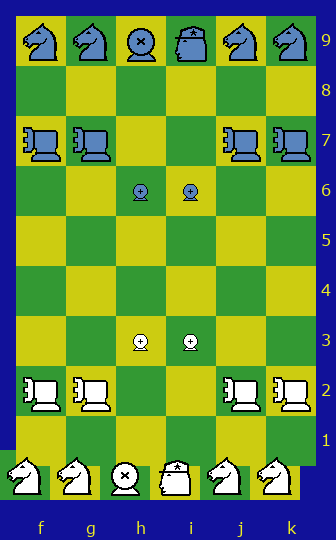 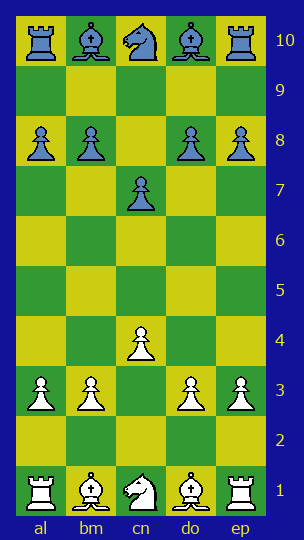 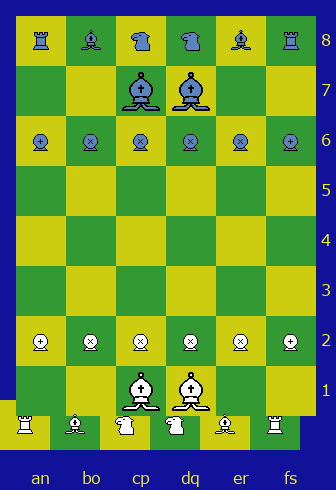 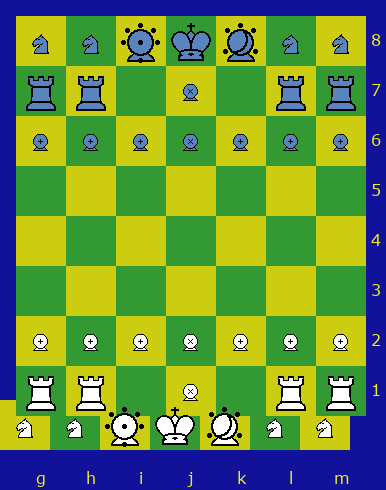 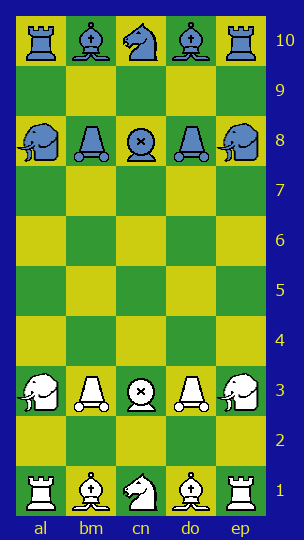 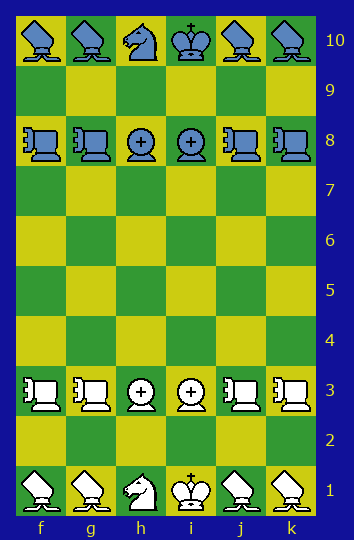 Pieces are the same as in the 2d variants, more than in any other 3d form of Far East games. Several side-effects are worth noting.
1: The Shogi/YQ/Mitregi/TQ King has over twice its 2d moves.
2: The other Shogi/Mitregi generals' numbers of moves still differ by one, the "5 for Silver, 6 for Gold" rising to 13 and 14. Also preserved is the Gold's ability to triangulate (forward diagonal, sideways and backward orthogonals, in any order), and the Silver's inability (as it always moves one rank forward or backward) to lose the move at all. These features make Silver-to-Gold promotion still valid. Contrast Tunnelshogi, which promotes Silver and Gold alike by adding triaxial moves.
3: The Bishop, Arrow, Mitre, and Cross becomes unbound, a minor detail in Shogi/Mitregi with promotability and return from capture but a major one in Yang Qi, making King Swaps unnecessary.
4: The moves of the XQ General and TQ Wazir are doubled to equal those of a 2d King.
5: The XQ/TQ Ferz becomes unbound within its Fortress, making 3 Ferzes a lesser oddity than would otherwise be the case.
6: The XQ/TQ stepping Elephant has the same binding as the TQ stepping Dabbaba - which on a board with an even number of identically-sized even-by-even would be the same 1 in 8 as a square-cell Elephant. On this board they are confined to 3 of the 5 ranks in its half of the board and 5 of the 16 files, multiplying to 3/16 of its half of the board, more than the 7/45 in 2d XQ. Top-level pairs are bound to one set of cells and bottom-level pairs to another, a compromise with the 2d "both Elephants on one binding" and covering 3/8th of their half between them.
7: The Silver, Bishop, Arrow, Ferz, and Elephant retain their inability to move within ranks, which are hex boards and so have no standard diagonal. Of these only the Bishop and Arrow can move different numbers of ranks, so the rest retain their inability to lose the move.
8: The XQ stepping Knight and YQ/TQ leaping Knight however become able to lose the move in 5 moves. The XQ pattern of being threatened by a Cannon but guarded by a Rook remains but in clusters of two of each.
9: The XQ (but not Shogi) Point gains 6 same-rank moves on promotion, retaining these on reaching the far rank. This is comparable with the promoted Princeling in Triaxial Qi.
10: YQ Pawn structure is somewhat strengthened, as Pawns can advance from the array and remain, or become, constantly protected by other Pawns.

Promotion is the same as in the square-cell variants.

Honeycomb Shogi has three Reserves: an initially-empty one per player, and a Neutral Reserve (NR) initially containing the two Golds and four Points that I couldn't fit in the array. A player promoting a piece may, as a bonus, transfer a piece from the NR to their own Reserve. Pieces enter the NR if captured by an unpromoted Point and into the capturing player's Reserve if captured by any other piece. A player can place a piece from their Reserve on the board, unpromted and whence it has a move in that form, as part of their own army in place of a normal move. A player cannot have more than one unpromoted Point on the same file.

Honeycomb XQ/TQ Elephants and Honeycomb TQ Dabbabas cannot enter the enemy half of the board.

The Honeycomb XQ General, Honeycomb TQ Wazir, and Ferzes in both cannot leave a Fortress comprising the first three cells each of General and Ferz files (12 cells aside in all).

Honeycomb Mitregi loses the 2d restrictions on reintroducing Bishops, Mitres, and Crosses on account of the board's unbinding effect.

Check, Checkmate, Stalemate, and in Honeycomb XQ Bare Facing are the same as in the square-cell variants.

As with other Honeycomb variants, a double-strength variant is possible. This enhances:
* same-rank orthogonals with hex diagonals strengthening Rooks to Duchesses, Generals to Granddukes, Cannons to Cannonades, Dabbabas to Dybbuks, and Superpoints to Supercounts (Wings and unpromoted Points are unaffected);
* standard diagonals with hybrid diagonals to strengthen Bishops to Pontiffs, Ferzes to Landlords, Elephants to Aldermen, Arrows to Arrowlines, and Mitres to Mediators;
* both to strengthen Kings to Worldrulers, Goldgenerals to Dukegenerals, Silvergenerals to Landlgenerals, Chatelaines to Worldduchesses, and Primates to Worldpontiffs;
* Knightwise with Foalwise and Bakerwise strengthening Helms to Helmbreeders and Knights to Nightbreeders. The XQ form of the latter makes a Wazir or Viceroy step followed by a Ferz or Rumbaba one.