This page is written by the game's inventor, Robert Hancock. 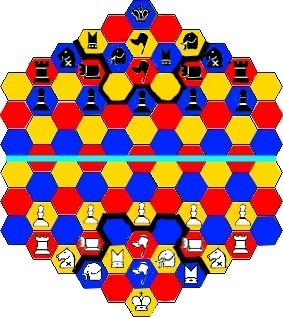 BANNER The Banner moves along the X-oriented spaces ( 60 or 120 degree angles ) as shown for any distance which is unobstructed. CANNON The Cannon moves orthogonally for any distance which is unobstructed. It can also move along the X-oriented spaces ( 60 or 120 degree angles ) one space only, but does not capture on such moves. The Cannon has a unique method of capture; it requires a â€œscreenâ€ piece located between itself and the opponent's piece along the same rank or file. The Cannon jumps over the screen onto the space occupied by the opponent's piece. The screen can be either a friendly or opposing piece, but there must be only one screen piece, it cannot jump over more than one piece. CHARIOT The Chariot moves in orthogonal directions for any distance which is unobstructed. It can also move one space only along the X-oriented spaces ( 60 or 120 degree angles ). ELEPHANT The Elephant moves as shown above to one of the six nearest spaces of the same colour. It can not be blocked by any piece on the adjacent spaces. Elephants can not enter or cross the river and are therefore restricted to a limited number of spaces of the same colour. HORSE The Horse's move is through any adjacent space for two steps, followed by one step at a 60 degree angle. If an adjacent space is occupied, the Horse is blocked in that direction, however it can â€œjumpâ€ any piece on the second step of its move. There are potentially 12 spaces to which an unobstructed Horse can move. KING The King or General can move to any adjacent space within the Palace ( indicated by the thick black lines ). Thus it is restricted to 11 spaces of the board. Note also that the King may never move to a space controlled by an opponent's piece, and the two Kings may never face each other along an unobstructed file, ADVISER The Adviser or Mandarin may move one space along the X-oriented spaces ( 60 or 120 degree angles ) within the Palace only. SOLDIER The Soldier moves one space directly forwards until it is on or has crossed the River, after which it can also move forwards at a 60 degree angle. On reaching the last row it is not promoted, but can move backwards or forwards along the last row. All pieces capture in the same way as they move, except the Cannon which must jump over one piece ( friend or enemy ) to capture the next piece beyond.

At the beginning of the game, the Soldiers on files 4 and 8 are under attack by the opponent's Cannons, but are protected by the Elephant and front Banner. An exchange of a Cannon for a Soldier would be a very disadvantageous move. As there are only 2 Elephants per side, no Elephant can ever access spaces of the 3rd colour, which is the colour of the spaces crossed by the River. APPROXIMATE RELATIVE POWERS OF THE PIECES [ Attacking strength only, defensive attributes not included ] CHARIOT 18 BANNER 18 CANNON 15 HORSE 12 ELEPHANT 6 KING 6 ADVISER 4 SOLDIER** 3 ( ** After crossing the River ) SOLDIER 2 ( Average ) SOLDIER# 1 ( # Before crossing the River ) 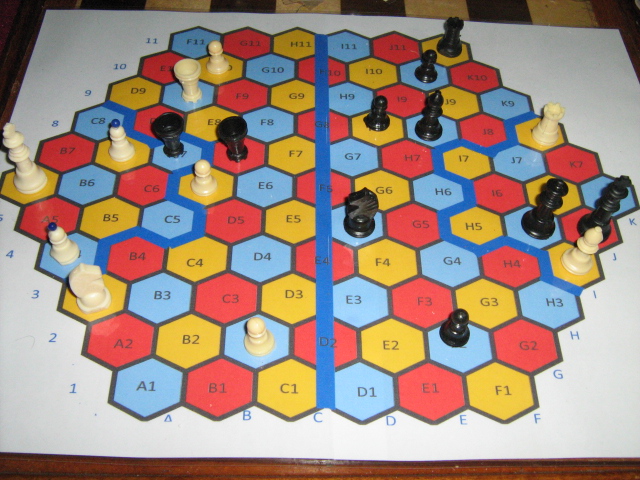