This page is written by the game's inventor, John Ayer.

Grand Ducal Chess is derived from Â Emperor Chess, invented about 1954 by Mr. H. R. Lambert of New York City. That game was played on a board twelve squares by twelve, each player having a white square at the right end of his home row. Each player had his king on the g file, and beside it on the f file a commander, combining the powers of rook, bishop, and knight. These pieces were flanked by queens on the e and h files, and those by emperors on the d and i files, and those in turn by bishops on the c and j files, and they by knights, with rooks in the corners. Pawns filled the second rank. The emperor was the real innovation in this game. It moves any distance diagonally, like a bishop. Along a rank or file it moves any EVEN NUMBER of squares. This is not a succession of leaps; a piece on the same rank or file as an emperor, but an odd number of squares away, blocks its motion without being in any danger. This could be described as a combination of a ferz-rider and a lame dabbabah-rider. Thus, while the emperor moves in the same eight directions as a queen, it is as color-bound as a bishop. Several flaws leap out at even a casual observer. First, seven pieces on each side have the bishop's move, and of these five can run along the black diagonals and five on the white. Also, five have the move of the rook. This is too much similarity. Second, the pawns are so far from the enemy's camp that they will never pose a credible threat, though their defensive power is intact. Third, the knights are so far from the heart of the action that they might as well not be there at all. Various remedies were proposed in comments on the game. I moved the game to the Courier Chess board, twelve squares by eight, restoring their proper weight to the pawns. I tossed out the commander and one queen, and put the other queen beside the king on the f file. They are flanked as usual by the bishops, and the bishops are flanked by the knights, properly positioned to perform their usual duties of contesting the center and screening the king and queen. The rooks stand in the corners, which seem to be a good place for them. The emperors, which are also long-distance runners, stand beside the rooks. This left empty squares on the c and j files. I filled them with pieces already on hand in my Courier-Spiel set. At j1 and j8, in the center of the king's wing, I placed a sage, moving as centaur. At c1 and c8 I placed a prince, moving as squirrel. There is no castling. After some consideration I have decided that pawns promote to Mann, which seems a reasonable reward but not overwhelming. Lastly, having learned that there is some ambiguity in the word "emperor," I renamed that piece "grand duke."

White's home row, from a1 to l1, is rook, grand duke, prince, knight, bishop, queen, king, bishop, knight, sage, grand duke, rook. Black's home row is the same, from a8 to l8. The second and seventh ranks are filled with pawns. 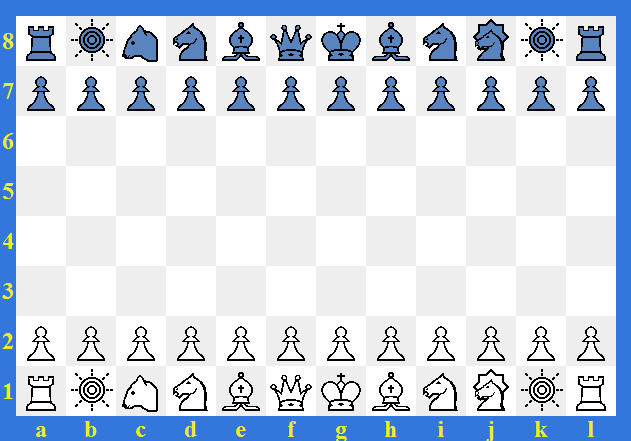 All the standard chess pieces have the standard moves, except as described below. The sage moves one square in any direction, or leaps like a knight. This piece is customarily called a centaur. The prince leaps to any of the sixteen squares on the second perimeter--the move of the squirrel. The grand duke moves like a bishop, or moves any EVEN NUMBER of squares along a rank or file, NOT jumping over any squares.

There is no castling. A pawn reaching the farthest rank is promoted to Mann, or man-at-arms, moving one square in any direction. All other rules are standard.

Untested variant: Archducal Chess: Replace the grand dukes with archdukes, each combining the powers of bishop and skip-rook; that is, jumping to every second square along a rank or file, or running along a diagonal.