Again I use a single King and twice the usual number of everything else, slightly enhancing oblique pieces. It is the latter detail that gives the variant its name. Again I nearly double the number of squares - this time from WEA Qi's 100 to 195, giving a piece density of just over WEA Qi's 48%. Squares are arranged in 13 files by 15 ranks, two Rivers dividing the latter into 3 equal blocks of 5. 14x14 with one River might seem closer to WEA Qi itself, but doubling every piece except the King (and in some cases its Pawn) does not suit even numbers of files. Besides, as I found when my Gnu Qi, Caliph Qi, and Tor Qi avoided one of WEA Qi's major sources of criticism, two Rivers are better than one when restricting the strongest pieces. 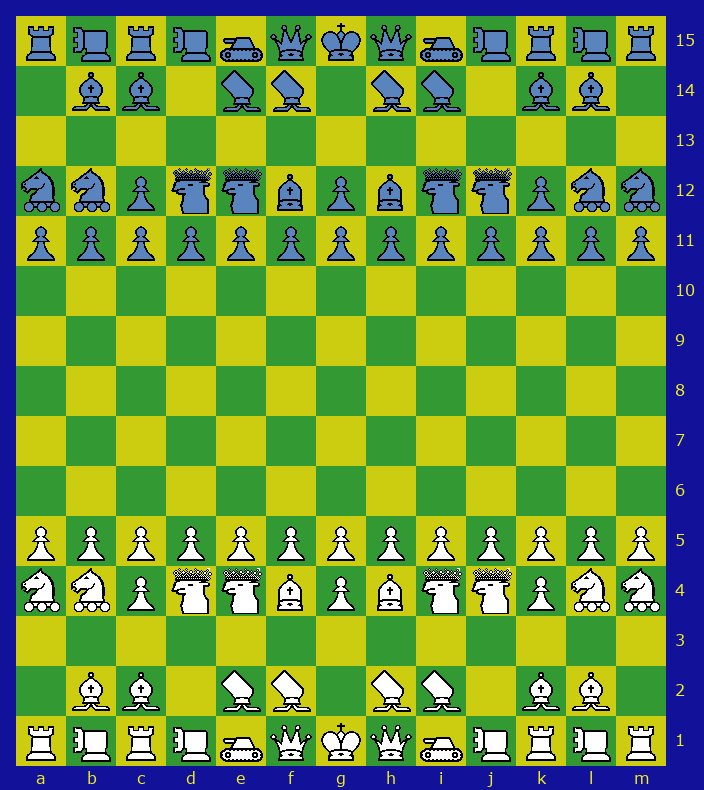 As the 2:1 Knight, its dual the 3:1 Camel, and their compound the 2:1 and 3:1 Gnu (or Wildebeest) come out of the enlargement rather weak compared to other pieces, I enhance them to Man and Beast 08: Diverse Directions pieces. For the Knight I have the 2:1 and 3:0 CATAPULT, for the Camel the Catapult's dual the 3:1 and 3:3 CAMPER, and for the Gnu the Catapult+Camper compound the 2:1, 3:0, 3:1, and 3:3 ACHATES. These were originally termed Endknight, Diacamel, and Fragnu, the last giving this game its name. Their radial moves are as unblockable as their oblique ones.

Five radial piece types are, as regards their general powers, the FIDE ones. The remaining array piece types - the Cannon, Arrow, and Tank - differ from the Rook, Bishop, and Queen in requiring an intervening piece when capturing. That piece may be of either army and is not captured itself. Finally the Wazir, which moves just one step in the Rook's directions, is not an array piece but occasionally occurs through Pawn promotion.

There are two Rivers in this variant. The King, Queen, Tank, and Gnu may not cross the far River. There are no restrictions on crossing the near River. This means that all pieces can interact on the middle ranks of the board and allows the same one-way Check by a King as in Gnu/Caliph/Tor Qi.

Pawns entering the enemy camp can optionally be promoted further to other array piece types, subject to not exceeding array numbers of any. Promotions available are as follows, depending on which rank of ether camp the move ends on:

Pawns reaching the enemy King rank with no array piece to promote them to become Wazirs. A Wazir returning to its own camp may be further promoted if its player has lost a piece in the meantime, with the same restrictions as for enemy Pawn promotion.

The variant can be played with two distinguishable pairs of identical sets with large/small Kings as King/Achates, Queens as Queen/Tank, Bishops as Bishop/Arrow, Knights as Catapult/Camper, Rooks as Rook/Cannon, and Pawns as Wazir/Pawn.

This size and shape of board would also suit a Nearlydouble version of Okisaki Shogi, as follows: 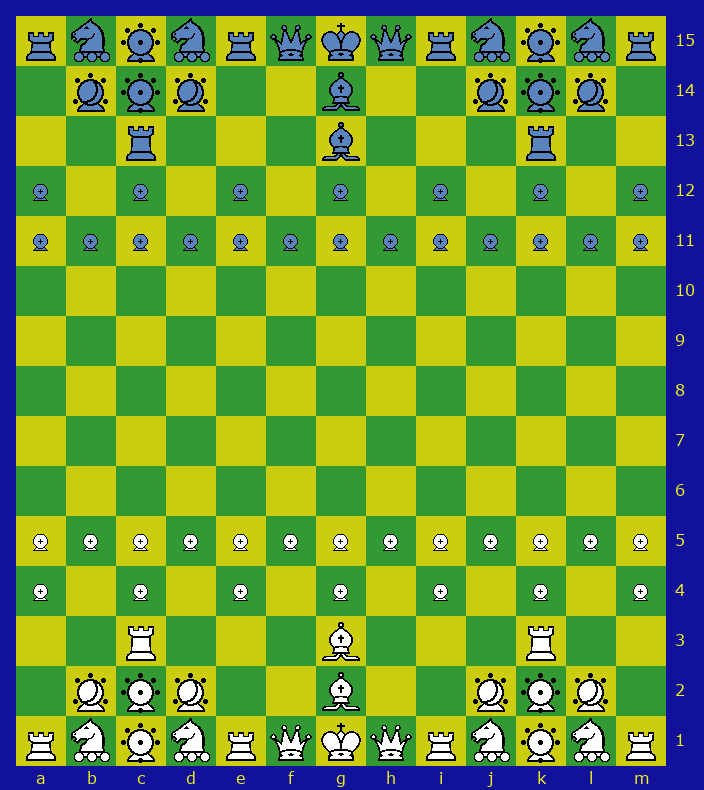