FlipFlop was invented in 2009 by Masahiro Nakajima, curator of The Museum of Abstract Strategy Games.

The game uses only one type of piece that switches between moving like a Rook and moving like a Bishop. Instead of a King, each player has a goal square that must be defended.

FlipFlop is played on a 5×5 board. Each player has five pieces, each with a + on one side and a × on the other. The pieces start with the + side up, White's pieces lined up on the first rank, Black's on the fifth. The squares c1 and c5 are specially marked goals, belonging to White and Black respectively.

White gets the first move. The players then alternate moves without passing. 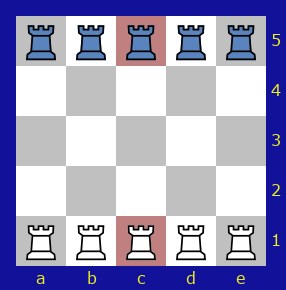 A piece with the + side up moves like a Chess Rook (

), and a piece with the × side up moves like a Chess Bishop (

). After each move, the moved piece must be flipped over.

Pieces may only be captured if they are on either player's goal.

Moving a piece to the opponent's goal is analogous to putting them in "check", and a player in check must capture that piece at once; a player unable to do so is checkmated.

A player can also win by leaving the opponent without legal moves or capturing all their pieces. The only way for a draw to occur is if the same position (with the same piece orientations) appears three times.

A smaller variant played with three pieces a side on a 3×3 board. The pieces are lined up on the first and third ranks, and the goals are located at b1 and b3. Rules are otherwise identical.

This seems to be one of the smallest interesting Chess variants around. 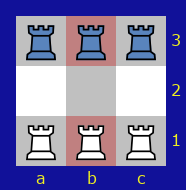 A four-in-a-row game played with four FlipFlop pieces a side on a 5×5 board, which starts empty. On their turn a player may drop a piece (either side up) or move a piece. Movement is as in FlipFlop, except that pieces may freely be leapt over and there is no capturing. The first player to arrange their pieces in an unbroken horizontal, vertical or diagonal line wins.

The diagram shows a winning position for White. 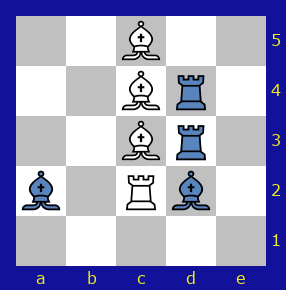 FlipFlop can be ordered online from the Spanish game publisher Nestorgames in a Standard Edition and a Deluxe Edition. Both editions also include the rules of FlipFour.

Additionally, printable boards and pieces are available for free at the inventor's FlipFlop page; look for the files FlipFlop.pdf and flipflop_flipfour.pdf.