Anglojewish Chess was a variant on a highly conventional board of hexagons forming a larger hexagon. Its distinguishing feature was the use of Curved hex linepieces, which I named based on a Jewish theme. One of the names has changed since. This inspired the Jewish army in Armies of Faith 2. That variant's pieces, except for the Fortnight which was also dropped in the progression to Armies of Faith 3, became the basis of both players' armies in Star of David 2 Level Chess, a variant on two triangular levels pointing in opposite directons. This inspired me to wonder about a variant using a star-shaped 2d hex board, and as the title suggests, here is that variant.

The board is a single six-pointed star, and as such perhaps a less obvious Star of David than the 3d variant, which suggests the internal lines. Nevertheless it is the best that can be managed in 2d. 3 Rabbis were sufficient to cover one level in AOF2 and AOF3, but the number was doubled to 6 to cover both levels in the all-Jewish SD2L. One SD2L subvariant replaced the Fortnight with a single unbound Cohen, but the other substituted the Sling, which shares the Rabbi's binding, and so had 6 of these as well. Returning to one level allows a reversion to 3 Rabbis, with the same number of Slings. This avoids the need to enlarge the horizontal dimensions even with the vertical one halved. This halves the 74-cell central Drum to 37 cells, while retaining the 6 corner bits.

The pieces included the basic set from basic AJ Chess, plus those additional SD2L pieces still meaningful on a 2d hex board. Relative to SD2L this meant having the Finch, and both Cohen and Sling. It also meant losing the King (which would have clashed with the General anyway), Knight, and Pawn. For a Pawn substitute suiting a star-shaped 2d board I settled on a modified Wellisch-orientation Point funnelling into the central file. Brokers and strictly Glinski-orientation Points could have run out of moves prematurely. I also found room for only a single Rook.

This board's geometry turns on its central file, the orthogonal connecting the Rook starting cells. Each player has their own ranks, defined as folded at the central file to go half-forward in both directions. No piece can move from an outer 6-cell triangle to another without going through the central triangle, either in successive moves (the only option for Sennights) or in the same move. Paradoxically each player's ranks apply to the entire enemy camp but not really to the triangular corners in its own. 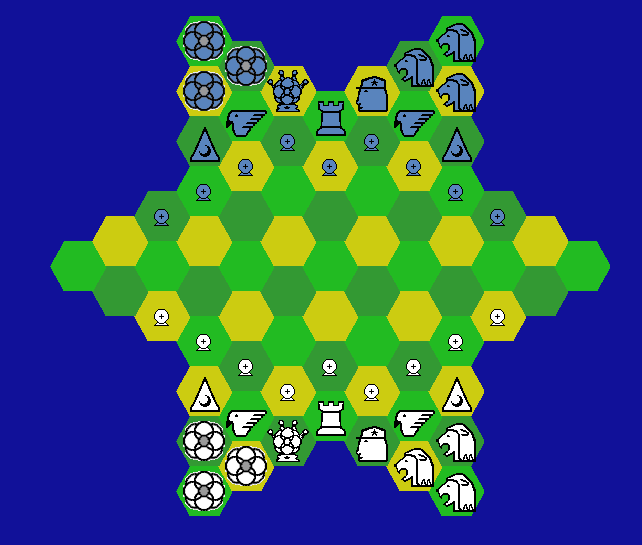 All Points except the centre one have an optional double-step noncapturing move along their file, but not 2 files inwards. They can be captured En Passant by an enemy Point if one is suitably placed on the next file out, but not the same file. The question of centre Points capturing En Passant never arises as they never leave that file.

A Point that can no longer move as a Point must be promoted to a stronger capturable array piece - usually, I suspect, to Cohen or Rook. There may be circumstances where underpromotion is worthwhile to prevent stalemate, and a Sennight or even a Sling may occasionally pose a more immediate threat than a Curved linepiece.

Piece numbers just exceed those of Shogi, but can be represented fairly simply by 2 distinguishable FIDE sets (say by size). The most obvious substitution is large King/Rook as themselves, small Rook as Cohen, large Queen/Bishops as Rabbis, small Queen/Bishops as Slings, large Knights as Finches, small Knights as Sennights, and a mixture of Pawns as Points. One option for the last would be to use all the large Pawns, and one small one for the central Point, marking out its inability to leave its rank until promoted. The spare Rooks can be used for a second Rook/Cohen by promotion, or inverted to improvise a third piece of some other type.

Note that although each Cohen's Finch starts En Prise to an enemy Sling it is also guarded by the Cohen itself, which the exchange will bring into a position from which it can break camp. Note also the results of moving either Sennight to the destination two files in. It may then threaten three enemy Points but two are guarded by the piece directly behind them and the enemy can both guard the third with a Finch and threaten the Sennight where it is in a single move.